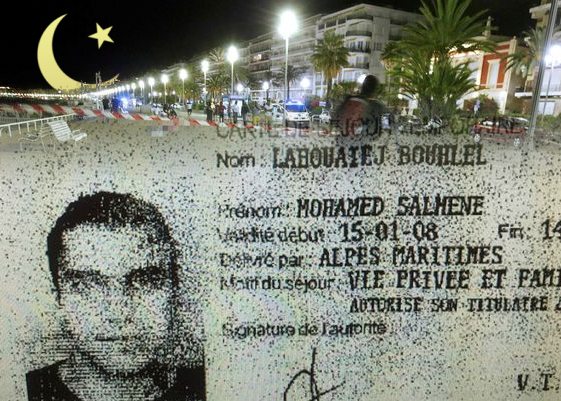 On Bastille Day of 2016, a 31-year-old Tunisian named Mohamed Lahouaiej-Bouhlel deliberately drove his truck into a crowd of people celebrating France’s national day in Nice. A total of 86 people were killed. The attacker was killed by police. Eight people are currently on trial in Paris, charged with aiding the terrorist.

Today, police in the French town of Auxerre in the Yonne Department arrested a 20-year-old man for disseminating hateful messages on social media against the victims of that attack, and supporting the attack itself.

Many thanks to Gary Fouse for translating this article from the regional daily L’Yonne républicaine:

A resident of Auxerre, age 20, arrested after a hateful message regarding the victims of the attack in Nice

On the morning of Tuesday, September 13, The Auxerre police arrested a resident of Yonne[1] (Department in France) age 20, suspected of being the writer of a hateful message on social media regarding the victims of the attack in Nice. He will be tried Wednesday, September 14 in an immediate appearance, by the criminal court of Auxerre. The defendant had already been convicted of expressing support for terrorism in 2020.

A young resident of Auxerre was arrested Tuesday morning, September 13, 2022 for writing a hateful message on social media on August 28, 2022, regarding the victims of the attack at Nice. He is suspected of disseminating images on social media of the truck that killed 86 people on the Promenade des Anglais, accompanied by the phrase, “Nissa[2] Sh** , 80 fascists disappeared”.

As indicated by our colleagues with Nice Matin, the national prosecutor in Nice had ordered the “opening of an investigation for support of terrorism”. In light of the “place of residence” of the alleged writer of the message, the prosecutor’s office of Nice “withdrew from the case in favor of that of Auxerre,” the national prosecutor of Auxerre, Hugues de Phily confirmed. The case was assigned to the Judiciary Police of Auxerre, who carried out the arrest of the defendant Tuesday morning in the city center of Auxerre.

“A few days from the start of the trial, some ignoble messages making reference to the attack on Nice are spread on social media. We are turning it over to the prosecutor. I call on the responsibility of those who disseminate information.

I am thinking of the victims and their loved ones”

The defendant, already known to police, is facing 10 years imprisonment since he is legally a recidivist. In 2020, a tribunal condemned him for the same offense.

The resident of Auxerre, age 20, was brought before the magistrates during the day and placed in pre-trial custody, in accordance with the motion of the representative of the public prosecutor. He is charged, precisely, “with publicly expressing support for an act of terrorism”. He will answer to these charges Wednesday afternoon within the framework of an immediate appearance.

A hearing before the criminal tribunal of Auxerre, which comes as the July 14 attack trial, expected to last three months, enters its second week in Paris.

9 thoughts on “Nice Truck Jihad Back in the News”