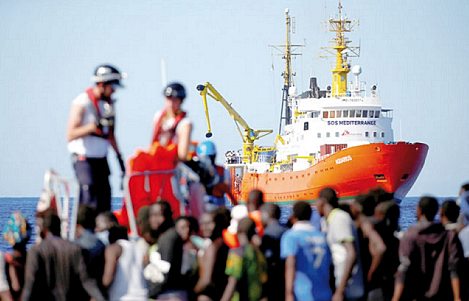 The article I posted earlier tonight talked about the increasing number of elementary schools in Germany that have an overwhelming majority of “migration background” pupils. The story below about advocates for the rescue of more migrants in the Mediterranean makes me wonder whether the goal is to push every last school in Germany over that magic 95% mark.

Many thanks to Hellequin GB for translating this article from eXXpress. The translator’s comments are in square brackets:

Several rescue organizations — including Doctors Without Borders — are calling for a coordinated European approach to the “rescue of refugees from the Mediterranean”. The frequency and number of lifeboats should be increased. [A chain of mines would be a much better idea. That would stop them in their tracks and save lives.]

Sea rescue NGOs Doctors Without Borders, SOS Méditerranée and Sea Watch are calling for the launch of a coordinated European-led search and rescue operation in the central Mediterranean to prevent further migrant deaths. In five days, the rescue ships of the three NGOs picked up the occupants of 16 migrant boats. The week before, the German rescue ship “Sea-Watch 3” had brought five boats with a total of 444 people to safety.

“Survivors will be returned to Libya, it’s not a safe haven”

“Without the presence of civilian search and rescue vessels in the central Mediterranean, children, women and men would have been left to their fate in international waters off Libya. Although we have always tried to coordinate our operations as required by the law of the sea, the Libyan naval authorities have almost never responded, thereby neglecting their legal obligation to coordinate assistance,” the NGOs complained in a press release. “When the Libyan authorities intervene and intercept boats in distress, they systematically and forcibly repatriate survivors to Libya, a country that the UN considers cannot be considered a safe haven,” it said. “Given the need, it is no longer enough to simply fill in the gaps in institutions in conducting search and rescue operations. Increasing operational capacity in the Central Mediterranean is an absolute necessity,” said Juan Matias Gil, MSF’s operations director.

660 migrants have been waiting for the landing port for days

While the Sea-Watch 3 completed the disembarkation of 438 people in the port of Taranto on July 30th and the Ocean Viking landed 387 women, children and men in Salerno on August 1st, the Geo Barents is still waiting for a solution for the survivors rescued seven days ago. There are 660 migrants on board the Geo Barents.

Within a week, 1,485 people were picked up and shipped to Italy. If more migrant steamers or similar are used, there will probably be several thousand invaders each week. That should make George Soros extremely happy: more death and misery unleashed unto the Europeans.

When will the European navies blow these ships out of the water? The moment these ships are put out of action and their crews and paymasters are sent to the bottom of the oceans into Ran’s Realm, this ongoing invasion will stop. It will also be better for the “Climate Change” agenda.

2 thoughts on “We Need to Rescue More Migrants!”