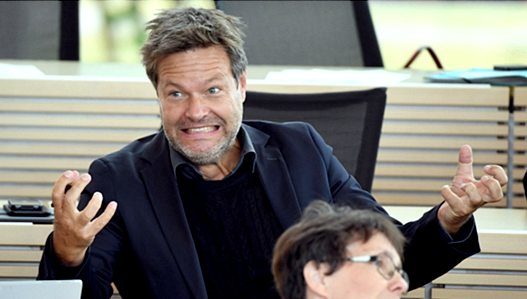 The energy crisis in Germany is severe, and getting worse all the time. The coming cold season looks to be disastrous for the general public, with unpredictable (but likely unpleasant) political consequences for the current government. Scapegoats will undoubtedly be required, and it looks like Economics Minister Robert Habeck may well be the first one.

“Pretty words are not enough”

The crash of Robert Habeck

These are tones that are rarely heard from the government factions about their own minister. But now there is apparently no stopping the SPD and FDP when it comes to Economics Minister Robert Habeck (Greens). The politician, always celebrated in the media, has become the target of massive attacks from within his own ranks.

The reason is the completely unsuccessful gas surcharge, with which consumers have to support energy multinationals. Now it turns out that even healthy companies can use it to further increase their profits. It was actually intended to save gas importers from bankruptcy.

The first to open fire on Habeck was SPD leader Saskia Esken. Last week she called for the gas surcharge to be changed and repeatedly referred to the responsibility of the Minister of Economics. Next failure: To save his head, Habeck wanted to lower the sales tax on the levy, but overlooked European law. Consequence: The EU banned him from taking this step.

Habeck styling himself as a victim is the last straw

When Habeck complained that things had — literally — “spoiled the day for the last 48 hours” and presented himself as a victim, numerous journalists jumped on the bandwagon and felt sorry for the minister. In the traffic light coalition*, however, more and more politicians were getting frustrated with the self-portrayal. In the case of Habeck, the others are always to blame, it was said. SPD parliamentary group leader Dirk Wiese put it in a nutshell in the Bild am Sonntag: “The Habeck principle works like this: appearances ready for film, technical implementation questionable and in the end the citizen pays for it.”

Other politicians from the SPD and FDP are now demanding that the minister submit a revised version of the gas levy by tomorrow’s government meeting at Meseberg Castle. Suddenly Habeck looks like a schoolboy who hasn’t done his homework.

His obvious incompetence is now being talked about quite openly: both SPD chairman Lars Klingbeil and FDP parliamentary group leader Christian Dürr accuse him of “technical errors”. These should be “eliminated by the cabinet meeting,” demanded Dürr in Bild. The gas levy should “under no circumstances lead to extra returns for companies”. The fact that the FDP accuses a Green of enriching large-scale industry does not happen that often. Dürr warned that Habeck had to be careful not to “make the energy crisis better for worse” with his interventions.

SPD leader to Habeck: “The substance has to be right”

The Liberal also called for an “extension of the nuclear power plants”, which Habeck is massively opposed to and is currently also receiving support from Foreign Minister Annalena Baerbock. [No surprise there.] The party friend, who described the abandonment of the nuclear phase-out on Sunday as “madness”, seems to be one of the few who is currently standing by Habeck. The SPD member of the Bundestag, Ralf Stegner, on the other hand, described his energy policy as “unfair” and called for “the gas surcharge to be renegotiated” in Meseberg.

SPD leader Lars Klingbeil had previously accused the Greens of “technical errors”. [They wouldn’t know how to spell the word “technical” in the first place.] Habeck undoubtedly has an interesting communication style, “and of course we notice that it is well received by the public,” he told Zeit-Online. At the same time, however, the Social Democrat warned: “In the end, it’s not just nice words that count in politics, the substance has to be right — that’s what we’re measured by.”

The coalition’s retreat is likely to be an uncomfortable time for the Economics Minister. In an interview with the ZDF Heute Journal on Sunday evening, Habeck was again allowed to blame “free riders” for his political failure [says the freeloader]. Will the coalition partners let him get away with it?

I’m pretty sure that the MSM will do the right thing, commission a few “representative” surveys and Habeck is already flying high again as a kite as the “most popular” politician in the “best Germany of all times”.

And if Robert should ever get a grip on it, the next “Green man/woman/trans” will surely follow in his footsteps. Competence has long since ceased to be in demand, but all the more wisecracking, embarrassing mistakes and gaps in knowledge are in utter vogue.

I took a closer look at this person: His four children all went to school in Denmark and also studied there! Because this air pump will have nothing to do with Germany… He didn’t write his children’s books alone either, but with his wife. I couldn’t find anything about the sales ranking, but I did find that a book is to be made into a film? This guy is probably more appearances than anything else, like all “good” WEF-fen SS soldiers! If the media continues to hype the Greens, even though it is known that nobody among them can do anything except parrot, then it’s going to end in the abyss. There’s a dirty game going on here, to slowly but purposefully drive Germans into the Great Reset’s mass grave.

4 thoughts on “Throwing Robert Habeck Under the Bus”