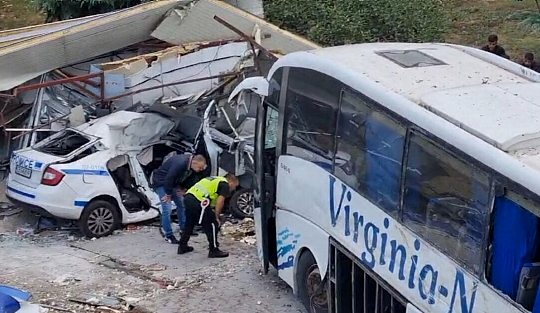 Many thanks to Hellequin GB for translating this article from Salzburg24. The translator’s comments are in square brackets:

Bus driver and passenger on the run

In the Bulgarian Black Sea city of Burgas, a man carrying 48 migrants crashed into a police car. Two officers were killed and the bus driver fled.

A bus packed with 47 illegal migrants crashed into a police car in the Bulgarian Black Sea city of Burgas early Thursday morning. Two officers aged 31 and 43 were killed. The refugees were unharmed, said Bulgarian Health Minister Assen Mejidiev. The driver of the bus is on the run. He and a passenger are being searched for, the minister said at a press conference on Thursday.

Traffickers with stolen bus on the way

“Initial investigations have shown that it was a deliberate collision with the police car,” said the chief prosecutor in the coastal city of Burgas, Georgy Chinev, about the course of events. The bus was stolen and was traveling with fake license plates. Before the accident, he sped past a traffic check twice without stopping. The passengers are mostly young men, but there were also women and children among them.

The driver of the bus and another person who fled the scene of the accident were arrested around noon, the police in Burgas announced. Both men are Syrian citizens with refugee status in Bulgaria. Interior Minister Ivan Demerdzhiev told the Bulgarian media that they organized the trip and traveled with them on the bus. At the scene of the accident, he declared that he would take decisive action against the gangs of people-smugglers. “They have declared war on us, and we will respond in the next few days with the full force of the law,” announced the minister. He wants to deport the smugglers by the end of next week and at the same time check all refugee centers in Bulgaria, because there are organized gangs of smugglers there. [No way, really? Now who would’ve thought?]

Bulgaria’s interior minister sees the problem with the border police for allowing such a large group of illegal migrants to enter the interior of the country. Demerdzhiev did not rule out the possibility that border police officers were involved in the illegal migration business across the Bulgarian-Turkish border south of Burgas on the Black Sea. “We have relevant information,” said the interior minister. He again warned that migratory pressure on Bulgaria had increased “enormously” in recent weeks. He therefore demanded better technical equipment, including drones, for monitoring the border with Turkey. The border fence built in 2013/2014 is currently being renovated. Bulgaria’s border with Turkey is the only land route from the Middle East to Europe. Bulgaria is considered a transit country.

Why is it that these Politicians are always so amazed when things like this happen? It shows clearly that they live a life far removed from the daily realities that the taxpayers encounter and have to live with. And woe betide those taxpayers when they start to defend themselves against those who treat the intrinsic value of the taxpayers’ lives with jackboots. Welcome to the Far Side.

3 thoughts on “The Wayward Bus”