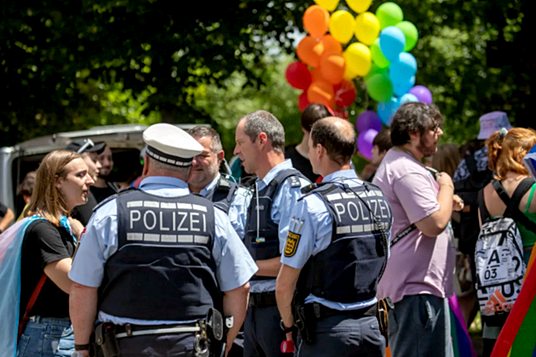 Federal Police: With a rainbow flag to the CSD in Munich

The federal police have announced that they will set an example for diversity on Christopher Street Day in Munich next weekend. Among other things, they will have their own stand at the CSD and hoist the rainbow flag on the buildings of the Federal Police Headquarters in Munich. “The Federal Police are as diverse and colorful as our society — and we show it. It is important to me that we can make a contribution so that people — especially from the LGBTI community — can feel safe. No matter where, no matter when,” emphasized the President of the Federal Police Headquarters in Munich, Karl-Heinz Blümel on Tuesday. [Safe from WHAT? The Federal Gestapo? The “New Germans”? From Corona or the jab? What does that rag protect you from?]

That’s why they want to show with their own stand that there are also members of different sexual orientations in the Federal Police. It’s about setting a sign of solidarity with “colleagues of different sexual and gender identities.” [And what about Solidarity with ALL Native German people for a change? But that would mean that they have nobody that they can easily beat up and terrorize.] “The community is represented and visible in the police force through LGBTI colleagues.” During the two-day CSD celebrations, the Federal Police also want to use the stand to provide information about “hate crimes against LGBTI people and other groups in our society”. [I can already guess which groups that will be: the ones with the politically and correctly induced CLOUT.]

Rainbow flag: not the first time present with the police

Another sign is planned with the hoisting of the rainbow flag at the office buildings. “The presence at the CSD (Christopher Street Day) as well as the raising of the rainbow flag are a sign of solidarity with all people who are affected by discrimination and exclusion due to their sexual identity.” [Yep, and straight people need not apply.]

The rainbow flag had previously flown at the Federal Police building in the Bavarian capital on the occasion of the International Day Against Homophobia, Biphobia, Interphobia and Transphobia on May 17th and on the commemoration of Christopher Street Day on June 28th. [And what about their phobia of traditional families? The cornerstones of each and every successful society. Those they are allowed to destroy unhindered and with the blessing of the corrupt state.]

This so-called “Rainbow Flag” is nothing more than a symbol of perversion and a corrupt political system in its final convulsions — at least I hope so — and every day it seems to be getting more and worse. Is there something in the air? In the water? Or is it in the syringe? one might ask. I’d have to answer NO to that, because this mental rot comes out of the “politically correct” early education system and finally through a good dose of academentia into politics. This clearly shows that learning confers no guarantee of virtue, because the evidence stands before us.

…has been written throughout Western education in invisible letters over each and every kindergarten, school, college and university.