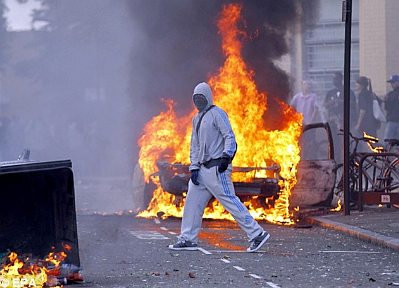 Many thanks to Gary Fouse for translating this editorial from De Dagelijkse Standaard:

The government cabinet has now gone completely crazy. Minister [Karien] van Gennip [Minister of Social Affairs] has announced that “unemployed French youths from problem neighborhoods” are welcome in our country. Then they can “get to work” in the catering industry or greenhouses. By “problem neighborhoods”, she means this: The French suburbs, a.k.a. ghettoes, where barely-integrated foreigners live.

Over the years, French suburbs have turned into outright ghettoes. Life is scary. Entire hordes of foreign youths sit all day staring ahead, terrorizing everyone on the street, refusing to work, and creating a situation in which the police dare not enter the suburbs.

Incredibly, the government cabinet, through Minister of Social Affairs Van Gennip, has announced that they want to bring this type of youth to the Netherlands. So that they can get to work in the catering industry or greenhouses.

“In France there is really high youth unemployment, especially in the suburbs,” the CDA Minister says in Algemeen Dagblad. “Much higher than we know here. I could imagine that we might invest in the French or, for example, Spanish school dropouts, letting them work here in the catering industry or horticulture. There are Spanish youths working here now in cafés and restaurants.”

This is really crazy. The French ghettoes are known for their sky-high crime rates. It has become Hell there for people who respect the law and want to live in a respectable manner. And what does this cabinet want to do? Bring youths from that sort of neighborhood to the Netherland — that is, youths who grew up in the French suburban culture.

Why would a clear-thinking person want that? It is without a doubt bad for the Netherlands.

Well, Van Gennip also has an answer. Because this woman says she feels responsible for social problems in other EU countries.

“I feel a great responsibility for the one million Dutch people who are still on the margins,” she says. “But if we want to function as one Europe, we must also worry about youth unemployment in other European countries.”

11 thoughts on “What the Netherlands Needs is More Culture-Enrichers!”