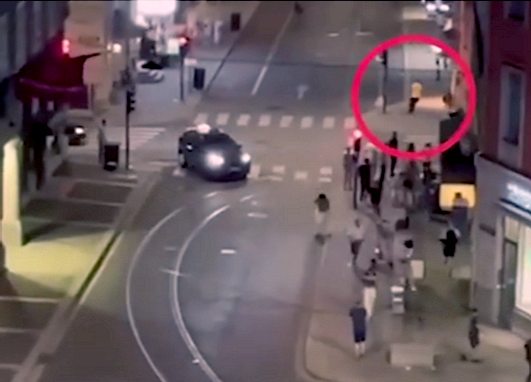 As I reported on Saturday, an Iranian-Norwegian named Zaniar Matapour went on a shooting rampage at a gay bar in Oslo during the Pride Festival, killing two people and wounding dozens more.

The two pieces below, both translated by Gary Fouse, discuss the incident from Flemish and Swedish perspectives, respectively.

The first is an editorial from Vlaams Belang website:

Attack in Oslo was Islamist terror

Two were killed and 21 injured in a terrorist attack at a gay club in the Norwegian capital of Oslo. The perpetrator was a Norwegian of Iranian origin, and the police have classified the attack as Islamic terror. “How many attacks are still necessary before the Left sees the danger of Islamic fundamentalism?” asks Member of Parliament and BiZa [Interior Ministry] committee chairman Ortwin Depoortere. “If we do not stop mass migration and Islamization, Europe will just become more dangerous. In the meantime, our security services have to track down and smoke out as many Islamists as possible.”

In a shooting Friday evening in the Norwegian capital of Oslo, two people died and 21 others were wounded. Eight of them were taken to a hospital, three of whom are reportedly in serious condition. The attack is considered “an act of Islamist terror” by the Norwegian intelligence service PST. The suspect is a 42-year-old Norwegian of Iranian origin with ISIS sympathies. Since 2015 he has been on the radar of the intelligence service for radicalization, and he had a past record of violence and threats. As a result of the attack, the terror threat level in Norway has been raised to the highest level. Originally planned for this week was a Pride parade in Oslo, but it has been canceled due to the attack and the heightened terror threat.

“This shooting is the umpteenth terror attack in Europe in the space of a few years,” says Depoortere. “And each time it is Islamist perpetrators with a heartfelt hatred for the West, which was detected by our intelligence services.”

“The self-proclaimed progressives who pretend that they stand for gay rights and more migration from Islamic countries would do better to reflect and realize that each is opposed to the other,” concludes Depoortere. “It is thus important that we implement a halt to migration. In the meantime, our security services have to track down and smoke out the Islamist terror cells. These are deadly elements in our society that are living under our noses, but they have to be removed as a priority. With radical Islam present, we will always have to look over our shoulders. And whoever sows more Islamization will reap terror.”

The second article is from Swedish state TV:

After last weekend’s act of violence in connection with the Pride Festival, several media sources are reporting that terror suspect Zaniar Matapour, 42, has connections with the leader of an Islamist organization. The man was previously convicted of shooting at a Jewish meeting place.

“They were earlier neighbors,” confirms Matapour’s lawyer without going into many details.

After the shooting on Friday night, which deprived two persons of their lives, Matapour has been deprived of his liberty.

On Monday a large number of media, including Aftenposten and NRK, reported that he is in the circle around Arfan Bhatti, who in 2021 co-created the organization Prophet’s Ummah.

As early as the same year, according to Norwegian Public Service, the group was investigated by the Norwegian Security Police (PST) after they threatened “a new July 22nd” — the date of the right-wing extremist terror attack on Utøya and in Oslo.

NRK further reported that Bhatti, on June 14 of this year, posted a picture of a burning Pride flag on social media. At the time there was also a quote on this profile picture calling for the killing of homosexuals.

The men reportedly drove together in a car

At a press conference over the weekend, PST reported that Matapour and Bhatti recently rode in the same car in connection with a demonstration against the burning of a Koran. Information that Matapour’s defense attorney, John Christian Elden, did not comment further on other than writing to TV2:

“My client was neither reported nor arrested during the ride as far as I know.”

The lawyer also reported that he had no details about the relationship between his client and Bhatti — other than that the men were neighbors.

As recently as May, the PST had contact with Matapour after he, according to their information, showed an interest in statements that were perceived as violating Islam.

The country’s justice minister has announced that both the police and PST will be investigated concerning the way they handled the information they had earlier about Matapour.

SVT is seeking an interview with Chamber Prosecutor Ingvild Myrold.

2 thoughts on “The Islamic Terror Attack in Oslo: Swedish and Flemish Perspectives”