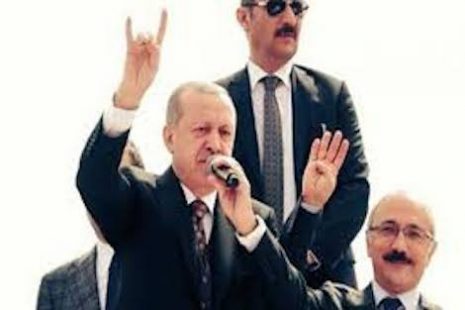 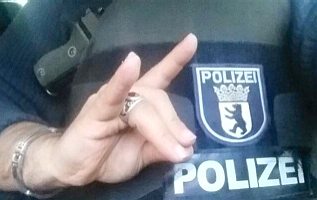 Turkish-German police officer making the sign of the Grey Wolves

Ms. Faeser is a good socialist, so one of her top goals is to fight right-wing extremism. Unfortunately, the interior ministeress seems to be unaware that she has been buddying up with the Islamic fascists of the Turkish Grey Wolves, among other extremist Islamic organizations.

Above all, Nancy Faeser wants to fight right-wing extremism. Nevertheless, she does not recognize the signs of the largest right-wing extremist organization in Germany — and happily shares their supporters as examples of integration. Only later did she distance herself.

In her short time in office, Nancy Faeser has drawn attention to one issue in particular: the fight against right-wing extremism. This has the highest priority in her house, as she has repeatedly and unmistakably made clear.

But as Minister of the Interior, Nancy Faeser also takes care of other projects: one of them is the “Constitution Students” project. This project is intended to offer young people “time and space” to “discover and experience democracy for themselves” — especially young people who have not felt “touched” by democracy up until now, and thus turn them into “constitutional students”. Faeser proudly tweeted a photo of these “constitutional students” today: The project is “very close to her heart. It creates spaces, encounters and role models to experience democracy,” she writes.

It is important that young people get involved in socio-political matters. But young people have to find a way to get involved. That’s why the project of the #constitutional students is very important to me. It creates spaces, encounters and role models to experience #democracy.

The problem for Faeser: not everyone wants to “experience democracy”, as the photo shows. The picture quickly became an embarrassing tweet for the minister: in the last row of the photo, several young men are gathered, making various hand gestures into the camera. One of them is the “wolf salute” of Turkish right-wing extremists. The hand sign with two spread fingers symbolizes a wolf and has always been the greeting of the Turkish fascists, the “grey wolves”. Grey Wolves is a generic term for anti-Semitic, homophobic, racist right-wing extremists in Turkey.

To the left of this, another is pointing his finger to the sky — a Muslim sign of commitment to Allah [tawhid, the oneness of Allah], which gained worldwide fame via the Islamic State. To his right (located, maybe also ideological) several boys show the so-called “Rabia hand”, which is considered a sign of the Muslim Brotherhood. A fascist-Islamist hat-trick, one could cynically state — and three huge own goals for the largest “counter-right” fighter in the Federal Republic, who apparently cannot even recognize the hand signal of the largest right-wing extremist group in Germany, the Grey Wolves. Only after numerous Twitter users pointed out the Fascho boys in the last row did she tweet a slight distancing.

The picture clearly shows that some of the “constitutional students” show political extremist gestures. That a constitutional minister might not have known her… #Hmmm … That she’s spreading the picture despite numerous references to it… #Puhhh … pic.twitter.com/9c6bqyUqHr

In 2020, the SPD even wanted to ban the “grey wolves” and approved a corresponding motion in the Bundestag. Faeser probably didn’t get that memo — or even her term right-wing extremism is a dishonest, halved one that only wants to see “white right-wing extremism.” Whatever the reason for this own goal — sloppiness, naivety or willful blindness — it is and remains a big own goal from the greatest “right-wing” fighter of all time.

After criticism, Nancy Faeser reacted. Meanwhile, the tweet, including the image and the anti-democratic gestures it contains, remain online.

The symbols shown in the picture by some students are unacceptable, I strongly condemn this. We are in talks with the project sponsor about this.

Here we see a typical left-wing “politician” who still doesn’t realize how much she is despised by these invaders, but shows great “understanding” for them, and doesn’t know anything about them or their culture. Well, if she wants to make a fool of herself, she definitely deserves it.

Here’s what a friend sent to me, before Nancy Faeser deleted her tweets.

Camicea (@camicea) To name just 2 of the numerous reposts on Twitter about Faeser… whose names don’t exactly sound organic German and they should know!

@RonaiChaker • 6h
#constitution student? IS sign, sign of salvation from the extreme right-wing Turkish Gray Wolves, the R4bia hand sign of the Islamist Muslim Brotherhood, who call for sexual assaults on women.

The anti-constitutional students of the left-wing interior minister @NancyFaeser show the wolf salute of the Turkish right-wing extremists, the rabid salute of the Islamofascist Muslim Brotherhood and the hand signal of the IS. #Horseshoe Theory in 2022.

It’s quite telling, isn’t it?