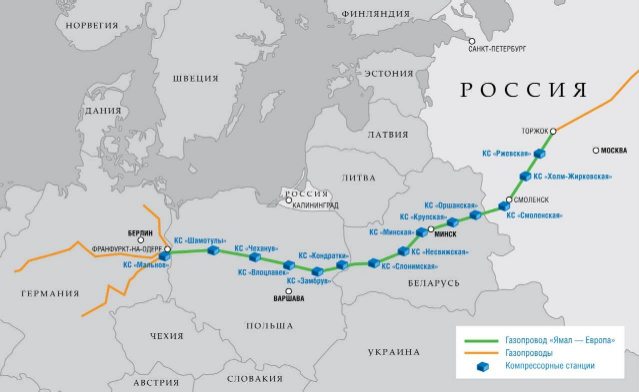 It looks like sanctions against Russia are beginning to bite, but in this case they’re biting back against Poland and Germany.

The German economics minister is confident that Germany will be able to make up the gas deficit from other sources of supply, but here is the key clause: “albeit at higher prices”.

Many thanks to Hellequin GB for translating this article from RTDE.website (which seems to be RT’s workaround after it was banned in Germany):

Russia responded to the European sanctions on Thursday with countermeasures. The effects of the counter-sanctions on the European energy market are gradually becoming apparent: now, with the gas transit through Poland, one delivery route is no longer available.

The Russian gas supplier Gazprom announced on Thursday that it would stop supplying gas to and through Poland. The reason is Russian counter-sanctions, which also affect the owner of the Polish section of the Yamal-Europe pipeline.

Russian sanctions imposed on a number of foreign energy companies prohibit Gazprom from using the pipeline, owned by EuRoPol GAZ (a joint venture between Gazprom and Poland’s PGNiG, which owns the Polish section of the Yamal-Europe pipeline) to supply Russian gas through Poland, said today the spokesman for the holding company, Sergei Kupriyanov.

“A ban on transactions and payments in favour of sanctioned persons was imposed. For Gazprom, this means, in particular, a ban on using the gas pipeline owned by EuRoPol GAZ to transport Russian gas through Poland,” as Kupriyanov justified the decision.

As he further explained, the Polish side has repeatedly violated the rights of Gazprom as a shareholder of EuRoPol GAZ, and at the end of April put the Russian company on a sanctions list, which means that it is no longer able to exercise rights to shares and other securities of the joint venture exercise, nor to receive dividends.

It also became known on Thursday that Gazprom will no longer supply gas to its former subsidiary Gazprom Germania due to counter-sanctions imposed by Russia. In the past, at least part of Germany’s gas imports from Russia were handled via Gazprom Germania.

Federal Economics Minister Robert Habeck announced today that he was not concerned about the security of gas supplies in Germany. The affected gas volume could reach Europe and Germany via other contracts and new bookings, albeit at higher prices.

Previously, Ukraine had halted the part of the gas transit using a compressor station in the Lugansk region. According to estimates, around a third of the transport capacities of the Ukrainian gas pipelines were lost as a result.

This is what globalism looks like in a nutshell when there’s discord in the house and everyone throws a temper tantrum. But I guess those in seats of power — and by that I don’t necessarily mean political power — couldn’t give a damn whether the little people perish while trying to finance their own survival and the Elites’ lavish lifestyle.

5 thoughts on “Turning Off the Tap”