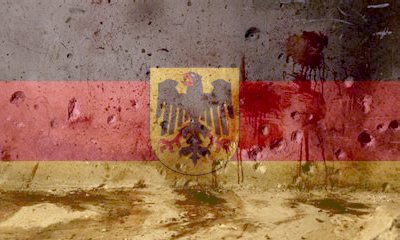 Culture-enriching violence in Germany has been intensifying recently. The two stories below, both translated by Hellequin GB, discuss turf battles in North Rhine-Westphalia between what are essentially organized crime mobs.

The first article, from the Westdeutsche Allgemeine Zeitung, reports on the latest incident of biker-’n’-clan violence in Duisburg:

Duisburg: Shots in Biker and Clan dispute in Hamborn

More than 100 participants from the clan and biker milieu attacked each other in Duisburg on Wednesday evening. Four wounded by gunfire. Four people were injured in a shootout on the Hamborner Altmarkt in the north of Duisburg on Wednesday evening. Witnesses had alerted the police after two groups of men apparently engaged in an argument in which firearms were used — including live ones, the police reported.

“The motive for the dispute is so far unclear,” said the police and public prosecutor’s office in Duisburg on Thursday night. A homicide commission has begun an investigation.

According to the police, numerous shots were fired. “Shot volleys were also fired,” reported a spokesman on Thursday morning when asked. When the first police squads arrived, many of those involved fled. Two injured people were taken to hospitals by ambulance, police said. Two of the refugees later sought medical treatment themselves. According to the police spokesman, it was gunshot wounds that were said to be serious but probably not life-threatening. A total of 15 people were provisionally arrested by the police. To secure evidence, the fire brigade illuminated the crime scene with searchlights, the police said.

More than 100 participants? Many fled when the police arrived

The control center initially confirmed an operation with four injuries and a crowd of people around 8:40 p.m. on Wednesday evening. The crime scene is said to be in the area of a bakery on Richterstrasse, according to information from this editorial team. There the people involved in the conflict were shot at. Later, the events were “dynamic,” the police said.

According to witnesses, more than 100 people may have gathered at Hamborner Altmarkt, the police said. There was talk of up to 200 people; the police could not confirm the number on Thursday morning. The people suddenly appeared on the Hamborner Altmarkt on Wednesday evening and then attacked each other. The situation is said to have been confusing, the police reported. The argument lasted a few minutes, a police spokesman said on Thursday morning. In the end, several of those involved attacked a kebab shop on Harnackstrasse, smashed furniture and destroyed the shop window, the spokesman said.

Police operation in Duisburg-Hamborn: volleys of shots can be heard on Internet videos

Numerous shots can be heard on a video that is circulating on Twitter, among other places. According to eyewitnesses, numerous shell casings lay on the asphalt. At the same time, gatherings are said to have taken place in other cities in the Ruhr area, such as in Essen and in Oberhausen, the police spokesman said in the morning. Ultimately, however, no connection could be determined, and there were probably no incidents, said the spokesman. The injured, who were taken to nearby hospitals, were being monitored by the police.

Police: participants from the biker and clan milieu

Those involved are believed to belong to the biker and clan milieu, said a police spokesman in the morning. He did not give details. There are “overlaps” in the case of those arrested, he said. “We have identified people who can be assigned to groups,” confirmed the police spokesman Stefan Hausch in the evening. Alexander Dierselhuis, the new Duisburg police chief and proven clan expert, interrupted his business trip to a conference of German police chiefs when he heard about the incident, and wants to comment on Thursday. The evaluation of the leads continue.

Police are looking for witnesses and more videos of the crime

Witnesses who can provide relevant information about the crime or the people involved are asked to contact the Criminal Police at 0203/280-0. Photographs or video recordings made during or after the crime are of particular interest to the investigators. There had already been a mass dispute on Hamborn’s Altmarkt in March of 2018. The police were able to prevent worse things at that time. 50 people had then faced each other. Among other things, a machete and other weapons were found on them.

The translator adds this video link:

In the best Germany of all time: Culture-enriching clan shootout with bikers in Duisburg

The second article (from Bild) reports on the casual dismissal by a Green Party leader of the violence in Duisburg:

After a Shootout on the Street

Green leader considers the clan problem to be “blown up”

Duisburg/Düsseldorf — campaign maneuvers or ignorance? Verena Schäffer (30), leader of the Greens in the North Rhine-Westphalia state parliament and internal spokeswoman for the party, caused anger and shaking of heads with her statement about the bloody feud between Bikers and Clan members at a market in Duisburg (four seriously injured, BILD reported).

In the WDR [regional broadcaster] she said that clan crime was a “broadened topic” by Interior Minister Reul. She received harsh criticism on Twitter. “Blinded…” and “out of touch” is what it says. The NRW Interior Minister Herbert Reul (69, CDU), whom she criticized, told BILD: “This is about the most serious crimes and organized crime. Anyone who talks about an exaggerated problem in the face of these pictures obviously has no idea about people’s sense of security.”

Duisburg’s mayor Sören Link (45, SPD) also has no understanding: “Perhaps Ms. Schäffer should compare her assessment of the relevance of clan crime with reality from time to time. A conversation with the people who had to fear for their lives in Hamborn could help there.” In 2021 alone there were almost 5,500 clan crimes in NRW. Criticism also comes from the Police Union GdP. NRW’s GdP boss Michael Mertens: “When it comes to fighting crime, it’s not merely nice talking that helps, only clarity and truth.”

When asked by BILD, Felix Banaszak, chairman of the Green Party in Duisburg, commented on the controversial statement made by his party colleague: “The massive outbreak of violence in Duisburg makes it clear that organized crime — regardless of whether it comes from the biker milieu, from clans or mafia structures — must be fought in a targeted manner and with all severity.”

Citizens would rightly expect the state to create security in public spaces and not tolerate such outbreaks of violence. The ability of the constitutional state to act is not shown by media staging, but by seriousness and sustainable concepts.

Banaszak: “In order to take consistent action against organized crime, the Criminal Police, for example, urgently need to be strengthened. Unfortunately, not enough has happened in this area in the last five years.”

Yep, as exaggerated as the left-wing extremism?

Schäffer posted on 2.5.2022 on Twitter: To all Muslims in NRW, a nice and blessed Sugar Festival. One looks in vain for a happy Easter for Christians, so it cannot just be election campaign maneuvers or ignorance, but pandering.

Perhaps Verena Schäffer should do a tour of certain districts in North Rhine-Westphalia so that she can visualize the failure of politics and the result of false tolerance, or alternatively speak to the police or accompany them on an operation. Or even better, she should venture there on her own to learn first-hand what “cultural enrichment” really means.

9 thoughts on “The Wild One Comes to Duisburg”