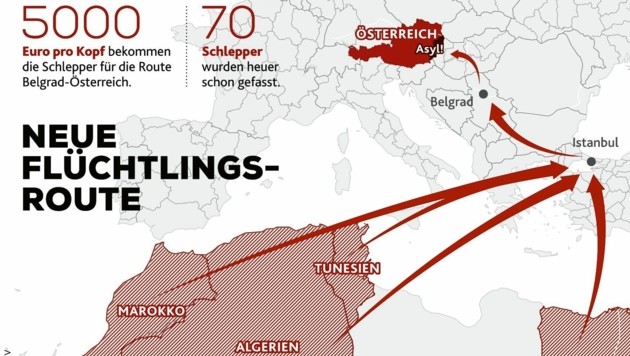 Fly the friendly skies to asylum in Austria!

There’s a new Balkan Route for culture-enrichers who long to wage Asylum Jihad in Europe. They simply buy an air ticket from North Africa to Istanbul, and then board a second flight to Belgrade, where people-smugglers take them across Hungary to asylum paradise in Austria

Many thanks to Hellequin GB for translating this article from Kronen Zeitung:

“Asylum!” — Escape to Europe by plane

Not only is the number of arrests in Burgenland increasing dramatically. More and more migrants are flying to Europe quite legally, and only after landing, with the help of smugglers, make their way to the EU via new refugee routes. The “customers” pay almost €5,000 to their criminal companions. Shocking images are only too well remembered by any political observer as desperate emigrants from North African countries faced a life-threatening struggle to reach the Italian island of Lampedusa across the Mediterranean. At the peak of this wave of refugees, more than 2,000 migrants made it to the island within 24 hours. Many future compatriots no longer take this risk.

Legal with a passport

You buy plane tickets, pack the essentials in a small backpack, and off you go to the airport! “The new refugee route is the airlift from North Africa to Istanbul in Turkey and from there to Belgrade, Serbia,” report Austrian border officials abroad. The refugees travel legally with their passports.

“Once they land in Belgrade, most migrants throw away the passport or send the travel document back to their home address,” police officials say, based on research. From the Serbian-Hungarian border, many migrants are brought to Austria by smugglers: “Asylum!”

More and more North Africans are using the new refugee route by plane. The numbers alone prove that. From January to April 2021, a total of 2,000 migrants were discovered and registered in Burgenland. More than 200 of them were from Morocco, Algeria, Tunisia, Egypt and Turkey. In the same period this year, 8,000 migrants have already been reported at the border with Hungary.

More than 1300 of them disembarked from Morocco, Algeria and the other three states mentioned. “More refugees are expected in the weeks leading up to the summer,” insiders say. The total number of asylum seekers has already almost quadrupled. Concerned mayors from the border towns are asking themselves: “What else has to happen before high-level politicians react?”

No matter what else happens, the politicians will not react. At least not in the interests of the concerned mayors and the population. On the contrary! Anyone who shows up without papers should be put on the next plane and off they go back home. Unfortunately, our new Gröfaze (megalomaniacs) react completely meaninglessly. Everyone who sets foot on European soil, whether criminal or terrorist, gets a new passport if they don’t have any papers to show. The real causes of flight and people smugglers lie within our governments. That’s what it looks like.

This is what happened to my mother a few years back when she needed a new German ID.

After a week of unsuccessful attempts to apply for a new ID card (in front of the counter: “We’re on our lunch break; come back in the afternoon.” or the door opens in front of the waiting line: “End of work; come back the day after tomorrow”, then slammed shut again) the lady at the counter said to her: “Your ID expired yesterday.”

Officer: “Can you identify yourself ?”

She gave her her ID. “The document is invalid. You need a valid document to identify yourself. Do you have your birth certificate with you?”

My mom: “No, I haven’t needed it since my first ID. I’ve moved many times. Don’t have one any more.”

Official: “Have a new one issued in room so-and-so and then come back.”

They couldn’t help her in said room; they wanted to know in which registry office it was issued. In none. Her birth certificate was a handwritten note with an angel on it, issued by the village priest in 1946 where she was born and baptized. Who knows if there are still documents, since the old church had been pulled down and a new “modern” one erected twenty years or so ago. Also, she hadn’t been there in years. She later tried her luck in the neighboring town. Her expired passport, which had expired months ago, was accepted there without further ado.

3 thoughts on “The Ottoman Empire Strikes Back”