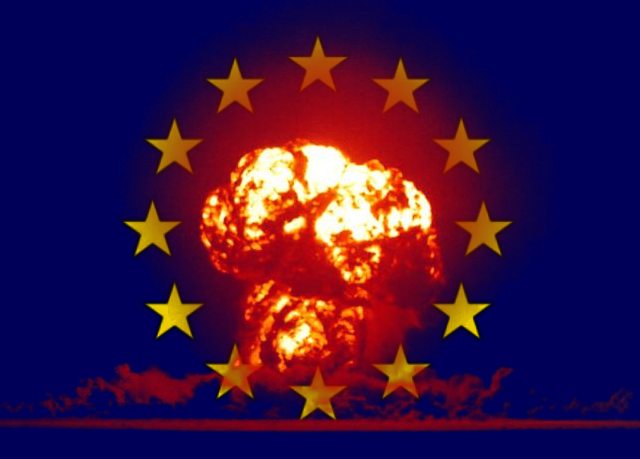 Or: How I stopped worrying and learned to love the bomb.

The foreign minister of the new coalition government in Germany is a politician from the Green Party named Annalena Baerbock. Ms. Baerbock seems to be preparing her constituents for the possibility that Germany’s (and the EU’s) aggressive support for Ukraine may result in the onset of nuclear war with Russia.

According to Foreign Minister Annalena Baerbock (Greens), the Federal Government is also preparing for the use of nuclear weapons in the Ukraine war.

Baerbock told the Rheinische Post and the Bonn General-Anzeiger (Tuesday): “A nuclear power is waging a war of aggression on our doorstep, which is why it is our responsibility as a government to take even the worst-case scenarios seriously. Russia’s nuclear saber-rattling is irresponsible in the current situation, even though we’ve heard similar tones from President Putin before.”

However, one cannot use nuclear weapons without harming oneself. The Russian President also knows this. At the same time, Baerbock threatened the ruler in the Kremlin with an indictment before the International War Crimes Tribunal in The Hague.

“The Russian President is breaking with international law and international humanitarian law in the most brutal way. You don’t bomb mothers, fathers, children, the elderly or the sick. People who do this commit the most serious war crimes. These crimes must be brought to justice. We owe that to the victims,” said Baerbock.

These idiots are handling nuclear war very carelessly and immaturely. Nobody can win it.

Russia also has much more effective nuclear weapons than USA/NATO.

Russia has vastly superior ICBM systems such as the new SARMAT-2 missile with up to 15 MIRVs and Hypersonic Glide Vehicle (HGV) capability. That means Russia is capable of launching a single ICBM capable of nuclear strikes on 15 US cities at once without risk of interception by US defense forces. And, as far as I know, Clinton signed something that makes it impossible for the US Military to retaliate when the launch is detected. They literally have to wait for IMPACT before they can fight back. A pretty grim outlook, if you ask me.

Keep in mind that the overall context of all this seems to be a plan to cancel the 2022 midterms by throwing America into a World War before November, accompanied by a domestic police state/martial law response that now includes an actual Department of Truth run by Homeland Security (DHS).

And then there’s Russia’s “secret weapon” in reserve: underwater nuclear drones that could unleash a radioactive tidal wave against the US or Britain. At least that’s what I heard.

I wonder how all of this can be brought ideologically under the umbrella of “Save the Planet”?

But what do I know — I’m not a parasite and politician.