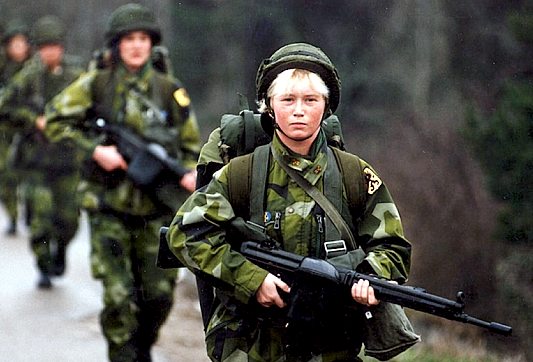 It has been clear for at least forty years that Sweden is the leader when it comes to the feminization of the culture. Norway and Denmark are close behind, followed by the rest of Western Europe and Canada, and then by the United States.

Gender equity in the armed forces can only be imposed without consequence as long as the feminized military does not have to confront an all-male enemy on an actual battlefield. When that happens, the female (and genderqueer) corpses will pile up rapidly, with political consequences that are difficult to predict in advance.

Many thanks to LN for translating this essay from the Swedish blog Invandring och mörkläggning:

The Dutch social psychologist Geert Hofstede is known for his studies of national values. On two occasions he collected extensive data from IBM employees in 53 countries, first in 1968 and again in 1972. He received 116,000 responses to questions about attitudes and preferences. In the 1970s, he organised the material into five themes and summarised them in a “cultural dimension theory”. Hofstede then scored the countries and compared them with each other. His study has attracted a lot of attention, mainly because the conclusions are based on such a large body of material. Hofstede is one of the 100 most-cited social scientists in the world.

On the basis of his vast material, Hofstede established no fewer than 76 criteria for male and female. Japan came first among the masculine countries. Both the United States and Germany are also high on the ranking list. Among the most feminine countries, he placed Sweden in first place, with Norway second.

Note that the data is now a half-century old and that Sweden has since become even more feminised. In most universities and colleges, women are in the majority among teachers and researchers. Six out of eight parliamentary parties have female leaders. We have a female prime minister and there are twelve women and eleven men in the government.

In the media, the imbalance is probably even greater. I have not looked for studies that show this, because it is so obvious both to me and to others who follow Swedish news reporting. Women, women and more women both report and are interviewed on every conceivable subject. This female expertise covers everything from football and ice hockey to advanced and male-dominated high technology to gang crime, which is almost 100% a male activity. We find out how women think, what they find interesting and how they want to solve various social problems.

One of the traditionally most male-dominated professions, policing, is represented in the Police Federation by a woman. This is only right. In 2019, 33% of Sweden’s police officers were women. In total, 44% of all police employees are women. Among civilian employees, women are in the majority, a whopping 67%. When 43% of those admitted to the police training programme in Malmö were women last year, Caroline Mellgren, who oversees the unit for police work and police training at the university, was very happy and hoped that the trend of more and more female police officers would continue.

A couple of years ago, a young, beautiful female police officer explained that when she and other female officers took the metro home from late-night duty in Rinkeby’s new police station, they needed an escort. If there had been only male police officers there, would they have made that demand? Hardly; they would realise it was ridiculous. If they felt unsafe on their own, they would have to arrange to protect each other. But for a graceful and good-looking female police officer, the question of an escort was certainly relevant, and I don’t think she would then feel entirely comfortable being escorted by another young and attractive female officer.

Recruitment films for the Armed Forces are another example. In the American ones, it is crystal clear that the military is a male profession and also a very physically demanding one. In the Swedish ones, either the main characters are women or they are gender-neutral.

Now, war is not just any activity. It’s about killing your opponents, winning. A country that does not recruit optimally efficient soldiers, but deliberately reduces efficiency for ideological reasons, will be responsible in war for more soldiers dying, both men and women. The reason is that these mixed corps of soldiers are likely to fight against opponents who are all men. In that case, it is a question of not really wanting to win, which is the same as losing, and since it is a question of war, it can be said to be a form of social suicide. Nor should it be forgotten that in war people are injured. Women are less able than men to cope with injuries.

The Swedish armed forces do not reason in the above way. For example, Sweden’s Nordic Battle Group of elite soldiers had a standing lion with a not very prominent erect penis in its coat of arms for many years. Outraged by this symbol of masculinity, a group of female soldiers complained to the European Court of Justice. Swedish politicians listened and removed the offending member. Swedish heralds protested, but were not heard. The lion was literally castrated.

In the autumn of 2016, the Swedish Armed Forces released a new handbook for Swedish military personnel. It makes it quite clear that in Sweden the Armed Forces prefer political correctness to efficiency. There are several so-called gender advisors in Swedish units. The goal, according to Jan Thörnqvist, who is responsible for the Swedish Armed Forces, is to be far ahead of other countries. As the book says: “Swedish units can also contribute to raising awareness within multilateral organisations of the importance of the gender perspective. This can be done by developing gender-inclusive reporting formats and proposing gender mainstreaming in meetings and plans.”

At the same time, the state has a reasonable responsibility to choose the optimum solution for important social services. I think that if the people had a choice, the distribution between male and female police officers would be more clearly skewed in favour of the men.

But if, for reasons I will not go into here, the people also choose women for these posts, then it is the duty of the state in a democracy to make not an ideological but an efficiency-optimal choice. Which means: women in higher positions are welcome, but if physical strength and other male “virtues” are required, then it should be men — and also women who meet the requirements for men. Ultimately, this is about competence. Police officers in Rinkeby should not have to ask for an external escort when they go home from work.

Is this a reactionary perspective? Yes; reactionary means reacting, and it is right to react to stupid decisions. I and many others react to the politicisation of society. At its core, it is totalitarian when politicians neither listen to what citizens want, nor look out for the best interests of citizens.

In a totalitarian state, ideology wins out over both democracy and optimal choices.

24 thoughts on “The Estrogen Revolution”