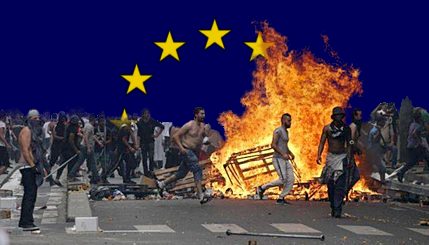 According to Europol, the EU is destined to become more and more like Mexico, with rampant corruption, lawlessness, and violence.

The highest European police authority Europol warns of an extreme increase in violence on European streets. Europol director Catherine De Bolle speaks to the Welt am Sonntag of a “level of violence on the European streets that we have never seen before. So far we only knew that from Latin America.”

De Bolle described the decryption of the EnchroChat chat application used by Criminals as a major blow to organized crime. This has given us a whole new understanding of how organized crime threatens European security, the rule of law and democracy. [I wonder who’s responsible for that?]

De Bolle said: “Our conclusion is: We underestimated the danger. “Drug trafficking continues to play a major role for criminals. Cartels have recognized that it is worthwhile to produce certain drugs in Europe. “For example, we discovered synthetic drugs from the Netherlands on the Brazilian market, which surprised us a lot,” said De Bolle.

Of the around 2,000 tons of cocaine produced annually in the Andes region, 60 percent is now destined for the European market. In the past, most of the production was intended for the US market.

In addition to the violence and drugs, the extent of corruption was also underestimated. More than half of the criminal organizations use corruption, for example to persuade dock workers to cooperate in drug smuggling. There are also very specific threats. “Criminals take photos of the target’s wives and children to pressure him into cooperation.” [….and our respective governments are using what methods to threaten us with? I cannot see the difference.]

80 percent of criminal organizations would set up legal businesses [Big Pharma] in addition to illegal businesses in order to launder their money. “Illegal business is infiltrating our economy and destabilizing the system,” De Bolle warned. [I guess they don’t like competition.]

It was only a matter of time before conditions like those in Latin America would prevail in Europe, with a number of cities in Sweden already being shaken by street violence. In Germany, stabbings and shootings are on the rise, well on their way to Swedish conditions.

Just a look at Mexico reveals what “rosy” times could lie ahead for people in Europe: There is now hardly an area in the second largest country in Latin America where the illegal Mafia does not rule. One could also say that organized crime is engulfing the whole country like an octopus, also made possible because the state is on the one hand incapable or unwilling and on the other hand often enough makes common cause with the cartels.

Of course, our great Politicians did not underestimate the danger, but knew exactly what they were doing. It’s all planned like that, so that Klaus Schwab, Bill Gates and George Soros can ride in with their NWO cavalry and save the peons from the bad guys.

7 thoughts on “The Cartelization of Europe”