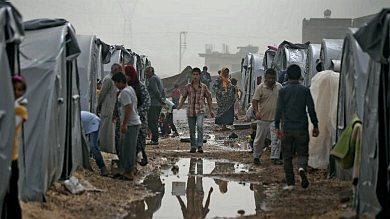 The Turkish government is evidently getting tired of hosting all the refugees who are being held in camps along the border between Turkey and Syria. In an attempt to deal with the problem, a million culture-enrichers will be sent back to Syria, according to Turkish president Recep Tayyip Erdogan.

Erdogan plans to return a million refugees to Syria

Turkey is home to around five million refugees — the majority come from Syria. President Recep Tayyip Erdogan wants to send one million of these back to their homeland. The project has a voluntary basis and is “fairly mature”.

Turkish President Recep Tayyip Erdogan wants to send around a million refugees back to their Syrian homeland. The voluntary project, in which local and international organizations and representatives of affected regions are also involved, is already “fairly mature,” said Erdogan on Tuesday in a video message for the inauguration of thousands of log houses for refugees who want to return to Idlib in northwestern Syria.

The majority of them, over 3.6 million, are Syrians who fled their homeland before the 2011 civil war. According to Erdogan, around 500,000 of them have returned to “safe zones” set up by Turkey along its border since 2016.

Erdogan is facing growing public resentment over the presence of the refugees in Turkey. He fears the issue could dominate next year’s presidential and parliamentary elections. Aid organizations are concerned that the refugees will be used as a scapegoat for the country’s problems in the 2023 election campaign.

At some point, the long-term stay should come to an end. There have been tensions between Turks and Syrians in Turkey for some time, and dissatisfaction with refugees is growing. And when they leave, I’m pretty sure which direction they’re going to go. Syria’s foreign minister said in an interview in February 2022: “Syria Says: Exiles Should Return Home”. The call has predictably not been answered and died down, one or the other probably knows the reasons for that.