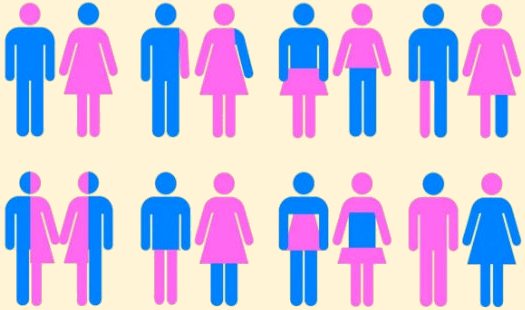 The pace of the Culture Wars is picking up as far as deviant sexual behavior is concerned. It wasn’t enough that homosexuals, lesbians, and transsexuals not be discriminated against: now their proclivities must be actively celebrated and promoted. Furthermore, standard “gender binary” behavior — what used to be called “heterosexuality”, or even the “norm” — must be deprecated, discouraged, criminalized, and, if possible, eradicated. We’re still well over 90% of the population, so that’s a major task for the woke social engineers who mean to usher in the New Licentious Global Utopia.

Below are two articles about brave soldiers who are defying the Powers That Be on the front line of the Gender War. The first one (in German) concerns a former Minister of the Interior in Finland who is being persecuted for citing heterosexual marriage as a normative standard.

Many thanks to Hellequin GB for translating this article from Tichys Einblick. The translator’s comments are in square brackets:

Causa Räsänen: With the EU, marriage between a man and a woman could become “hate speech”

The newly rolled-out trial against Päivi Räsänen could serve as an opportunity for Brussels to make hate speech an EU-wide criminal offense in the future. Anyone who postulates that marriage between a man and a woman is the only valid one, or speaks of “gender insensitivity” could end up like the Finnish interior minister.

The Päivi Räsänen case is a proxy war over freedom of expression. It could become a precedent concerning the red lines of what may be said — and put religious freedom on the index like traditional European values. The police have been investigating the committed Lutheran since 2019 because she criticized the cooperation of her church with the “Pride” movement.

A tweet in which she quoted a passage from Romans became the stumbling block. Further investigations turned up a 20-year-old pamphlet to support Räsänen’s “hate speech”: In it, together with Bishop Juhana Pohjola, she had represented the traditional Christian understanding of marriage and family. The title? “Male and female he created them”. Pohjola also ended up in the dock.

Both sides want a precedent

The staging was reminiscent of a show trial. The public prosecutor found the Christian motto “Love the sinner, hate the sin” to be too much. Yes, the word sin alone was already “hurting”. For the observer it was clear from the start that an example was to be made here of how far the Moloch of the new woke ideology could go. To the relief of most involved, the trial ended in acquittal. The Finnish public prosecutor’s office had to bear the costs. It was a victory for freedom of expression — but a premature one.

The public prosecutor’s office appealed the verdict last Friday. Räsänen, a member of the Finnish Parliament, said she was “dismayed”. At the same time, she sees it as an opportunity. The prosecutor’s decision could lead to “the case going all the way to the Supreme Court, which offers the opportunity to set a positive precedent for freedom of speech and religion for all Finns.”

At this point one can rightly ask: Where does the doggedness with which a former Finnish minister (2011-2015) and party leader (2004-2015) is being humiliated and dragged in front of the qadi come from, because she maintains convictions that still exist, maybe not shared by everyone, a few years ago, but were still considered completely acceptable? It is reasonable to think that there is also a desire on the other side to set a precedent that will break all dams in terms of hate speech.

Dissenting opinions as a crime? There is no doubt that panic is currently reigning in the left-liberal milieu. Whether it’s Elon Musk’s Twitter takeover, or the possible revision of “Roe v. Wade” by the US Supreme Court: Things are not looking good for the hegemonic course of the “progressives”. But a glimmer of hope on the horizon beckons to the awakened and enlightened. It is a document from the EU Commission that has been sitting in a drawer since December 2021. The content? The extension of EU criminal offenses to “Hate Speech” and “Hate Crime”.

In its draft, the Commission warns that hate speech and hate crimes have increased both online and offline. They have become a “worrying phenomenon”. In view of this, an EU-wide approach is necessary. With the exception of a single study cited, which data the Commission relies on and why the national states cannot implement such a regulation themselves remains non-transparent. The basis is also interesting. Not human rights, but opaque “EU values” are used as justification.

The Commission does refer to Articles 2 and 6 of the Lisbon Treaty. But where the legitimacy to ban “all forms of hate crimes and hate speech” comes from, even if it relates to “gender identity”, remains vague — the term is not found in either article. On the contrary, the treaty signed 20 years ago is extremely reactionary when it interprets dual gender as the norm. Article 2 knows only the “equality of women and men”.

Of course, that won’t stop the EU Commission from wanting to implement its woke ideas across the entire EU area — to the detriment of the free word. “Hate is hate — and nobody should put up with it,” is a quote from Commission President Ursula von der Leyen at the beginning of the document. [She would know, since she’s been spewing quite a bit lately.] Anyone who commits a “hate crime” in Germany can then also be arrested in Portugal.

Brussels and the national governments would thus have an instrument with unknown effects on freedom of expression. The outcome of the Räsänen case is therefore a signal for the EU Commission. As Paul Coleman, director of ADF International, the organization representing Räsänen, put it in the European Conservative: “Instead of introducing a minimum standard of protection for freedom of expression, the EU is trying to do the opposite: introduce a minimum standard of criminal censorship. But is the prosecution of a political leader, because they hold deep-rooted beliefs, really something we want to be big on across the continent?”

It’s becoming clearer by the day that what we’re seeing is the merger of secular and ecclesiastical powers into one big monster. A kind of Sharia law on steroids. Something the Christian Church never really managed.

The second article concerns a case across the border from Finland in Sweden. Until recently the Swedish language contained just two pronouns that could be used for the two sexes: hon (she) and han (he). Ten years ago the politically correct ruling caste introduced a neologism: hen, which is a non-discriminatory gender non-binary neuter pronoun that can be used indicatively of anyone, even space aliens.

A new test case concerning the use of pronouns arose last year when a young schoolteacher committed the heinous offense of refusing to refer to one of her pupils as “hen” when requested to do so by the creature’s parents. She has already been fired from her job, but now faces the possibility of losing her teacher’s license as well.

First she was fired from her teaching job, and now the Swedish Schools Inspectorate is considering reporting her to the Teachers’ Liability Board, which could result in her being stripped of her teaching licence as well.

Last summer, the case of Selma Gamaleldin attracted a lot of attention after she was fired from her job at the Waldorf school Solvikskolan in Järna. The reason was that she had refused a parent’s request to use the pronoun “hen” for one of the boys at the school.

She likens it to a form of abuse, given the trend towards more and more gender reassignments involving surgical procedures and hormone treatments leading to sterilisation, many of which are later regretted.

“Children can play at being someone other than who they are, but this is not a game. It is serious for parents, and it is a serious development in society. I don’t want to be part of it or have something like that on my conscience,” she said at the time.

In February, the DO [Diskrimineringsombudsmannen, Equality Ombudsman] ruled that discrimination had taken place and that the boy should be awarded SEK 150,000 in damages.

Now things have been taken a step further as Selma Gamaleldin also risks losing her teaching licence. Last Friday she received a registered letter from the Swedish Schools Inspectorate saying that it had opened a case “on the basis of information that has come to light in a case with the Discrimination Ombudsman”. The aim is to investigate whether a report should be made to the Teachers’ Liability Board.

“In the event of such a report, the Swedish Schools Inspectorate may request that the teacher be given a warning or that his or her licence be revoked,” the authority writes.

“This has gone quite far in Sweden. Saying ‘hen’ is compulsory, and now it is a serious crime if you do not obey,” says Selma Gamaleldin to Världen idag.

Several people have reportedly encouraged her to appeal if she loses her licence.

“They have said this may be a fight I need to take up so that others are not sacrificed in the future. It’s become a pilot case, and if they win, it will affect all teachers in the future,” she says.