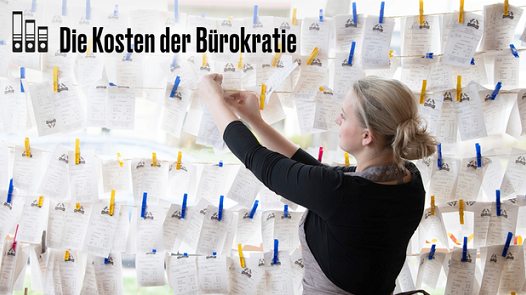 The already swollen German bureaucratic state is set to become even more gargantuan, given the presence of two bloat-loving socialist parties in the governing coalition.

Many thanks to Hellequin GB for translating this article from the German-language service of the Epoch Times. A reminder — the “traffic-light” coalition consists of the three parties (red=Social Democrats, yellow=FPD, green=Greens) that make up the current coalition government:

758 additional civil servant posts are to be created in the federal ministries. This is reported by the ARD political magazine Report Mainz after an evaluation of the draft budget for 2022. According to this, there will be a massive increase in jobs compared to the end of the Merkel era.

Even the Ministry of the Interior wants a further 103 employees, although a separate ministry is being set up for the area of construction and housing; Construction Minister Klara Geywitz claims 104 new posts. When asked by Report Mainz, the ministries justified the increase in jobs by citing the management of new tasks that would result from the coalition agreement.

More state secretaries than ever before

According to the personnel overview of the draft budget, 128 highly paid civil servant posts are also planned, the so-called B positions with a monthly salary of up to €15,000. Additional personnel costs of around €60 million per annum result from the salary groups of the established posts.

This includes the secretaries of state. Transport Minister Volker Wissing (FDP) has two additional state secretaries, for a total of six. Habeck has one more thanks to his position as Vice Chancellor. And in the new Building Ministry there are three state secretaries. With a total of 71 parliamentary and civil servants, the traffic-light government employs more than any other government before it. 20 years ago under the Schröder government there were 48.

Every parliamentary state secretary triggers a cascade of additional costs: personal annual income, costs for secretarial staff, and company cars and drivers add up to around €500,000 a year.

The transfers to temporary retirement due to the change of ministers are also expensive: A query by the magazine of all federal ministries showed that 32 civil servants were placed on temporary retirement after the change of government. All have been highly-paid B11 and B9 grade civil servants who are now entitled to a pension. Already in the last legislative period, there was a massive increase of 2,500 jobs in the federal ministries.

Do these people actually have any morals or empathy for their own? Not from what I’ve seen. Apart from the sprawling Bundestag, which gets bigger after almost every election, the civil service is growing and growing. These posts are supplied and are available from “self-service shops”, while the taxpayer — who must hold a second job — has to grudgingly pay for it and no longer knows where his family’s next meal is supposed to come from. This is reminiscent of Reinhard Mey’s song “Das Narrenschiff” (The Ship of Fools).