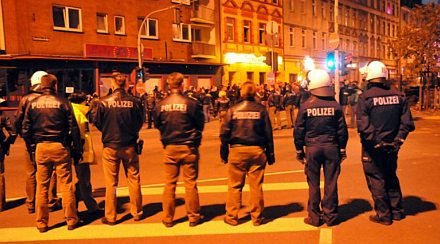 That’s what the Federal Ministry of the Interior would have you believe. They’re taking gaslighting to a whole new level.

The 2021 Police Crime Statistics show many decreases in crime, but also some increases in certain areas.

A few days ago, the Federal Ministry of the Interior published the police crime statistics for 2021. Federal Minister of the Interior Nancy Faeser explained that the crime statistics show a positive development in most areas and the clear-up rate has risen again. “We are a very safe country and a strong constitutional state,” assured the SPD minister. [I almost spewed my coffee over the keyboard.]

More sex crimes [I wonder why?]

Only in a few areas of crime was there an increase in the number of cases compared to the previous year. For example, the offenses in the group “rape, sexual coercion and sexual assault, especially cases resulting in death” increased by 1.5% to 9,903 cases in 2021.

There has been a sharp increase in child sexual abuse. Here the number of cases rose by 6.2 % to 15,507 cases. In addition, an extremely high degree of distribution of pornographic writings was found: 50,206 cases (+87.8%).

Although there was a slight decrease in violations of the law by foreigners by 0.2 % to 146,853 cases, the number of cases of unauthorized entry within this category rose by 7.7 % to 41,290 cases.

As was announced, the security authorities identified 1,892,003 suspects. That was 3.9 percent fewer than in the previous year. Three-quarters of them are male.

The deputy leader of the CDU/CSU parliamentary group, Andrea Lindholz, attributes the success of the declines since 2017 to the “strengthening of the police and modernization of police powers” — “in particular the good work of the previous union-led federal government”. “The traffic light coalition [Red=Socialists, Yellow=FDP, Greens] and above all the Federal Minister of the Interior will have to be measured against this in the coming years,” said Lindholz.

The deputy federal chairwoman of the AfD [Alternative für Deutschland, Alternative for Germany], Beatrix von Storch, had a different approach. The member of the Bundestag commented on her news blog concerning the crime statistics for 2021 that the number of foreign suspects in particular was “disproportionately high”.

Von Storch emphasized the group of immigrants with 12.1% as “particularly massively over-represented” — “measured in terms of their share of the population”. Von Storch also described the proportion of suspected foreigners in the homicides as “particularly high” at 42%.

As far as I can throw up, Faeser continues the annual fairy tale hour, in which the good news is announced that Germany is a very safe country. This should probably calm the population in view of the catastrophic conditions and increase their sense of security.

These are only the registered crimes, the number of unreported cases is likely to be much higher. It’s like the statistics of illegal immigration — only those who are caught are registered.

2 thoughts on “Germany is a Completely Safe Country”

Leave a Reply to Save Europe Cancel reply