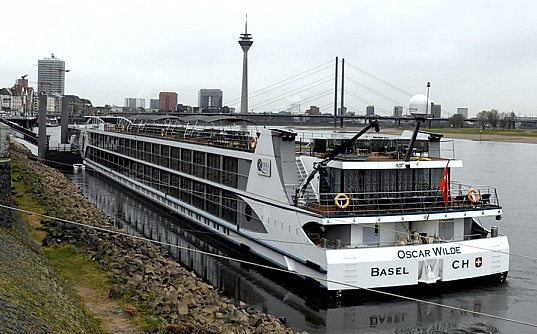 This story is so strange it sounds like a satire: A ship called the Oscar Wilde is anchored in Dusseldorf and is being used as an accommodation for Ukrainian refugees. While on the ship, an 18-year-old Ukrainian woman was raped by two “Ukrainians” from Nigeria and Iraq.

Many thanks to Gary Fouse for translating this article from the German tabloid Bild:

Berlin/Dusseldorf — This crime makes one angry and shocked: In a Dusseldorf refugee accommodation, a young woman was raped! According to Bild‘s information, it involves an 18-year-old Ukrainian woman as victim.

According to information received by Bild, the crime occurred on March 6: On the hotel ship Oscar Wilde, which is currently serving as housing for refugees from Ukraine, an 18-year-old Ukrainian woman was reportedly the victim of a sexual attack. She was reportedly abused by two men, one after the other, from Iraq and Nigeria (37 and 26 years old).

Both reportedly possess Ukrainian citizenship. The police have initiated an investigation into “suspected rape”. Among other things, it must be clarified how the two alleged perpetrators obtained Ukrainian passports.

At the time of the crime, about 25 refugees were reportedly living on the ship alongside paying hotel guests. The accused men are currently in investigative custody. The prosecutor’s office in Dusseldorf confirmed the investigation in response to a Bild inquiry on Monday.

Politicians are shocked and outraged. Union [CDU/CSU] faction leader Andrea Lindholz (51) tells Bild: “The police authorities must take concrete steps with the control of the accommodation to protect Ukrainian women. The Dusseldorf case obliges us to act immediately.”

The head of the federal police union, Heiko Teggatz, tells Bild: “Politicians should now ensure that such terrible rape cases on the Dusseldorf hotel boat do not happen again. Hard and fast punishment with subsequent deportation is the only language such perpetrators understand.”