In response to my post from last night, our Hungarian correspondent László sends his observations on the war in Ukraine. 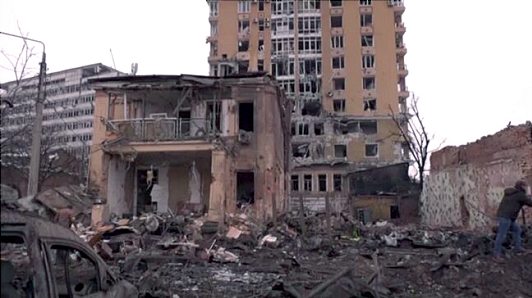 The Fog of Peace and the Clarity of War

An Incomplete View of Ukraine from Hungary

First, please watch this video that allegedly shows apparently bloodthirsty Ukrainian neo-Nazi folks; I will come back to it later:

The weird phenomenon of lacking real and first-hand information about the Slavic world, which the Baron wrote about, is not only an issue in the Anglosphere. Most people in Hungary, including me, do not have much clue about what is really going in Russia or Ukraine either, for a historically long time, to the point that we are actually cut off from these countries in many ways.

It does not mean that we Hungarians do not understand them on a human level when we meet members of their “tribes”; for example, when they come as tourists to Hungary or when we go to their countries. At its base the Russian culture is not alien to us. So whenever I have met Russians or any other kinds of Slavs in my life, I got on very well with them. Kind, friendly people with very similar roots and habits.

Yes, Hungary is a language-island in a predominantly Slavic neigbourhood, but it is not just that. The total silence about the lives of our neigbours in the media during recent decades must have been politically deliberate. And, as a result, today there seems to be a schism between Russia and Ukraine on the one hand and Hungary on the other; and perhaps between Russia and Ukraine and entire “West”. But what is the “West”? Russia is part, and should be part, of the West according to its set of basic values and human and social norms. They are definitely a high civilization that is Christian and organizes itself around the humanistic Golden Rule. Basically the same goes for Ukraine.

But there have been problems with Ukraine: it is, of course, not only about the abuse of the Hungarian minority there; all the other minorities have been persecuted, first and foremost the Russians.

A recent story: the Ukrainian ambassador to Hungary, reportedly crying, expressed herself in a way that outraged many Hungarians. Index, a leftist Hungarian media outlet, is apparently on the side of the ambassador’s Greta Thunberg-like emotional outburst. The ambassador spoke on March 4 in Budapest, at a conference of Political Capital, a shady NGO that is funded by George Soros’ infamous Open Society Foundations:

As part of her understandably emotional, heated monologue, the Ukrainian ambassador also touched on the role of Hungary, and her belief that Hungary does have a chance to mobilise the West [for the cause of Ukraine].

“Strategic calm you will only have in the grave,” said Lyubov Nepop, presumably referring to Prime Minister Viktor Orbán’s statement on public television last Sunday that strategic calm is needed to prevent Hungary from being drawn into the war that is going on in neighbouring Ukraine.

“Do you put the reduction of household energy costs before human lives? […] The anniversary of the 1848 [Hungarian] revolution is coming up and you are talking about cutting the price of electricity? Have you no shame? Do those who put cost-cutting before freedom have the right to celebrate on 15 March? Please, only those who have the courage to stand up for freedom should take to the streets this year!” the ambassador said.

Back to the above neo-Nazi video. It was surprising and enlightening for me, because even though news about the abuse of the Hungarian minority living on the territory of Ukraine has been frequent in the past decade, I did not know the reason for it. Hungarians have been literally harassed, persecuted and handled as second-class citizens. Ukrainian Hungarians who obtained Hungarian citizenship were doxxed and put on a death-list some years ago by a neo-Nazi death squad. They have been denied equal rights, for example the right to use their native Hungarian language in schools and other public institutions; and their leaders have been physically attacked, and threatened and their offices raided by violent paramilitary groups.

So until I came across this video yesterday about a group of — apparently and literally Nazi — Ukrainians, I had no idea how exactly the oppression of the minorities could be taking place there. Do the Nazis have popular support? I had no idea. The video shows that they do, at least some. How widespread this support has been among the population at large I know nothing about. But it is clear that the Nazi authorities could count on at least a minority of Ukrainian neo-Nazis in their persecution of the local Hungarians and others.

However, I am not sure whether this sort of animosity is going on between large groups of average Ukrainian folks and the Hungarian minority — as I just wrote above, I do not have much information. But most people are just good humans, I suppose, over there as well.

I know that many civil communities in Hungary are now helping the fleeing Ukrainians in Hungary in every possible way, with food and shelter. Not only the Hungarian-speaking Ukrainians, but also those who speak only Ukrainian or other local languages are being helped, of course. And there is now an official state programme for saving those people, even housing and employing them in Hungary.

There is no conclusion to this story. Only escalation, I am afraid.

Caveat: Even if I wanted to be objective, I could not be: I do not have enough information — and that is the point. Therefore I could not show the story of the other side: the opinion of the average Ukrainian. It is not only the fog of war; it is also the fog of peace.

But there is something here that I call ‘the clarity of war’: the hitherto hidden and somewhat frozen animosities between nationalities living in the area are coming to the surface as they are being amplified under pressure. Which is most probably also a goal of the Powers That Be with this war. For the Great Fascist Reset to take place, we all have to be divided.