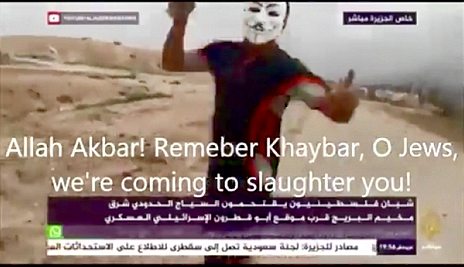 The following Italian article discusses a phenomenon that the media normally shy away from: the increase in Jew-hatred fueled largely the by the growing Muslim population in Western countries.

Many thanks to Gary Fouse for translating this piece from Il Giornale:

The new anti-Semitism and the Islamic elephant in the room

There is much confusion under Heaven about anti-Semitism. Invoked when it doesn’t exist, used as a propaganda club against one’s enemies, for decades it has been going through a transformation that few analyze, but everyone sees. The principal matrix of Jew-phobia is Islamic, and no longer from the extreme Right.

There is much confusion under Heaven about anti-Semitism. Invoked when it doesn’t exist, used as a propaganda club against one’s enemies (the Russians, for example, accusing the Ukrainians of anti-Semitism and neo-Nazism, even if they elected by a wide majority a Jewish president), anti-Semitism is increasing in Western society in an exponential way, especially after two years of a pandemic. Usually, the blame is placed on that which was the most virulent anti-Semite of the 20th century: the Nazi, the fascist, the authoritarian nationalist in its various forms. The root of anti-Semitism is still traced to the 19th century, in the pogroms conducted by Christians, especially Orthodox. And in the centuries of the modern era, to point the finger at the Catholic Church and the Spanish Inquisition. But even if the TV news services, every time they speak of anti-Semitism, by conditioned reflex, are still showing images of swastikas and shaved heads, are we sure that that is still the principal matrix of hate against the Jews?

At least since the years of the war on terror, of which the most acute phase was between 2001 and 2008, the most liberal intellectuals in France, such as Alain Finkielkraut, pointed to a new enemy: anti-Judaism of an Islamist matrix ( known as political Islam) and its numerous connections with the maximalist Left. In the name of anti-racism, above all, is also associated the rhetoric of Islamic anti-Zionism, which automatically translates into anti-Semitism. The target is not only Israel but the Jew as such, wherever he is. The attacks in France of an anti-Semitic matrix, such as the massacre at the Jewish school in Toulouse in 2012 and that of Hyper Catcher in Paris in 2015 (contemporaneous with the massacre of the editors of the satirical newspaper, Charlie Hebdo), are of an Islamic matrix. Also the individual crimes such as the robbery, torture, and murder of Ilan Halimi in 2006, more recently, the murder of Sarah Halimi in 2017 (whose assassin remains unpunished because he was deemed “not prosecutable”), and of Mireille Knoll in 2018, were all committed by common delinquents. Who, however, were also Muslims, were radicalized, and killed their victims explicitly because they were Jews. Mireille Knoll, stabbed and then burned in her house by a neighbor whom she knew, a victim who suffered the passage from one anti-Semitism to another. The old woman, born in 1932, had miraculously escaped the Nazi roundup in 1942. She found death in the following century, at the hand of a young man who adhered to a different totalitarianism.

The most recent person to reveal the existence of this elephant in the room, which is difficult to see and condemn, is Pierre Andre Teguieff, the French sociologist and historian. As a scholar of the New Right, he doesn’t deny at all the neo-Nazi and nationalist matrices of part of the current anti-Semitic galaxy, but in his new essay, Leaving Anti-Semitism?, in his interview published by Le Figaro, he notes what is now the new universal tendency of anti-Semitism: “The great transformation resides in the growing Islamization of Jew-phobia, across the space occupied since the end of the 1960s by the “Palestinian cause” raised to the “universal cause” of the new anti-Jewish imagery now shared by Muslims and non-Muslims. Since the beginning of the 2000s, the murders of French people of the Jewish faith qua Jews are not committed by extremists of the left or right, but by young Muslim men, often delinquents or ex-delinquents, being either jihadists in mission or not — such as Mohammed Merah (the attacker of Toulouse, editor’s note) or Amedy Coulibaly (perpetrator of the taking of hostages at Hyper Cacher, editor’s note).

If Islamism is the principal matrix, this then finds Western shores, the extreme Right or extreme Left. And in both cases, it exploits the common hatred for Israel and Zionism, which is identified in its conspiratorial mythology (common in both extremes) as the beast that dominates the world, through finance, the media, popular art (especially the cinema), and infiltration into government. A hallucinatory vision of reality that marries very well with the religious demonization of the Jew on the part of radical Islamists. Teguieff notes, in fact, that: “From the end of the 1870s to the mid-20th century, militant Jew-phobia embraced the presuppositions of secularization and scientific racism, breaking with the religious anti-Judaism of Christian origin — from which it inherited, nonetheless, the Satanizing vision of the enemy. Then came the vast counter-movement of de-secularization, rediscovering a religious base in a bellicose Islam that we can characterize as a political Islam, which feeds off resentment and a desire for revenge-against the Jews and the ‘crusaders’ — as well as a wish to conquer the world.”

The Anti-Defamation League, which every year, “charts” the spread of anti-Semitic prejudice throughout the world, in 2021, as always in recent decades, has published data that confirm the Islamization of anti-Semitism. 49% of anti-Semites, throughout the world, are of the Muslim faith, compared to 24% for the Christian faith and 21% for atheists (a significant figure in order to understand the trend of the maximalist Left). So almost half of anti-Semitism on the entire planet is of an Islamic matrix. Speaking of geographical areas, the area of the world with the highest concentration of anti-Semites is the greater Middle East (including North Africa) with 74% of survey respondents, which shows that they share the worst prejudices and fears about Jews. It is a unique figure in the world compared to 34% in Eastern Europe, 24% in Western Europe, and 19% in America. The nations from which come the greatest part of Muslim immigrants in France are, by far, among the most anti-Semitic in the world. The ADL, in fact, notes the spread of hostility against the Jews at 87% in Algeria, 86% in Tunisia, 80% in Morocco, and “only” 53% in Senegal.