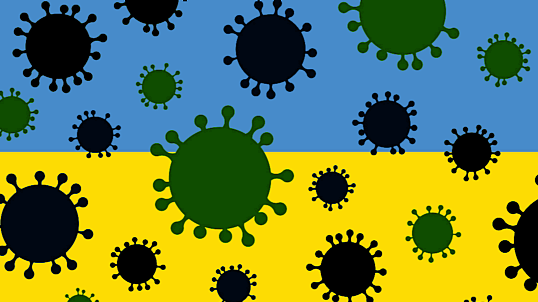 Hellequin GB has translated three German-language articles that illustrate various aspects of the increasingly lethal dystopia we are all now forced to inhabit.

In the clutches of the forced confessional community

Would you like a round of Russian hatred? A society that knows no more shades of gray is bound to be totalitarian.

At the beginning of the pandemic, you were already amazed at how quickly it went. Did you notice it, too? Suddenly Islamist terror was gone. And not just a little bit gone, but completely gone. Probably killed by Corona. Or did ISIS take a short break out of pandemic piety? Well, the media kaleidoscope has just turned again. In the window “safe to hate” appears, like on the turntable of a juke box, after the man with the beard and turban and the Querdenker, now the enemy from the mothball box: “The RUSSIAN”.

With the new image of the enemy, the solidarity industry immediately shifts. The cloak of virtue has changed colour, from a white doctor’s coat to camouflage with yellow and blue merchandising. It’s a bit like Carola Rackete, the sea rescue captain, who quickly retrained in green world rescue. Ukraine cheerleading has already started on Facebook and elsewhere. Nothing against real sympathy and help for war refugees, of course. But the suspicion creeps in that the new Ukraine fans are pretty much the same people who clapped frantically for the nurses on balconies two years ago before kicking them in the back with a mandatory vaccination. Instead of incidence numbers that nobody understands, there are now Ukrainian city names that nobody knows. While a real war rages elsewhere.

After the Corona cancel culture, whose most prominent final victim is the head of a German health insurance company, who warned of the greatly increased side effects of vaccination and then lost his job, it is now the turn of the Russian cancel culture. At the University of Milan, a lecture on Dostoyevsky was recently canceled. In Munich, the conductor Valery Gergiev was fired; Anna Netrebko’s performances are currently being canceled worldwide. Those who don’t distance themselves from Putin quickly enough are defenestrated. The German SPD dutifully removed the Gerhard Schröder coffee mug from their shop. The ex-chancellor has been lobbying for Gazprom for decades.

Does expulsion from the party come next?

The coffee mug with the likeness of Karl Marx, “Have a coffee with Karl”, is, by the way, still available. Yes, there is always something more ridiculous.

Shades of gray no longer fit into the picture

The first casualty of war, some say, is truth. It is neutrality. Anyone who draws the stereotype of war over society only accepts the distinction between friend and foe. Democracy, which always thrives on nuances, shades of gray and alternatives, is being transformed into a forced confessional community in the media. Anyone who has a Facebook profile, please contact their responsible propaganda unit immediately. In such a situation we would need more competence in complexity instead of boastful declarations of certainty. Incidentally, neutrality does not mean indifference or total non-partisanship. Above all, neutrality is the sovereign right to freedom from compulsory confession. Just as it is part of freedom of opinion not to have an opinion or to have to express a specific one.

Stratagem number 6 of the Chinese theory of lists reads: “Make a noise in the east, attack in the west”. The winner for the last two years has clearly been China. No matter what happens: lockdowns, compulsory testing and vaccination, expansion of surveillance methods or now the war in Ukraine. All of this helps China to quietly scale the summit as the new world superpower. While everyone is watching the bloodshed in Ukraine, the West is bleeding itself dry. Inflation is skyrocketing, the middle class is going to the dogs, their own identity is blurring, Western values only count in the right camp.

The war has long been in people’s minds and hearts; it’s raging among us, globally and under the guise of fighting the pandemic. It is a war against the citizens of the West which officially must not exist. How convenient that there is now a real, visible war that distracts from exactly that.

All that’s really missing now is an extremely contagious Russian mutant variant, which is born as a result of a cyber-attack and is spread around the world through Russian gas and Russian vodka.

#2: Where has the harshness of the law been for the past seven years?

From the news portal T-Online:

Federal Interior Minister Nancy Faeser wants to protect Ukrainian women with a high police presence at train stations from human traffickers and sex offenders. “Anyone who tries to take advantage of the plight of the refugees should know: We react to such acts with all the severity of the law,” said the SPD politician to Bild am Sonntag. Nobody should abuse the suffering of the refugees. “Such abuse is deeply despicable.”

There is therefore a massive police presence at the train stations, in uniform and in civilian clothes, according to Faeser. “Everyone is sensitized to report any threat immediately and to intervene.” The Federal Police have long been warning of dubious or criminal offers to women refugees from Ukraine who arrive at Berlin Central Station.

In the past two weeks, there have been repeated cases of men making dubious offers of housing or accommodation to Ukrainian women upon their arrival in Berlin. The federal police checked suspects and banned them from staying in the station. It was due to the suspicion of sexual exploitation, forced prostitution or human trafficking.

According to the police, the warnings have now had an effect. The impression was that such perpetrators who behaved conspicuously hardly ever came to the station, said a spokeswoman for the federal police last Wednesday. Overall, there have been a number of such cases in the lower double-digit range in the past two weeks.

Then they don’t wait at or in front of the train stations, but, for example, in front of the asylum accommodations or shadow the queues at the money issue/application offices.

Perhaps it would have made sense to inform Ukrainian women before their arrival that there has been a loss of control in the colorful republic since 2015, that hordes of mainly young men from predominantly Islamic and African countries have poured into the country and that there are also criminals among them who act as pimps or human traffickers, among other things. On top of that, human traffickers travel in and out of the open internal borders uncontrolled. Welcome to the pleasures of multiculturalism.

On a separate note: where has the harshness of the law been for the past seven years? one might ask. Simple: there’s NO protection for native Germans. And the political mantra has been and still is: German (female) lives don’t matter.

Artificial intelligence designs 40,000 poisons that are deadly to humans

The software needed just six hours for its “research”. The goal of the scientists at Collaborations Pharmaceuticals was to invent as many new molecules as possible that would have a lethal effect on humans.

The work was created as part of the Spiez Convergence conference, which deals with the Biological Weapons Convention. Some of the poisons thus invented are more potent than the deadliest known chemical warfare agent.

Substance VX (O-ethyl-S-2-diisopropylaminoethylmethylphosphonothiolate) is the most common member of the V class of chemical warfare agents. It is a colorless to yellowish liquid that smells like rotten fish. The poison enters the body through the skin, eyes and respiratory tract, initially causing coughing and nausea. It then paralyzes the respiratory muscles and leads to death within minutes with severe cramps and pain. The LD50* for an average adult is around 1 mg for respiratory absorption (via the respiratory tract), or 10 mg for absorption through the skin.

Similar to VX were a number of the “inventions” that were made within just six hours by the “Artificial Intelligence” used. The pharmaceutical company otherwise uses its AI to create active ingredients that have as few toxic effects as possible. On the basis of the available knowledge, new molecules are modeled and automatically examined and evaluated for their potential toxicity. The lead scientist Fabio Urbina explained that the hit rate of these assessments would be very high.

Maximum toxicity was researched instead of minimum

The suggestion to reprogram the AI for sinister purposes came from the organizers of the Convergence Conference, a conference taking place in Switzerland that discusses the implications of new developments for the Chemical and Biological Weapons Convention. The idea was to use a system designed to avoid any toxicity of active ingredients to achieve maximum toxicity. Not much had to be changed in the program for this — the results were comprehensive. A number of results may even have led to substances that are far more toxic than the VX described above and deadly in even smaller amounts.

The scientists want to see the experiment as a “wake-up call”. With experience in toxicology and chemistry one could produce some of these substances. It wouldn’t be that difficult to make some of these molecules — with the right expertise, a weekend of work would get you pretty far. The discoveries were published in the journal “Nature Machine Intelligence” , but kindly without concrete and comprehensible instructions for manufacturing these toxins.

For me, the concern was just how easy it was to do. A lot of the things we used are out there for free. You can go and download a toxicity dataset from anywhere. If you have somebody who knows how to code in Python and has some machine learning capabilities, then in probably a good weekend of work, they could build something like this generative model driven by toxic datasets. So that was the thing that got us really thinking about putting this paper out there; it was such a low barrier of entry for this type of misuse.

We can easily erase the thousands of molecules we created, but we cannot delete the knowledge of how to recreate them.

New poisons could easily be ordered from synthesis labs

The production could also be very simple and would not even have to take place in dark cellars. The researcher explains that new molecules can be produced by many different companies. Care is taken there not to produce anything that meets the known criteria for chemical warfare agents or poisons — but that only applies to known substances. With completely new, unknown toxins, such as those conceived by the AI, it would be possible for a laboratory specializing in the synthesis of molecules to simply produce them and send them in the mail, no questions asked. There are numerous companies around the world that would be able to do this.

If you now consider how many biological and biological weapons laboratories the USA alone operates — many of them abroad because of the “more favorable” legal situation there, one can roughly guess the danger humanity is in. Because the principle also applies: Everything that is possible will eventually happen at some point. And it would be naïve to assume that such research is not already underway there. According to the publication of this study, it definitely is.

8 thoughts on “Dispatches from the Killing Fields”