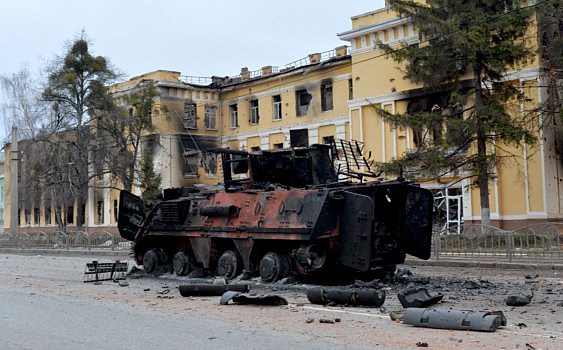 Over the last two weeks our Polish correspondent Green Infidel has been posting thoughtful and reasonable comments about the Russo-Ukrainian war. I agree with much of what he says, but he made one comment last night that I must take exception to:

No-one “manoeuvred” Russia into doing it. The whole world was hoping it wouldn’t happen… The decision was only Vladimir Putin’s.

The last part is exactly correct: Russian President Vladimir Putin made the decision to invade Ukraine, and is responsible for the consequences. He was the aggressor: he ordered unilateral military action against a sovereign state.

However, it’s not true that “[t]he whole world was hoping it wouldn’t happen”. There is overwhelming evidence that what I call the Powers That Be were determined that there would be a war between Russia and Ukraine. From the leaked phone call by Victoria Nuland in 2014 through the machinations of Lindsey Graham to the current conniving of Secretary of State Antony Blinken, it is quite clear that the American subset of the Powers That Be was pushing to foment trouble with Russia over Ukraine.

Back in the 1990s the United States promised Russia, in writing, that NATO would not be expanded eastwards. That promise was never honored, and when the machinations concerning Ukraine began, Vladimir Putin made it clear that he would never accept Ukraine’s joining NATO, and would use any means necessary to make sure it never happened. He considered Ukrainian membership a threat to Russia’s security. You can agree or disagree with that assertion, but that was Russia’s position, and the Russian president stated it quite clearly.

Fast-forward to 2021. The United States continued to talk about NATO membership for Ukraine. In December “Joe Biden assured Ukrainian President Volodymyr Zelenskiy that Kyiv’s bid to join the NATO military alliance was in its own hands.”

However, it’s not at all clear that the European branch of the Powers That Be was at all keen on a war with Russia. It’s possible that the UK might go along with the idea, but the Continent is a different matter. And the further east you go in the Continent, the less keen they are about poking the Russian bear with a big stick.

During a visit to Moldova few days ago, Secretary of State Antony Blinken offered up Poland as a conduit for NATO fighter planes to Ukraine. This reckless decision was taken unilaterally, without consulting either the Polish government or the Pentagon. Poland handled the matter adroitly, offering to deliver its MiGs to the US military, which could then hand them over to Ukraine if it so desired. But the Pentagon declined to do so, correctly pointing out that this was tantamount to an act of war against Russia. Evidently the military brass are not quite as foolhardy as the stripy-pants set at State (and by extension, the CIA).

Unfortunately, the media have been beating the drums of war for so long that there is now substantial public support for doing whatever is necessary to “save Ukraine”, whether it means a no-fly zone over the country or American boots on the ground. Sober, well-informed discussion has been set aside — as our good friend Commander Salamander says, “The Blob wants a war.”

Why would anyone in the USA think it was a good idea to start a war with Russia? The Pentagon is clearly reluctant to go toe-to-toe with the Russian military. Based on what I’ve read (and I’m not at all an expert), the Russians not only have thousands of nuclear weapons, they also have hypersonic missiles that can evade US state-of-the-art missile defense. This means they could sink one or more of our gazillion-dollar aircraft carriers without even using a nuclear warhead. And if they did decide to go nuclear, they could take out the power grid in a substantial portion of the country with an EMP, while vaporizing a city or two if they felt like it.

No wonder the military brass is not too enthusiastic about declaring a no-fly zone over Ukraine.

But somebody wants this war. Who might it be?

There are various factions of the Powers That Be, and not all of them are always in agreement. There’s a George Soros faction, and a John Brennan faction, and a Klaus Schwab faction, and a Hillary Clinton faction, just to name a few. They don’t all want exactly the same thing, and they may disagree among themselves about the best strategy for realizing their common interests.

The first question is: Cui bono?

Among the usual suspects is obviously the Military-Industrial Complex — Raytheon, Boeing, etc. — which stands to make out like a bandit if Russia starts destroying America’s military assets. All those assets will have to be replaced, and then some. Happy days are here again!

Some of the other players must be calculating that they will come out on top after all the strife and carnage is done. Someone will have to rule over the ruins, and they must be expecting that they will be the ones. They evidently think they can come through intact, with themselves in charge. It seems kind of iffy to me, but maybe I just don’t understand the evil genius of their plan.

I’m not so sure they can pull it off. To remain unscathed, they will have to be protected by well-paid mercenaries. After the currency collapses — which also appears to be part of the plan; de-dollarization has already begun — what will they pay the mercenaries with? Gold and silver? If so, how long till the mercenaries notice that they can just take all that gold and silver for themselves? After all, they’ll be the ones with the weapons and training — at that point, why should they obey the orders of the likes of Klaus Schwab and George Soros and Bill Gates?

The Brave New World will be a world of ruthless thugs and warlords. Somehow, I can’t see Bill Gates and Jeff Bezos as warlords.

But that’s just me. I’m not as smart as those NWO dudes. They probably know what they’re doing.

There are other theories out there about why someone might want to foment a war between the USA and Russia. Depopulation. The destruction of the dollar. The hastening of the End Times, etc., etc.

However, as far as I know, there is no hard evidence for what the motive is, nor any paper trail about how the movers and shakers have conspired to make it happen. Yes, we know that the State Department and the CIA have been hip-deep in the Ukrainian mess since the early 21st century. And we know that they engineered the set-up of bioweapons labs in the country — Wuhan West, overseen by Dr. Antony Fauchenko, no doubt — which they are now urgently trying to keep out of Russian hands.

But we don’t have any specific, documented details of why this is being done, and who ordered it.

At least I don’t. I haven’t come across anything in my reading that identifies the culprits and provides documentation for what they have done and why they are doing it. But I’m an amateur; if any experts have access to better information, you are welcome to leave it in the comments.

It’s about the fact that someone — or more accurately, a fairly large group of someones — desires a war between the West and Russia. Somebody wants it to happen, despite the possibility of an apocalyptic outcome.

I’m looking for hard evidence, and not just speculation and assertion.

Who wants this war, and why?