An Interview With Vlad Tepes

Vlad lives in Ottawa, so he has been at the epicenter of the Freedom Convoy action from the moment the trucks began rolling onto Parliament Hill a week ago. He has been down there every day, mingling with the protesters in the bitter cold.

I sent the following questions to him last night, and his answers are below. 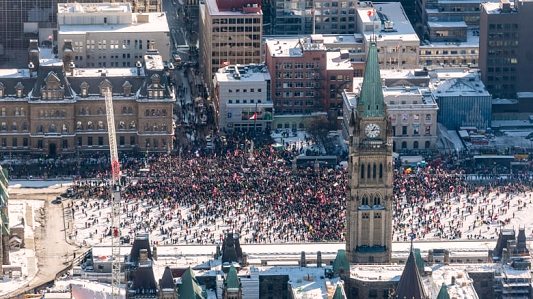 The news media are filtering out anything that reflects positively on the Freedom Convoy. Some news reports say the number of protesters on Parliament Hill has dwindled, and is down to 200 or so. Is that accurate?

It isn’t really like that. The first weekend, which was the 30th and 31st, had not that many trucks but a crazy huge number of people. Tens of thousands for sure. Maybe over 100,000 people. There would have been way more trucks, but every device they could think of was used to prevent trucks from getting to Ottawa and downtown. Many more than are in Ottawa are still held up on old roads and farms. But I was there today at Parliament, and there were three times as many trucks as when the protest started. There were a few hundred people, but it was a Wednesday afternoon. I am told that this coming weekend should see a record number of protestors. More even than last weekend. Keep in mind it was below zero F on Saturday, and there was still an insanely large crowd.

And how about the number of trucks? Are the streets still blockaded in Ottawa?

More so now than last weekend. At night you can hear the horns over large parts of the city. I quite like it; it’s like a symphony for freedom. The actual sound is like old trains in the distance.

If Pierre Poilievre is selected by the caucus to be interim leader of the Conservatives, do you think he’ll bring a vote of confidence against Justin Trudeau’s government?

[Note: After I sent these questions to Vlad, Candice Bergen was selected as the interim leader of the CPC. I don’t know anything about her.]

First of all, he is by far the most competent person in the party. He needs to be picked as the leader, period. People who want to know what he is about should scan his Twitter feed. He is the only elected federal politician to ask real questions about real issues. As a result, he was removed from shadow finance because he was way more popular than O’Toole. Secondly, the Liberals are in government because they are supported by the NDP, who have a Sikh leader who doesn’t really give a damn. It is believed that his concerns are more about Indian politics. But he is very far left-wing. So he would enjoy the perks both ideologically and personally that keeping Trudeau in power brings. A non-confidence vote would have to mean an election followed by a majority Conservative government with Pierre at the helm. This is conceivable, especially if Maxime Bernier throws his support to Pierre.

If so, do you thing Trudeau will survive it?

The question behind the question is: How much integrity is there in the Canadian voting system. A news story broke today that hundreds of thousands of mail-in ballots were not counted. So probably yes, he could survive it. 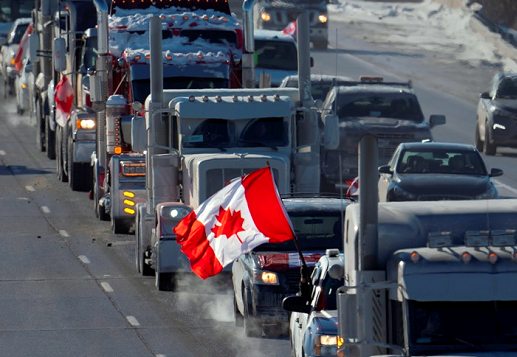 Are any soldiers in evidence, or is it just police?

I have been getting phone calls on that. Apparently military personnel and gear are being moved into Parliament at night. Some think this is OK, though. As in all situations like this, where the military comes down will decide the outcome of the government. This happened twice in a row in Egypt recently, as you and your readers well know. So again, the question is: Does Trudeau have enough confidence in the military’s loyalty to him? I would guess he doesn’t, after he fired one of the top brass for exposing his plot to have the military use its new propaganda unit against the Canadian public. I believe it was to get everyone to take the mRNA shots.

There are reports that the GoFundMe account set up to support the truckers has been suspended, and is “under review”. Can you confirm that?

That information changes twice a day. At one point it was clarified that the GoFundMe people were releasing the funds as accounting was being done. But I also have seen tweets where city officials are asking GFM to seize the money. I can’t find that tweet right now, but it’s out there. A video of Ottawa City Councillors talking about misdirecting the fund, which is over $10M now.

There are some claims that the truckers blocking streets in Ottawa have enough supplies to stay in place for six months or more. Does that sound realistic to you?

There have only been three arrests so far, and just thirteen “investigations” are said to be open. Do you see any clear signs of an imminent crackdown?

The people behind the scenes on both sides are more tactical than we may think. The various government officials were well-prepared with tactics and tricks that would interfere with the protests without angering their supporters too much. For example, overturning a fuel truck on the 417, delaying entry of one of the convoys for hours. This was clearly planned, because that’s the only kind of truck you can’t just tow out of the way. So what I SEE is police very politely seeming to cooperate. It’s not certain whether behind the scenes something is being planned to deal with the protesters unfairly and make it look like it was not an unfair move against them. In essence, both sides are playing to appear to be the victim to garner the support of the undecided 40% of the population, in my estimation.

A smaller convoy has blocked the border crossing at Coutts between Alberta and Montana. Is that gaining much attention in Ontario and farther east?

Rebel Media seem to be the only people covering it. Canada is not a free country. Large media such as Global, CTV and CBC are fully controlled enemy propaganda. What amazes me is how many Canadians understand this now. I did a series of interviews of random protestors last weekend and they clearly knew how the media work, and that is great news. But the media still set the narrative, or more importantly, can choose what not to report on at all. So its anyone’s guess. I get all my news on that from the various Rebel reporters’ Twitter feeds.

Do Canadians seem to be aware of the massive support that the Freedom Convoy is getting from people in other countries?

To a degree, yes. We know that it has inspired similar actions in other countries. But again, we don’t get news they don’t want us to see, even on Facebook, without some difficulty.

What would be your message to non-Canadians about what is happening in your country?

Canada has been usurped by a Maoist. I will offer three links that cement that fact. The most important thing people can do is to help others understand when their leaders are operating under a hidden agenda like Trudeau, Merkel, Biden, and many more connected to the WEF are doing, so that they can recognize the real meaning behind policies. From what I have seen at these protests, a stunning number of people actually get what is going on. To be clear, this is a counter-revolution. We want Canada back as it was before Trudeau. Ideally before even Trudeau’s father. Reagan said freedom is always just one generation away from being lost. This is true. I want people to know that it must be recognized when it is being taken away, and that you must be willing to fight to get it back, or preserve it if you still have it.

All of those are important.

3 thoughts on ““Canada Has Been Usurped by a Maoist””