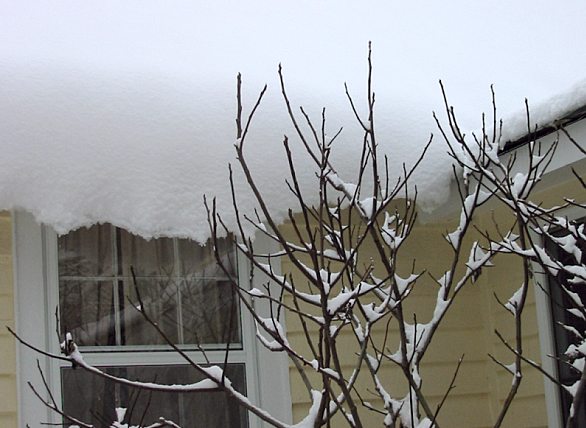 Update #2 3:15pm EST: The snow has changed to rain, which is ominous, because it’s still so cold. The wind is blowing harder now, but not alarmingly so. I’ve filled the bathtub and all the big pans with water. All I can do now is wait and see what happens.

If this is all the snow we’re going to get (about 4″ = 10 cm), I may not have any trouble getting out of here, depending on where the trees fall down.

Update 1:20pm EST: Snow is coming down hard now, but there isn’t much on the ground yet, maybe two inches or so. The temperature is below freezing. There is only a light breeze, and no freezing rain so far. All is well for now.

Another blizzard is scheduled for Central Virginia later today. After what happened last time, I decided to get my post up well ahead of time, so that readers will know what’s up if the lights go dark again.

According to the forecast we can expect 7″ (18cm) of snow. It won’t be wet snow this time — the temperature is predicted to remain at or below freezing while the climate change is coming down. However, as of the last time I checked the timeline chart, there is an ominous period late in the day when the snow changes to rain. If it weren’t for that, I would be fairly confident that the lights will remain on. But with freezing rain in the mix, who can tell?

I’d like to think that all the pine trees that were going to fall came down two weeks ago, and that they’re aren’t any left. However, I’ve learned from decades of hard experience that there’s always another pine tree. I never noticed that tree before, and now it’s horizontal, blocking the driveway…

I expect to wake up later this morning to find the ground covered in white, and be able to cook my breakfast, get online, and otherwise engage in normal activities, at least for a while. But we’ll see.

5 thoughts on “Once More With Feeling”