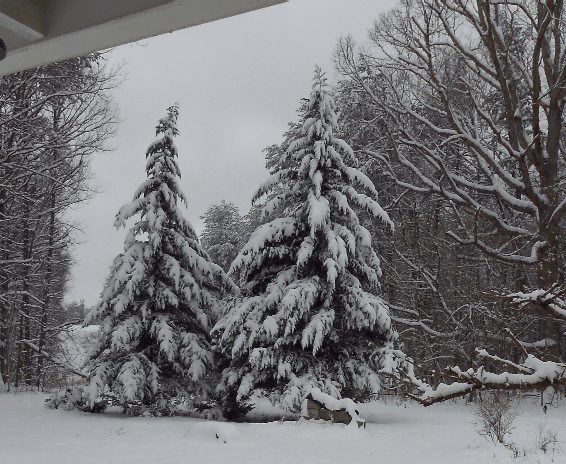 I’ve had my share of winter now, and then some.

Up until Monday the weather had been quite mild, and almost spring-like in the past week or ten days. There hadn’t been a flake of snow. On Sunday it was 70°F (21°C) here at Schloss Bodissey.

All that changed late Sunday night and early Monday morning. The temperature had dropped steadily during the night, and the rain changed to snow. When I got up at 8:00 in the morning, there were near-blizzard conditions outside the window. The snow looked like it was wet, and the wind was whipping the pine trees back and forth. The lights flickered a couple of times, then came back on.

After I ate breakfast, I turned the computer on and was about to post a message about a possible outage. Unfortunately, as soon as the machine booted up the lights went off again, and stayed off. The computer is on a UPS, which gave me enough time to close everything and shut it down properly.

And it kept snowing hard. In the afternoon, when it finally quit, I went outside and measured it: 10.5 inches (27cm). So I was snowed in, and without power.

Two modest-sized trees had fallen in the yard. I could see one small tree (a dogwood, as I discovered later) canted over across the driveway a little ways down. Not too bad — I could deal with that one. It wasn’t until the next day (Tuesday), when I walked down the driveway, that I discovered that the way was completely blocked by fallen pine trees, some of them quite large. I don’t have a chainsaw, so I was stuck here until I could round up some help.

The phone was still working on Monday evening. I called one of my stepsons in Richmond to let him know the situation. The next morning, when I picked up the phone, the line was completely dead. So I was without electricity, without a phone, and had no way to get out.

I walked down the driveway — detouring through the woods at one point to avoid a deadfall of little pine trees — to the main road to talk to one of my neighbors. Her electricity and phone were out, too. The poor woman lives in a double-wide with no non-electric heat. Fortunately, she has kin just down the road, and said she could stay with them if it got too bad. I was relieved to hear that, since she’s in her eighties, and there was no way I could have got her back through the woods to get warm in my house.

I was somewhat better off here, because I have Dymphna’s gas cooking stove. She bought it more than ten years ago after we went through several ordeals like this one, and she made sure to get one with no electronics — it doesn’t even have an electric connection. When the power goes out, it works just fine.

I devised a system where I kept three large cooking pots filled with melting snow on the range, set on low heat. That provided nice radiant heat in the kitchen. I was able to keep the room at 64°F (18°C) during the day, but it went down to 57° (14°C) at night. In the bedroom it was somewhat colder — about 56° during the day and maybe 52° (11°C) at night. I put the heavy comforter on the bed. It was chilly, but not unbearable.

I was able to fix myself hot meals, and had tea to drink. I spent a lot of my time during the daylight hours collecting snow in different pans to replenish the supply in the pots on the stove. When dusk came I lit four or five candles in different places, and used a little flashlight to get around.

So that’s how I dealt with situation until today. It was an ordeal, but bearable. The hardest part was the long night — about fourteen hours without meaningful daylight. The condition of my eyes renders me unable to read by flashlight or candlelight, so there was nothing for me to do except tend the heater pans on the stove. It was intensely boring. I slept a lot, but there are only so many hours you can sleep. I spent long hours lying awake in the bed under that comforter.

Just after midnight this morning I was awakened by a banging on the front door. It was my stepson, who had driven all the way from Richmond to check on me — he was worried because he’d been trying to call me, and got no answer. He drove down the driveway as far as he could get, then followed my footprints through the woods around the deadfall, and walked all the way down here. I was totally surprised and gratified that he was looking out for me. But there was nothing he could do to help — if I were to go back with him to Richmond to stay at his house, I would have had to turn off the heater pans, and the water pipes under the house would have frozen. So I had to stay here. He walked back to his car and drove all the way back to Richmond.

This morning I woke up to more of the same. I’d heard from my neighbor that the power company was estimating that our electricity would be restored by Friday — which might have been over-optimistic. I braced myself for a long siege.

At noon I walked down the road about a half a mile to consult with another one of my neighbors, who has a chainsaw and a tractor. He agreed to help me. We worked together clearing out the fallen trees. The chainsaw was indispensable, but the tractor did most of the work. He’d make just enough cuts so that he could move the debris out of the way with the bucket on the front of the tractor. The deadfall was the worst part — it was in a narrow, tight, heavily wooded section, and took a long time to clear.

But it got done — I am officially able to get out, and will do so tomorrow.

When I got back to the house I was amazed to see the lights in the living room back on — the power had come back on a couple of hours previously. The house was already starting to warm up. What a relief!

And the phone was back on, too. My theory is that a major switching box shut down after having its electricity supply cut off for so long. With the phone came the Internet, so here I am, able to tell my story about the Great Blizzard of ’22.

Being out of action for so long has left me a real backlog. I haven’t even looked at my email yet — I dread to think how much of it there will be. And I have a lot to do here in the house to clear up the filth and detritus of three days without power. I’m running a load in the dishwasher right now. And some of the meat in the freezer has gone soft enough that I’ll have to deal with it. I have a package of pork chops out — they’re the most sensitive, so I’ll cook them tonight.

I’ll keep approving comments, and do my best to put out a news feed before midnight. Bear with me; I should be back on an even keel within a couple of days.