The Netherlands’ long national nightmare is over at last, at least until the next election — which may be quite soon. H. Numan has the report. 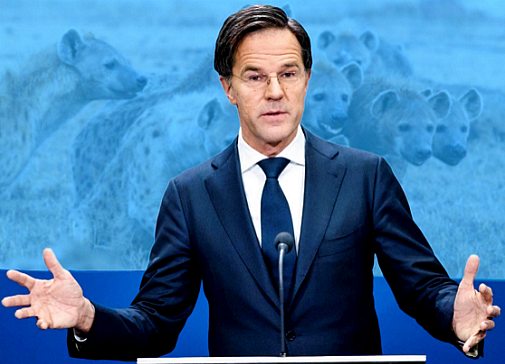 We finally got a ‘new’ cabinet, after the longest negotiations in Dutch history. That cabinet is what I more or less expected. A left wing monstrosity thinly disguised as a ‘liberal’ VVD (conservative) cabinet. It isn’t a new cabinet at all, as it is the continuation of the previous one. Only with new faces. Rest assured, it won’t last.

You may wonder why it takes the Dutch and Belgians ages to form a new cabinet. The Germans had more or less the same unworkable electoral results, and slapped a cabinet together in three months. In Germany they have a electoral threshold. Any party not meeting the 5% threshold is out. Except… for minority parties. Who on earth would have foreseen that? Allah surely provides!

In Belgium it’s different. They have at least two of everything, including the king. Yes, Belgium currently has two kings: the one who had to abdicate and the present one. King Philippe, or Flippie as he is colloquially known by the Flemish. Two of everything means anything that can be bilingual, is. There are two socialist parties, a Flemish and a Walloon version. Two Christian Democrat parties, two conservative parties, two labor unions, and so on. Not to mention semi-separatist parties, for both Wallonia and Flanders. Those parties have to form a coalition in no less than three parliaments: the national parliament as well as the Flemish and Walloon parliaments. Paint dries a lot faster than that.

In Holland it is again different. We have one language, no threshold, but way too many parties. Currently nineteen parties are represented in parliament. The formerly big parties are still shrinking (VVD) or almost dead (CDA, PvdA). The minimum for a big party in the past was over 25-30 seats. Right now only one party has 31 seats: the VVD. Everyone else considerably less. That means you need a lot of parties to form a cabinet. And that means very lengthy negotiations. The math is very simple. There are 150 seats in parliament. You need at least 76 for a majority. The VVD holds 31 seats, that means everybody else combined has to supply the remaining 45 seats.

This election was Rutte’s last one. There is no rule limiting him. He can, if he wants, run again and again. But that would be as Dear Leader. Highly unlikely to happen, unless he wants to run the risk of being eaten. Yes, that really happened in the past. An, at that time, much hated (and probably the best we ever had) PM was lynched and lunched, in 1672. His name was Johan de Witt.

We’ve had quite a few PMs who ruled three cabinets. But none who successfully managed four. Rutte wants it! My Preciousss! In order to maintain his position he gave away just about everything. I have to be honest: the electoral results were very difficult to work with. The VVD (conservatives) won, by losing a little. The dropped from 34 to 31 seats but remained the biggest party. The runner up was D66. They have 24 seats, five more than last time.

No real new cabinet could be formed. Impossible. Not enough for a left wing majority, and way too many parties for a conservative cabinet. So we got the weird situation that the last coalition basically remained intact. The only difference is that D66 gained more influence, and the conservatives lost some.

Now, picture this: the board of a company fires the entire management team for mismanagement. The team remain as caretakers. As there is an emergency, they have almost unlimited powers to do what they want. A new management team is appointed by the board, which happens to be the old team. I’m not sure if that is even legal!

This is really what happened. Rutte has replaced some of the old discredited faces with fresh ones. Most of the remaining old faces were moved to different positions. Mrs. Al-Qaq (Sigrid Kaag) was moved from foreign affairs to finance. Our beloved clown Hugo de Jonge was saved by his lovely shoes, and slithered from health to housing.

This cabinet will have lots of entirely new faces, and is the biggest in a long time. No less than 20 ministries were created. Both are signs of a cabinet with a short lifespan. For example, the new minister for Justice will be Dilan Yeşilgöz-Zegerius. The press invariably calls her Mrs. Zegerius. Almost never Yesilgöz. She holds a degree, but not in law. She’s the first Justice minister in the history of the country without a law degree.

Franc Weerwind will be the new minister for legal protection. He was born on the Antilles, and has a reputation for being a reverse pied piper. His nickname is Weerkind (weer [een] kind; another child). He doesn’t collect children, he drops them. Everywhere he goes babies pop up (or out) nine months later. Please don’t blame him, he can’t help it. He’s allergic to rubber… Respect the man: marrying or at least acknowledging your offspring would be appropriating western culture. In other words: a disaster and/or scandal in waiting.

Most of the damaged old faces have been replaced. The problem is that the new load has zero experience on the job. Everybody knows Rutte won’t run again. That means one of those freshly minted conservative politicos will become his successor. Which means all of them battle to death to inherit the ring that rules them all.

Mrs. Al-Qaq also presented a new team. Hers is slightly more qualified, but not by much. De jure, Mark Rutte continues as prime minister. De facto, Al-Qaq is that. She made absolutely damned sure D66 got the control posts (finance, defense, climate) and let Mark Rutte manage the trouble posts (infrastructure, justice, elderly, environment, migration).

Who is this Mrs. Al-Qaq? Her Dutch name, and the name she’s always referred by, is Sigrid Kaag. That’s her maiden name. She married without permission of the Dutch government a very high ranking PLO officer. In fact, her husband Anis Al-Qaq, was the PLO minister for foreign affairs. As you know it is quite unlikely a mohammedan will permit a western wife to be or remain Christian. It is utterly unthinkable a top PLO man will do that. Such a dignitary must marry within the faith. Anything else is impossible. We didn’t hear a peep about the marriage in the Middle East, which means Mrs. Kaag is no longer Mrs. Kaag but Mrs. Al-Qaq — and a convert.

The fact that she avoids the topic and pretends different doesn’t mean anything. She is a muslima. Not only that, but she simply sidestepped asking for the required permission. You see, if you are a high ranking officer in the Dutch government you must apply for permission. Of course you can always marry, but that might mean giving up your position due to a conflict of interest. Giving up her marriage or her position isn’t on her agenda. Al-Qaq wasn’t pleased at all having to settle for vice premier, she definitely wants to become the first female premier of The Netherlands. (And consequently the first mohammedan premier.)

As you can see, this cabinet won’t last, because it can’t last. The new faces lack any experience in their jobs, and have to prove themselves. Which means they will blunder. Most of them are placed on ministries with plenty of trouble. For example, the justice ministry had three ministers (and junior ministers) in a row who had to resign. To make matters worse, this minister does not even have a degree in law. It’s not just likely she will have to resign sooner or later. It’s a dead certainty.

How long this cabinet will last, I don’t know. Not long, that’s for sure. I place my bets before Christmas. We’re currently in the beginning of a major crisis, with plenty of woes to choose from. I don’ t have to tell you about covid or inflation. Covid — possibly — will fade away this year, but the damage won’t. It’ll take years, if not decades, to repair it. Inflation is at an all time high since 1980. That might very well lead to hyperinflation. The Euro transfer union (where rich EU countries will have to pay for everything, and the poorer nations collect) will become effective this year. Certainly with the present German cabinet.

Erdogan will probably resign/forced to resign/hang on a lamppost, because of his bungling of the Turkish economy. Putin wants the Ukraine back. Marxists Environmentalists smell victory. (Our new cabinet plans to spend more on the environment than all else combined.)

Worst of all, I don’t see any chances for the better. Rutte found a way to boycott Geert Wilders forever: make sure he has plenty of competition. Right now the PVV and Geert Wilders are more or less left alone. There is no need to vilify them anymore. First a Forum for Democracy popped up, shearing off two seats. In the next elections they snatched five seats. Then they split into two. Another party BBB appeared. All of them fill a niche the old large parties left wide open.

Which is good news for the elites. They don’t have to worry about competition. The previous large parties all merged into an almost identical pro-Europe internationalist elitist party. They still exist, but you can compare it with different brands of butter or soap coming from the same factory.

This election showed democracy is dead. May it rest in peace.

One thought on “Habemus Papam!”