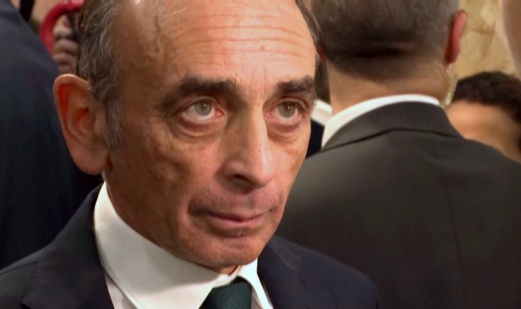 Gates of Vienna is no johnny-come-lately in its coverage of Eric Zemmour. Major media outlets outside of France have just now discovered him, but we’ve been featuring subtitled videos of his TV appearances for more than five years.

Up until recently my tagline for him has been “the popular French commentator Eric Zemmour”, but it will now have to change to “the French presidential candidate Eric Zemmour”. And maybe, if we’re lucky, I may someday get to type the words “French President Eric Zemmour”.

Mr. Zemmour is driving the legacy media bananas. He has named his political party Reconquête — Reconquest. How could he possibly be more offensive? Their standard description of him is “the far-right French television personality Eric Zemmour”. They love to track down all the politically incorrect things he has said and clutch their pearls about his “racism”, especially when he talks about Islam, and says negative things about culture-enrichers. They don’t seem to understand that it is his willingness to say such things forthrightly in public that makes him so wildly popular. Not even Marine Le Pen is willing to push the envelope as far as he does.

In addition to being vilified by the left-wing press (but then, I repeat myself), Mr. Zemmour has been prosecuted and convicted multiple times by the state for his “hate speech”. More recently, he has been physically attacked by antifa-types and “youths”. I hope his campaign has budgeted large amounts of money for bodyguards and security consultants, because he’s going to need all the protection he can get.

The Left is sandbagged in their efforts to thwart Mr. Zemmour by the fact that he is Jewish. Oh, I’m sure they can trot out the usual suspects among liberal Jews to talk about how afraid they are of having a right-wing extremist gain the presidency. But how much credibility will they have when the candidate identifies Muslim immigrants as a threat to France? It is Muslim culture-enrichers who have been committing deadly violence against French Jews, and everybody knows it.

The video below features the opening of Eric Zemmour’s speech in Villepinte, where he launched his campaign in front of 15,000 cheering supporters.

21 thoughts on “Eric Zemmour: The Reconquest of France”