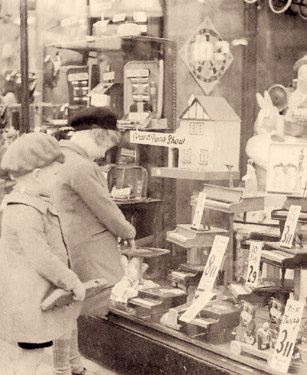 I’ve posted this poem a couple of times in the past, but it’s worth revisiting during this manic materialistic holiday season in which the J- and C-words must never be mentioned:

A Week to Christmas

A week to Christmas, cards of snow and holly,
Gimcracks in the shops,
Wishes and memories wrapped in tissue paper,
Trinkets, gadgets and lollipops
And as if through coloured glasses
We remember the childhood thrill
Waking in the morning to the rustling of paper,
The eiderdown heaped in a hill
Of wogs and dogs and bears and bricks and apples
And the feeling that Christmas Day
Was a coral island in time where we land and eat our lotus
But where we can never stay.

There was a star in the East, the magi in their turbans
Brought their luxury toys
In homage to a child born to capsize their values
And wreck their equipoise.
A smell of hay like peace in the dark stable —
Not peace however but a sword
To cut the Gordian knot of logical self-interest,
The fool-proof golden cord;
For Christ walked in where philosophers tread
But armed with more than folly,
Making the smooth place rough and knocking the heads
Of Church and State together.
In honour of whom we have taken over the pagan
Saturnalia for our annual treat
Letting the belly have its say, ignoring
The spirit while we eat.
And Conscience still goes crying through the desert
With sackcloth round his loins:
A week to Christmas — hark the herald angels
Beg for copper coins.

For my remarks on the poem and the surrounding cultural context, see the post from 2017.

4 thoughts on “A Week to Christmas”