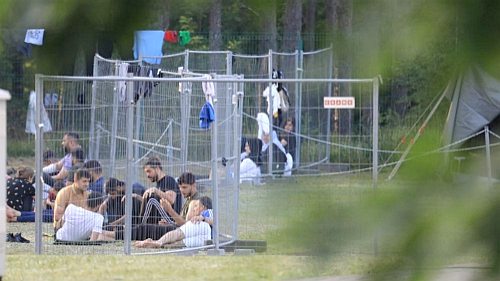 The migrants who have fetched up on the Belarusian side of the border with Poland are finding conditions there far less salubrious than those that obtain in the Club Med facilities set up on the Italian island of Lampedusa. The Belarusian and Polish guards don’t treat their guests with the same tender solicitousness that the migrants experience at the hands of the Guardia di Finanza. And, more importantly, now that winter is coming on, the weather is far harsher in the Belarusian forests than it is in the balmy southern Mediterranean.

As a result, the culture-enrichers are complaining about their lot to reporters for the Western press.

Many thanks to Hellequin GB for translating this article from Der Tagesspiegel:

For days, thousands of migrants have been staying at the Belarusian-Polish border in the cold. People from Iraq talk about beatings, torture and starvation.

Migrants stranded on Poland’s external EU border and returning to Iraq from Belarus report severe abuse. The people were beaten and tortured by Polish and Belarusian police officers, several victims from the Kurdish autonomous regions in Iraq told the German press agency on Saturday.

A 38-year-old from Dohuk said he was ill-treated and later forcibly deported from Belarus. In addition, he and other migrants had neither water nor food. The Iraqi wants to try again to get there, despite his disappointment with the countries of Europe. “We were treated inhumanely,” said a 71-year-old Yezidi woman who, according to her own statements, no longer feels safe in Iraq and therefore wants to visit relatives in Germany. The terrorist militia Islamic State (IS) abducted several of their children. A 41-year-old man from Erbil also said he was tortured by officers from Belarus and Poland. He also says: “The Belarusian authorities have betrayed us.”

For days, thousands of people have been staying at the Belarusian-Polish border in the cold to get into the EU. They wanted to stay until the EU let them in, numerous Iraqis and Syrians told a reporter for the German press agency in the emergency accommodation in a warehouse in Brusgi. The border point there is closed with concrete barriers and barbed wire. In front of the emergency shelter, helpers continued to provide people with food and medical help on Saturday. The hygiene conditions are bad. The civil defense also strengthened fire protection.

The people were able to get everything they needed, said the general secretary of the Belarusian Red Cross, Dmitri Shevtsov to the dpa [German Press Agency] in front of the converted logistics center. According to estimates, around 2,000 people stayed there who refuse to return home and want to go to Germany, Belgium and other EU countries. They are guarded by armed uniformed men and cannot leave the premises.

“We wait until Germany accepts us”

As the ARD reports online, there are toilets, tankers with fresh water and, more recently, trucks on the site in front of the large warehouse, as mobile kiosks and snack bars. In the hall, people lie close together. “You sleep two minutes and for three are you awake,” said the 13-year-old Bahash to the broadcaster. Nevertheless, it is far better here than in the woods, where she and her family had stayed for days — in the hope that they might still make it across the border into the EU. Also because the Belarusian border guards behave very differently towards the refugees here. “They give us food, they give us sleeping bags — everything! They give us blankets. They help us somehow.” Like almost everyone here, Bahash and her family want to go to Germany. They had had asylum there for a number of years, but no permanent residence status. It is her second and final attempt. The offer to fly back to Iraq via Minsk is not an option for them. “We will never go back. We’ll wait until Germany takes us in,” says Bahash.

Belarusian investigators also continued questioning migrants who were injured by the Polish side last Tuesday when using water cannons and tear gas. Children had also been hit. The people were questioned with the help of interpreters. The investigation committee in Belarus speaks of 100 victims.

In an interview with the BBC, the Belarusian ruler Alexander Lukashenko compared the Polish security forces with “fascists”. They also violated the Belarusian state border by using the water cannons and tear gas, he said. Lukashenko claimed that chemicals were used that would otherwise destroy “cockroaches”.

Poland’s Defense Minister Mariusz Blaszczak, on the other hand, accuses Belarus. “Now the migrants and the Belarusian authorities have used a new method. Smaller groups of people are trying to cross the border in many places, “he told RMF FM on Saturday. There is “no question that these attacks are being controlled by the Belarusian authorities.” Polish border guards also reported on Saturday that several small groups tried to cross the border. A few dozen people were involved in each case. However, the security forces also reported a larger group of around 200 people who were armed with tear gas, fireworks and stones.

According to their own statements, the Polish authorities registered a total of 195 illegal attempts to cross the border on Friday. “82 foreigners were asked to leave Polish territory. Two Ukrainian citizens and one German citizen were arrested for aiding and abetting,” said the border guards on Twitter on Saturday. “We have to be prepared for the fact that this problem will continue for months. I have no doubt that it will,” said Blaszczak. Lukashenko told the BBC on Friday that it was “absolutely possible” that Belarusian armed forces may have helped migrants enter the EU, but denied organizing the operation. “We are Slavs. We have a heart. Our troops know that the migrants want to go to Germany. Maybe someone helped them,” he said. “But I didn’t invite them here.”

The European Union accuses Lukashenko, whom it no longer recognizes as president, of bringing migrants from crisis regions to the EU’s external border in an organized manner in order to put pressure on the West. The people from Iraq, Syria and Afghanistan entered Belarus on tourist visas.

3 thoughts on ““We’ll Wait Until Germany Takes Us In””