Early last summer I predicted that a new Corona “variant” would appear around Thanksgiving, prompting a new surge of restrictions, lockdowns, etc., and inevitably another “vaccine”.

The reason for the timing was twofold, at least in the USA. First of all, the new restrictions needed to be postponed until after the gubernatorial and municipal elections, because widespread discontent created by the new anti-COVID measures would disadvantage incumbents in Democrat-held cities.

The second — and more important — reason is that there was a lull in Corona infections over the summer, bit a surge was to be expected in the late fall, just as there was with the seasonal flu before the flu disappeared, as people move indoors for the winter months. Under those circumstances, the increasing number of cases, accompanied by the alarming graphs with rising red lines, can be employed to present gullible viewers with evidence that the dreaded Corona is raging through the population again. Contagion hysteria can be whipped up to accompany the rollout of the new mutation, so that when the new “vaccine” becomes available, people will beg to be jabbed with it.

So everybody gets vaxed, the rules are relaxed, and then this time next year the next variant magically appears, so that the same scam can be repeated indefinitely until the time is ripe for the Great Reset to be unveiled.

At the time the article below was written, the only label for new variant was the cumbersome “Mutant B.1.1.529”. Today, however, the boffins officially christened it “Omicron”, which will roll off the tongue nicely during the coming propaganda push. Omicron is resistant to all existing vaccines, so I presume that obedient citizens will have their “fully vaccinated” status revoked and be placed under onerous restrictions until the new needles are ready for everybody’s arms.

Many thanks to Hellequin GB for translating this article from :
German-language news portal Report24. Note: this was written before travel restrictions began:

Civil defense has known a clear protocol for dangerous epidemics for decades: close travel routes. In the case of the alleged Corona pandemic, this happened neither in the spring of 2020, nor is it happening now, when a terribly dangerous mutation from South Africa is allegedly threatening the world. As mainstream media roared the red alert, planes from South Africa landed all over the world . The media pandemic is apparently going on happily. And the numbers from South Africa are — to put it politely — “strange”.

Personal acquaintances of the author report from South Africa that the virus is virtually non-existent there. Only about 5% of the population has been vaccinated. The self-perception does not quite match the perception of others. According to official data, 23.8 percent of the approximately 60 million South Africans are said to have been vaccinated. In total, around 90,000 deaths from or with Covid-19 have been recorded. To what extent the data can be trusted is unclear, because the country is likely to far surpass even Austria in terms of corruption.

In South Africa, from November 22 to 23, 18,586 new “cases” were suddenly reported in the international systems. Such a rapid increase is unlikely to be right, especially because the numbers were put into perspective on the following days. Quite coincidentally, these shock numbers came at the same time as international reports about a new virus mutant with the provisional name “Mutant B.1.1.529”. Corona crybaby Karl Lauterbach “warns”, the Handelsblatt (member of the George Soros media synchronization club “Project Syndicate”) sees “The World in Fear”. Interestingly, it is always the same players who first scream “fire” and generate drama.

However, despite all the fear and panic, what once again does not happen is the unwinding of the normal civil defense protocols. Closing all travel routes to the affected areas. If it were indeed a dangerous virus, law enforcement agencies would have to take action now. Because that is a deliberate threat to the public. The Handelsblatt explains in a relaxed manner:

Lufthansa is maintaining the flight connections to South Africa for the time being. “We are implementing the requirements and will continue to fly, also to bring people home and transport freight,” said a company spokesman. Lufthansa is closely monitoring the situation and complying with all legal requirements and rules.

Fifteen minutes ago , the news came that the German government wants to at least restrict travel routes. However, only from “Sunday night”. Until then, you can “spread” diligently.

The Federal Ministry of Health announced that the country will be considered a virus variant area from Saturday night. “As a result, airlines are only allowed to carry German citizens to Germany.” In addition, all those who have entered would have to be in quarantine for 14 days — even if they are fully vaccinated.

And although Lauterbach and the system media already know exactly how dangerous the new mutation is, the World Health Organization (WHO) is only now starting its investigations and has not yet published a specific statement on the danger.

An exciting detail is part of the storytelling: “It must be determined whether it makes vaccines ineffective or not,” the Handelsblatt quoted British Transport Minister Grant Shapps as saying. Perhaps B.1.1.529 is also just the excuse that the vaccines no longer have any protective effect worth mentioning and that the hospitals and cemeteries are filling up with “completely” vaccinated people.

The RKI [Robert Koch Institute] provides information on this page about “worrying” virus variants. B.1.1.529 does not even appear there. But that doesn’t matter, because “experts” like Lauterbach certainly know better and, above all, in advance.

Current information on B.1.1.529 from a mainstream perspective can be found on the BBC website. There you can read about numerous mutations which also affect the “spike proteins”. So far it has been explained to the public that these proteins can hardly or not mutate and that the vaccines would therefore be effective for all variants. What is missing when considering the mutant is the unanimous opinion of virology that viruses may become more contagious over time and with many mutations, but become more and more mild.

Unusual accumulation of mutations in variant

The BBC reports on an “unusual accumulation of mutations” in the variant — which will certainly also fuel the so-called “conspiracy theories”. Has another laboratory version been released here? On the other hand, the mainstream is currently again trying very hard to discredit the Wuhan laboratory theory. Numerous reports in the last few days claim an origin in a meat market in Wuhan (bat theory). What the BBC also explains: The new virus variant is said to have already spread across South Africa. However, panic is not (yet) being stirred up there, experts from South Africa explain that nothing is known about whether B.1.1.529 would be more contagious than Delta, for example.

Botswana says the new variant was discovered inside the bodies of fully vaccinated people. 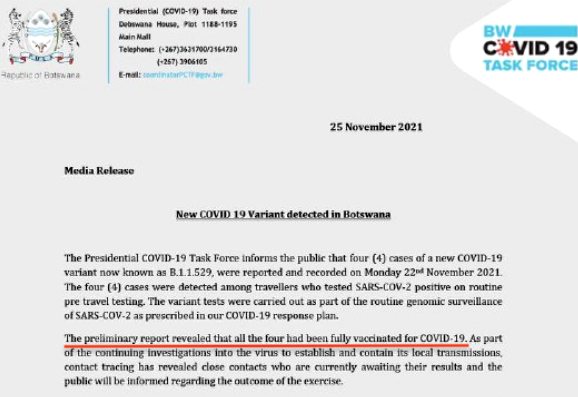 I have to say that corrupt regimes in Africa want to exploit the EU even more, so the alleged Corona infections, deaths and the danger of the mutant are so exaggerated that millions of euros land in the dictators’ foreign accounts. And whoever says that South Africa is a democracy with a flawless democrats also believes that Stalin was a human rights activist.