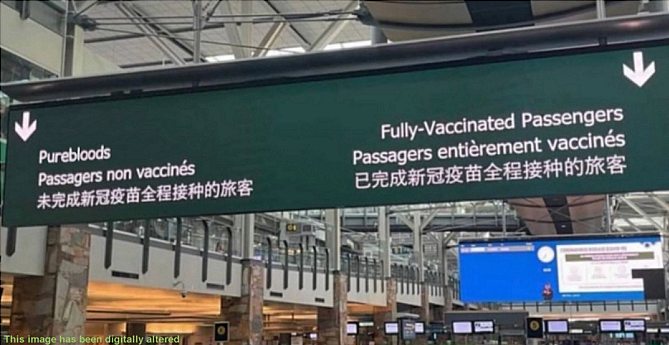 Most readers are aware that unvaxed activists have been trolling the vaxed snowflakes online by referring to those who have not been injected with the experimental mRNA treatment as “Purebloods”. It’s a good tactic, because it takes the conversation to a place the pro-vaxers would be smarter to avoid.

I experienced my first example of Pureblood exclusion, as I mentioned last week, when I found out that I would be unable to attend a performance of Beethoven’s Fifth because I had not been assimilated into the Borg vaccinated. I’m sure many similar experiences await me as we roll into 2022.

To do my small part to subvert the narrative, I have digitally altered a photo of a sign that greets passengers at Vancouver International Airport. From time to time I may do the same when I come across similar signage.

I recommend doing the same sort of thing with actual physical signs in meatspace. One might carry around a set of carefully-lettered cardboard “Pureblood” signs with adhesive pre-applied to the back, and paste them over the word “Unvaccinated” in appropriate places. If enough such guerilla signage appears in prominent locations it might tend to enrage “vaccinated” NPCs who happen to encounter the message.

As our dystopia emerges fully in the next few months, it’s possible that the unvaxed will start wearing buttons or hats with “Pureblood” emblazoned on them to proudly proclaim their dissident status. I’m a severe introvert, so I probably won’t do it myself, but the idea of it makes me smile.

One sobering thought: We Purebloods will always be a minority of the population, and possibly a small one at that. The vast majority of citizens have already taken the jab, for better or worse. Our only consolation is that most of those who remain unvaxed are resolutely Pureblood, so that our numbers will remain more or less the same — at least until the peace officers roust us out of bed at 3am, haul us off to the Health Camps, and force us to comply.

23 thoughts on “The Pureblood Signage Project”