Sexual perversion is one of the most important fronts in the Culture Wars. Fighting on that front seems to be further along in the UK than it is here in the USA, although we’re rapidly catching up. Our English correspondent Seneca III sends this report on one particular advocacy organization involved in the battle. 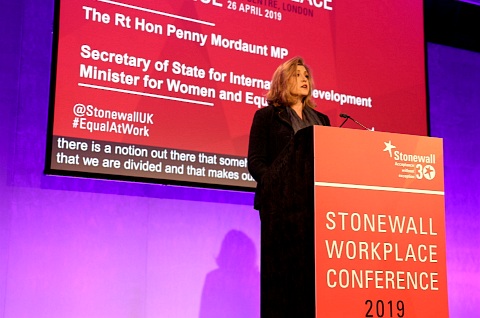 Stonewall is a lesbian, gay, bisexual and transgender (LGBT) rights charity in the United Kingdom.

In 2001, Stonewall launched its Diversity Champions programme, a programme which works with over 900 organisations, including the Cabinet Office, to ensure that lesbian, gay, bisexual, transgender and queer people (the LGBTQ+ community) are comfortable in the workplace. This includes addressing outright discrimination, as well as “more discrete” forms of heterosexist thinking.

[Although to my mind that translates as preferential treatment before and behind the Law for them through Affirmative Action and various other slippery practices at the expense of the majority normal heterosexual community.]

Employers who pay to join the scheme are given a logo to use on promotional materials and are listed on a ‘Proud Employers’ careers site. They gain access to a library of resources and may have their policies reviewed for LGBT inclusivity by Stonewall staff. Members of the scheme are given advice on words and phrases used in their staff support materials, including a preference for gender-neutral language.

They have also managed to manipulate, or frighten, Parliament into introducing, amending or repealing parts of Government Acts as in the shortened list below:

In February of 2005, the Royal Navy joined Stonewall’s Diversity Champions programme. The Royal Air Force and the British Army joined in June 2008. The number of major employers involved in the programme grew from 100 members in 2005 to over 600 in 2010. Organisations now engaged in the programme, collectively employing over four million people, include many UK universities health trusts, banks and financial institutions.

In May of 2021, the Equality and Human Rights Commission (EHRC) announced that it would be withdrawing from the Diversity Champions programme on the grounds that it did not constitute the best value for money. Liz Truss, the Minister for Women and Equalities, suggested that all government departments should withdraw from the scheme.

In November 2021, the BBC also withdrew from the scheme.

Essentially, Stonewall has descended into the bowels of its fertile imagination to create situations and problems which do not exist in the hope that these will provide a raison d’être for the continuation of its pointless existence; and in the interests of its bank accounts, of course which are constantly topped up by a suborned Heritage Industry, political chancers and Corporate virtue signallers, all with their grubby hands deep in charitable monies, the public till or the profits from the affirmative-actioned parts of the commercial sector.

Stonewall, simply put, have become the ultimate fanatics and, given enough rope, fanatics will inevitably end up hanging themselves. They always reach a point where they become overwhelmed by their power and leverage and overegg the omelette to a point where their activities become publicly visible, risible and offensive to all and sundry.

So, let us hope, then, that the real Tory Party find some vertebrae, bite the bullet and shuffle the wifelet’s Poodle off stage into the political wilderness together with his perambulating matrimonial impedimenta and entourage (and hopefully that outrageously priced ghastly wallpaper and déclassé furniture as well), although I do hope they leave the mouser behind, as it is apparent that Larry the 10 Downing Street cat is the only one in there with integrity and serving a useful purpose.

— Seneca III, this sixteenth day of November in the year of our Lord 2021.