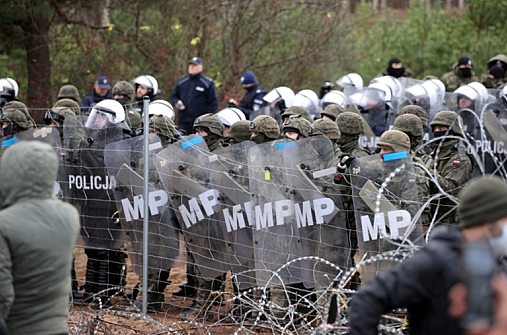 The latest migration crisis in Europe is focused on the border between Belarus and Poland. Belarus, under President Alexander Lukashenko, has enabled a flood of “refugees” from the Middle East to his country and then helped them swarm the border with Poland. The culture-enrichers are, of course, using Poland as a means of transiting to Germany, which is their intended destination.

Below are two clips concerning Poland and the migration crisis. The first is a crude propaganda video from Belarusian state TV that demonizes the Poles in a way that has not been in fashion in the West since before 1945.

Green Infidel, who translated the video from the Polish subtitles, includes this explanatory note:

The clip is from a regular show by Grigoriy Azarenok, a well-known propagandist on Belarus state TV. Previously, he was notorious for describing oppositionists in Belarus in dehumanising terms, such as: “vile reptiles”, “abominations of the human race”, “inhuman”, “parasites and idlers”, “macaques”, “rats”, “jellyfish” and “corpse-looking witches”.

28 thoughts on “Poland in the Spotlight”