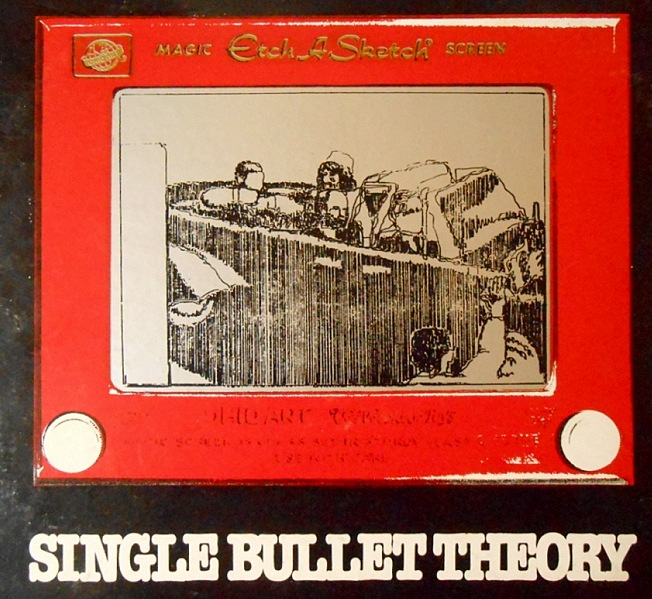 Today is the fifty-eighth anniversary of the assassination of President John F. Kennedy. I don’t expect much attention to be paid to the occasion; the fiftieth in 2013 was probably the last big fling of the Camelot industry. With the Boomers currently wheezing their way under the sod, the date is passing out of popular recollection and into history.

The image at the top of this post shows the cover of the album “Single Bullet Theory”, by a band of the same name. It’s actually an EP — containing only four songs — rather than a full LP. The cover was too big to put in my scanner, so I had to take a photo of it.

SBT was relatively local to me, in the Richmond area. One member was a friend of a friend, so I actually knew the band a little bit. I heard them play once or twice in the late 1970s.

The image on the album cover was created when irony was just becoming ascendant, so in 1978 it was about as cool and hip as it could get. And at the time it appeared, it would have been instantly recognizable to virtually any American adult.

The original photo — one frame of the 8mm Zapruder film taken in Dealey Plaza on November 22, 1963 — was iconic. Everyone had seen it. Fifteen years after the assassination, the context of that photo was still totally familiar. It even made its way into an Elvis Costello song from the same period, “Less Than Zero” (especially the “Dallas version”). Everyone knew what the singer meant when he said, “…her husband rides a bumper in the president’s procession” and “calling Mr. Oswald” and “…if you were taking home movies, there’s a chance you might have seen him.”

But forty-five more years have passed since then. How well-known is all that Dallas iconography now? I don’t immerse myself much in popular culture these days, but I suspect the events of 11/22/63 are not as generally familiar as they were two generations ago.

Any kid who was old enough to pay attention to public affairs — say, ten or older — experienced November 22, 1963 as a watershed moment, dividing the continuum into Before and After what happened in Dallas that day.

I was just starting junior high school at the time. Since I was born after World War Two and was too young to remember the Korean War, I had experienced nothing similar in my lifetime. And I experienced nothing like it afterwards until 9-11 came along thirty-eight years later. I was seasoned and jaded by then, however, so it didn’t make as much of an impact, but it was a similar cultural moment.

As far as I could tell, adults were similarly affected by the assassination. I was in band practice that day when the news came in, and I remember the stricken face of our band teacher as he relayed the news to his students.

That was late on a Friday afternoon. The shock and horror on TV continued throughout the weekend, augmented by the murder of Lee Harvey Oswald on Sunday, which meant that the principal suspect would never face a public trial. The solemn, elaborate funeral for JFK took place on Monday, and we watched it live on TV. Kids got out of school for the occasion, if I remember correctly. 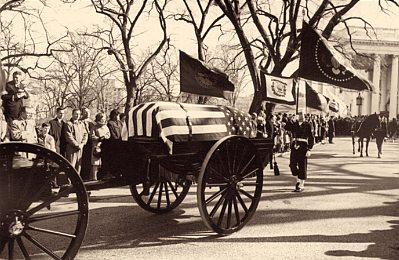 In retrospect the Kennedy assassination seems to mark the end of one era — which might be called the Post-WW2 Period — and the beginning of another one, for which a succinct name does not come readily to mind. The attempted assassination of Ronald Reagan in 1981 did not have the same effect, partly because he survived the attempt, and partly because times had changed by then. The next divide might have been 9-11, but that’s still too recent for me to decide.

The death of JFK and the inauguration of Lyndon Johnson ushered in an era of rapid changes — the Gulf of Tonkin resolution, the Civil Rights Act, the Vietnam quagmire, the Summer of Love, 1968, student rebellion, Kent State, Watergate, the fall of Nixon, and eventually Jimmy Carter’s stagflation. After 1980 the pace of change slowed, but by then the devotees of the Frankfurt School had begun their long march through the institutions. For the next thirty years the Marxist termites patiently continued hollowing out the heartwood of our culture until they finally took full control after the election of Barack Hussein Obama.

In 1963 the country wept for the end of Camelot. In 2021 it joyously celebrates the Modern Multicultural Babylon that we are all forced to live in.

My, how times have changed.

The presidential election of 1960 was the first one I paid attention to. I wanted Richard Nixon to win, much to the amusement of my parents.

By the time of the fateful motorcade in Dallas, however, the media hagiography surrounding President Kennedy had had its effect on me, and I had become a devotee. It was partly because of the Berlin Wall and the Cuban Missile Crisis — my natural patriotism kicked in. But the Camelot president was also a compelling speaker, effective enough to grip the mind of a 12-year-old.

On the day of the funeral I remember how devastated I felt watching Jackie and her children accompanying the slow procession of the caisson bearing her husband’s casket. Those little kids — it was heart-wrenching to see them.

And everyone is gone now except for Caroline — her parents, her brother, her uncles. Numerous cousins are still extant, but the Kennedy mystique thinned out and dissipated when it was dispersed among so many people. Her handlers tried pushing Caroline into politics some years back, if I remember rightly. The media would have loved to see it, but somehow nothing came of the project.

The golden haze of Camelot burned off long ago for me, years before Ronald Reagan was elected. It hung on longer for many liberals, but even for them the glow eventually faded. One reason was that John F. Kennedy’s actual words, as recorded in his speeches and ghost-written prose, were antithetical to the new progressive ideology of the Democrat Party as it moved farther and farther left. By today’s standards, much of what Kennedy said would mark him as a right-wing extremist, if not a potential domestic terrorist.

Times have changed. When I look back on those years, my nostalgia is not for the Prince of Camelot himself, who was eventually revealed to be a posturing, manipulative womanizer. I’m homesick for a time when our country still had a common cultural fabric, before it was shredded and scattered to the four winds. The solemn ceremony of John F. Kennedy’s funeral was a moment that could be collectively shared and understood by millions of people. That sort of moment would be impossible today.

I don’t think it’s just my recollection of my childish feelings that makes it seem that way. American culture really was more cohesive in 1963, but it has since been deliberately shattered by malign forces that have striven to destroy it in order to build the Brave New World we live in now.

I am repeatedly startled to find myself living in this ghastly dystopia of 2021. It’s hard to believe that we could have come to this in fifty-eight years. Tempus fugit.

15 thoughts on “From Camelot to Babylon”