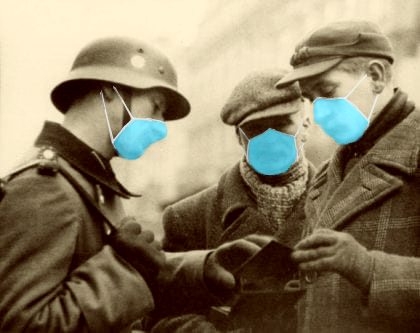 I’ve decided to practice what I call “radical honesty” concerning my failure to be injected with the experimental mRNA medical treatment intended to mitigate infection with the Wuhan Coronavirus. I will decline to discuss my “vaccination” status with anyone who does not have an official (i.e. medical) reason to know it, and I will not attend any event where showing a “vaccine passport” is a requirement for entry. If that restricts my options — including my options for medical treatment — then so be it.

It seems to me that obtaining a forged certificate of vaccination helps legitimate the system, in a way. It is a tacit acknowledgement that the government is in charge of your life. You flout the rules using a forged pass, and thereby become a scofflaw, but by your actions you are affirm the ascendancy of the new totalitarian system.

Refusing to accede to such bureaucratic measures is more difficult, and may eventually become quite risky, but it feels more honest to me. It allows me to retain my sense of personal integrity, even though I may suffer for my decision in the long run.

Not all “vaccine hesitants” feel the same way. I have a number of friends who have obtained fake vax passports, or plan to do so. But that approach may not be risk-free, either, as the following report from Germany suggests.

Many thanks to Hellequin GB for translating this article from Epoch Times. Note: the phrase “traffic light parties” refers to the upcoming coalition government of the Social Democratic Party (SPD, red), the Free Democratic Party (FDP, yellow) and the Greens:

Plans: Up to five years in prison for falsifying vaccination records

False information on the vaccination card, falsified test results — anyone who tries to circumvent the applicable Corona rules in this way may face severe penalties in the future. According to the plans of the traffic light parties, forgers of Corona tests, recovery or vaccination certificates are threatened with up to five years in prison in the worst case.

This provided for in a draft of the future Corona regulations, which are to be decided in the Bundestag on Thursday. The draft, which was made available to the German Press Agency, was discussed in the main committee of the Bundestag on Tuesday evening.

According to this, the not only production and also the knowledgeable use of falsified vaccination certificates should be punishable in the future. The regulation clarifies the criminal liability in the event that an “unauthorized person” issues a test, it is said. Knowingly using false test evidence “with the purpose of deception” is also punishable.

In particularly serious cases of “unauthorized issuing of health certificates”, if “the perpetrator acts on a commercial basis or as a member of a gang”, a prison sentence of three months to five years might possibly be imposed.

I’m pretty sure that this will only be implemented against native Germans; against criminal migrants from Islamic and African countries this would be considered racist.

12 thoughts on “Criminals Beware! You, Too, Will Be Assimilated.”