Big news tonight from Sweden that the artist Lars Vilks, best known for depictions of the prophet Muhammad, has been killed in a car accident. Two police officers assigned to protect Vilks were also killed in the crash. As police were involved in the crash, it is currently being investigated carefully.

It’s too early to say whether cultural enrichment was involved in Mr. Vilks’ tragic death. 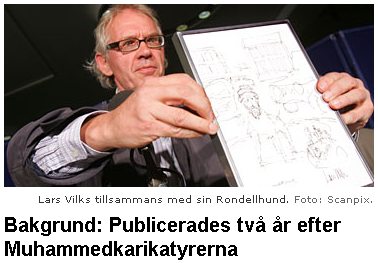 I’ll be writing more about the legacy of Lars Vilks in later posts. For now, I’ll just quote from what I said back in March of 2015:

Although he would probably not agree with the characterization, the Swedish artist Lars Vilks is a hero of the Counterjihad movement.

Like many other people who have chosen to criticize or mock Islam, Mr. Vilks’ life has been in danger for years. Last month he was the target of a failed assassination attempt in Copenhagen. Throughout the aftermath of this incident, and during all his previous tribulations, the artist has remained steadfast in his defense of free speech as an absolute. For the past eight years he has never retracted or groveled or apologized to Islam. His position in March 2015 remains the same as it was in July 2007.

In the fall of 2007, at the height of the initial controversy over “The Prophet as a Roundabout Dog”, someone asked Mr. Vilks if drawing the cartoon was worth dying for. In reply he said simply, “Yes, it is.”

That’s what makes him a hero.

I never had the privilege of meeting Mr. Vilks in person, but he was kind enough to send the following drawing to us, which he drew especially for Gates of Vienna: 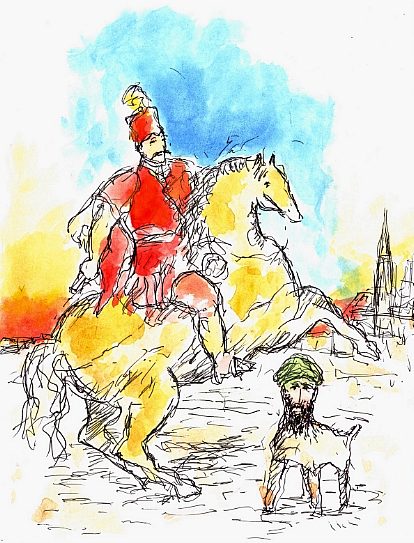 Lars Vilks: Jan III Sobieski and a rondellhund at the Gates of Vienna