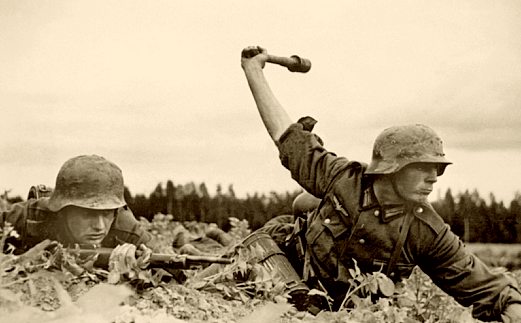 The peculiar article below concerns the German military’s bid to acquire extremely detailed maps of Russia — why in the world would they need such data…?

Hellequin GB, who translated the piece, includes this skeptical note:

If this isn’t just a hoax, I seriously wonder with WHAT would they plan to invade Russia with? Shotgun Uschi [Ursula von der Leyen, former defense minister] made sure that the German Armed Forces cannot operate due lack of spare parts, tanks, airplanes… you name it, they lack it. I’m pretty sure that the Taliban is now better armed than the German Bundeswehr, thanks to Creepy Dementia Joe.

And Uschi’s successor AKK (Annegret Kramp Karrenbauer) has done nothing except twist the knife left, right and center. THIS IS A JOKE in more ways than one.

The translated article from Anonymous News:

Questionable tender: Bundeswehr is apparently planning to march into Russia

A few days ago Die Welt reported on a tender by the German armed forces concerning geographical information about Russia. This somewhat peculiar formulation is necessary because the cards are not simple. It’s about a geographic information system. While the simple idea that it is a pile of current maps, as one is used to in everyday life, can send a shiver down your spine; since the Bundeswehr, whose constitutional mission is defense, has lost less than nothing in Russia, a geographic information system is far more sinister.

The tender reveals this goal with the phrase “vector data high resolution”. It is important to know that graphics and images can be created and stored on computers in two completely different ways. The one that most computer users are familiar with is made up of pixels, like a classic halftone print of a photograph. The other, the vector-based form, consists of mathematical formulas and additional properties. A curved red line is then a sequence of different curve formulas with the additional properties of line width and color. Graphics programs and CAD systems work with this type of data.

In contrast to files made up of pixels, the vector-based graphics have a much smaller volume and are easier to change (which in this case is of little importance) or to combine with additional data. As a result, it is possible, for example, to have three-dimensional models calculated using this data.

Now we are talking about a military project that is based on the images of military satellites. Two things have to be said about this. First of all, that the resolution (1:50,000) specified in the tender can be relocated to the realm of the imagination. “Military satellite systems such as In contrast, the KH-8 (Keyhole), for example, achieved a resolution of ten centimeters on the ground as early as the early 1980s to identify military equipment on the ground,” said a lecture at the Hamburg Forum for Geomatics in 2002. Between this resolution and the present, there are almost 40 years of further development, during which photocells have become more sensitive and data volumes have become easier to transfer. The current resolution of images from military satellites is likely to be in the millimeter range.

The second point that should not be overlooked is that military satellites don’t just snap pictures of the earth’s surface. At least not in the sense that they only take pictures in the spectrum of visible light. You can also do the whole thing in the infrared or radio wave range. However, this opens up completely different information.

A geographic information system now links the data obtained in this way with further information. For example, data on administrative centers and supply infrastructure for the geographic image of a city. Where are the hospitals, where is the water supply, the power plant, the television station… These are data that are obtained from the additional spectral ranges on the one hand, but can also be linked directly to the image on the other.

The company that won the tender (“for technical reasons” without competition) is called ARGE VEHA; that stands for Working Group for Vector Data Acquisition High Resolution. It is a foundation from the IABG in Dresden, the GAF AG in Munich and the Infoterra GmbH in Friedrichshafen.

In the self-description of Infoterra is “one of the world’s leading providers of radar satellite data and services. The company holds the exclusive commercial rights of use to the German radar satellite TerraSAR-X, which has been in operation since 2008, and to TanDEM-X, which was successfully launched on June 21, 2010.” It is a granddaughter of EADS. The IABG described its tasks in 2007 for the opening of its Dresden “Geodata Factory” as follows:

“Satellite images alone are not enough to provide our troops on missions abroad with the information they need for the mission and self-protection. In order to be able to use the satellite photos optimally in geographic information systems, they must be vectorized and attributed. Properties are assigned to the vector data such as climate, vegetation, drivability of the site, building use, etc.”

Is the picture of what this is about becoming a little clearer? Mind you, we’re not talking about geospatial data about Germany or one of its immediate neighbors, we’re talking about Russia. In the concrete application, you have to imagine it this way: In the staff there is access to all data levels, i.e. in addition to the terrain structure and other topographical information, also to the social and technical information that is linked to the vectorized map. If printed maps are required, they run out of the plotter with the desired combination of information. Troops that are given certain tasks receive the relevant map parts in digital or, if necessary, in analogue form. The tank driver would therefore know in advance exactly where a swamp hole is or how the respective obstacles can be bypassed.

Maps with such a density of information are only of interest if you actually want to act militarily in the area shown. It can hardly be assumed that the Bundeswehr can produce maps of the Central African Republic. But it should and shouldn’t need these kinds of “maps” of Russia either. Because if there was anything to the Russian threat constantly voiced by NATO, it would rather need maps of Poland; as is well known, this lies between Germany and the Russian border. Maps of Russia that go beyond what the innocent can buy or see on Google Maps would only be needed if it is not about defense, but attack.