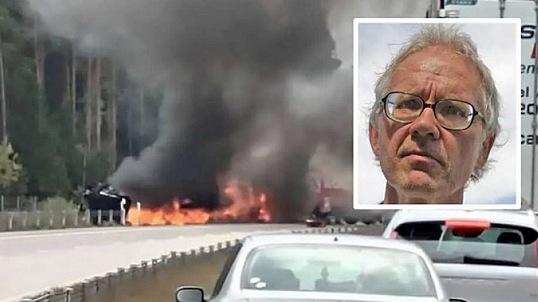 The latest word on the car crash in which Lars Vilks was killed is that the vehicle carrying him was traveling at 160 kph (99.36 mph) and that’s how it was able to leap the central barrier into oncoming traffic.

The policeman who drove the car carrying Lars Vilks is being investigated for gross negligence in traffic and causing another person’s death after information that the vehicle was driven at speeds up to 160 kilometers per hour.

The investigation is being led by Chief Prosecutor Kajsa Sundgren at the Special Prosecutor’s Office, since it concerns a police employee.

A witness tells Aftonbladet that he estimates that the bodyguard car was being driven at 160 kilometers per hour when it skidded and forced the center railing on the motorway.

A report of murder has also been made, which is being investigated by the Police Authority, as the suspicions are not directed at a police officer.

However, that investigation was described as a purely formal measure during this morning’s press conference, which will be launched with the aim of gaining access to certain coercive measures.

In the comment sections of the Turkish and Arab media, however, it is believed that Allah was behind Vilks’ death. Not least that a fire arose when the crash is highlighted as proof of it, as the one who depicts the prophet is to be burned to death, according to common interpretations of the Qur’an.