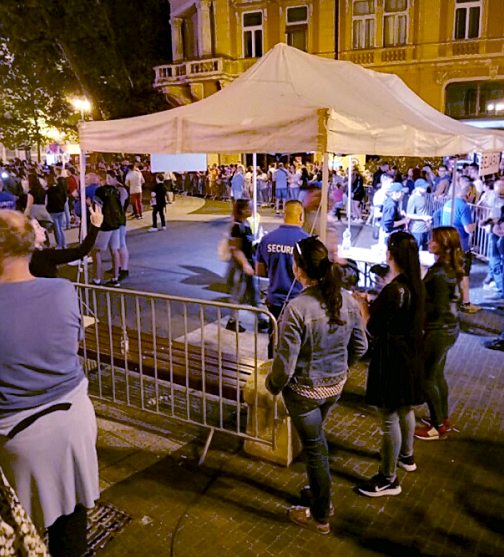 The shape of things to come is now becoming visible, as exemplified by the public apartheid imposed upon the unvaxed in the Hungarian city of Kaposvár.

Many thanks to László for translating this brief article from the online magazine Magyarjelen.hu:

Protective measures against the virus with barriers in Kaposvár (photos)

As I write this, President Joe Biden is poised to address the American public about his “six-pronged plan” to fight the Coronadoom through vax mandates and other measures. He is expected to announce a “vaccine” mandate for all federal workers and contractors. That’s a tougher policy than the one he announced in July, which was a vax or test-and-mask requirement for federal workers.

Back then he had harsh words for the vaccine-resistant:

Biden, seemingly fed up with persistent vaccine resistance among many Americans, delivered a sharp rebuke to those who have yet to get shots, saying “they get sick and fill up our hospitals,” taking beds away from others who need them.

“If in fact you are unvaccinated, you present a problem to yourself, to your family and those with whom you work,” he said bluntly.”

At the same time, he expressed sympathy for people who have received their shots and are “frustrated with the consequences of the minority that fail to get vaccinated.”

The “vaccine” serves to divide people into two distinct groups: those who obey authority, and those who do not.

The groups are self-selected.

The screws can be continuously tightened on those who do not obey, forcing them to lead ever more restricted lives.

The unvaxed who eventually cave in and take the jab may regain their “freedoms”, but they will be monitored from then on, since they have displayed a disinclination to obey.

Those diehard holdouts who absolutely refuse to be “vaccinated” may be reduced to poverty and homelessness, depending on how draconian the “incentives” directed at them are. In Australia, for example, I expect the unvaxed will eventually be seen scrounging through dumpsters, and building hovels out of scrap wood and sheet metal at the periphery of garbage dumps — the COVID favelas of the New World Order.

In the USA we can expect a surge of migration from the lockdown states to Florida, Texas, and other states that have refused to sign on to the Coronamadness. That is, until the federal government orders an end to interstate travel without a permit — which is an idea that President Biden has already floated on behalf of the Powers That Be.

9 thoughts on “The COVID Favelas of the New World Order”