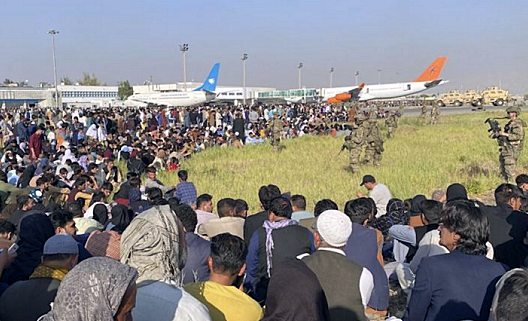 German authorities aren’t overly exercised about Germans who happen to be stranded in Afghanistan after the Taliban takeover. Culture-enriching “Germans”, however, are another matter. The following story describes an Afghan family from Wolfenbüttel in Lower Saxony. The puir wee Afghan bairns came to Germany as refugees because their lives were in danger in their homeland, so much so that they could only return home occasionally on vacation.

Many thanks to Hellequin GB for translating this article from RegionalHeute.de:

Schoolchildren are stuck in Kabul: “Suddenly it’s so real”

The twins, who originally came from Afghanistan, traveled to their old homeland with their parents and siblings during the summer vacation.

Wolfenbüttel. Three students from the Henriette Breymann School (HBG) are currently stuck with their family in Kabul. A family visit turned into a nightmare for the family of eight — because terror, destruction and unrest reign in the country that was once their home. Nobody knows when the family will be able to return to their new home in Wolfenbüttel.

“It’s very strange that what you usually only know from the news suddenly becomes so realistic,” says HBG headmistress Katrin Unger in an interview with RegionalHeute.de. The news that three students from her school are stuck in the crisis area, exposed to the Taliban terror and uncertain when they will be back in Germany, was received by Katrin Unger a week before school started. The father of her pupils — a pair of twins attending the eighth grade — informed her by email that the third child of the family could not be enrolled at the HBG as planned because they were in Kabul and it was not possible to leave the country. “I then immediately contacted the father and asked what we could do,” reports Katrin Unger, who is still stunned.

The family had traveled to Kabul at the beginning of the summer vacation to visit their family. “Of course, the first question is always why the family flew to Afghanistan in the first place. In fact, the family went there with a portion of good faith. And they were not entirely alone in their assessment. There were politicians who also misjudged the situation,” she says. A return trip for the family — the youngest child is only one and a half years old — was then simply no longer possible. “They were completely surprised. It came so suddenly. Suddenly the Taliban were there and the airports were closed. That must have been exactly how it was perceived in the media. And the family didn’t want to go into the throng with the small children.”

Many students and teachers are very affected, says Katrin Unger. There is fear and great uncertainty among classmates and teachers. Especially with those who know the siblings well. “There are a lot of teachers who are very affected. And the closer the teachers and students were to the children, the greater the sympathy. It was already a mess for them to get started and the joy of seeing them again.”

The situation in Afghanistan is now being discussed more intensively in school in order to educate and take away fear and insecurity. “There are now two empty places. And it was clear from the start that the colleague would address the issue of the children. The students had to find out the background and of course we tried to calm them down. But we also had to make it clear to them about where and why one has to worry,” says Unger.

The contact is still there. Students, teachers and Katrin Unger herself try to keep in touch with the family. But that is becoming more and more difficult, she says. Often the contact is limited to brief inquiries. In addition, it is noticeable that the connection is getting worse and worse. During the last contact on Tuesday, a son of the family reported that they were trying to get to Pakistan by land. The headmistress doesn’t know if that’s true. However, there has been no communication since then. “I tried again today myself. And the students tried it, too. Unfortunately, no one could be reached.”

Further contact with the family in Kabul was established through a teacher who herself has Afghan roots. “The colleague’s husband has contact with the father via Facebook. Other than that, the students try to communicate with their classmates in Afghanistan via messages or video links,” says Katrin Unger, who knows that the family is more or less safe with relatives who reside on the outskirts of Kabul. “The schoolgirl has reported that she sometimes hears gunshots at night and as a girl no longer dares to go outside,” said the headmistress, who has already tried to pull strings to get the family out of Afghanistan as quickly as possible. But so far she has not been able to achieve anything at the Foreign Office. “Of course I understand that, too. The lines are now glowing.” Katrin Unger is understanding, but no less worried. “You don’t even want to imagine that a family with six children, who live here and have found a new home in Wolfenbüttel, and in which everyone except the mother has a German passport are not allowed to leave the country and return to their current home.”

Ministry of Education has intervened

Initially, Katrin Unger was unsure whether she should take action to help the family leave the country. But after the father had spoken out in favor of it and asked for help, she exhausted all possibilities. So far without success. The Ministry of Culture has now also contacted Katrin Unger and asked for a situation report. She was also asked by the ministry to go public. Likewise, the district and politicians have assured that they will get involved. The left-wing member of the Bundestag Victor Perli contacted Katrin Unger and assured her that the issue had been brought up to the Bundestag’s interior committee. Perli said in a press statement: “I am very worried about the family. In consultation with the district administrator, I contacted the Foreign Office immediately and asked for support. The goal is a quick return of the family.”

“I wasn’t sure whether I should go public with it. But after even the Ministry of Education and Culture asked to do so, I took action. And then it became a sure-fire success. The thing is now picking up speed, and the ministry, the district and also the politicians here have completely different levels and opportunities to make a difference,” says Katrin Unger, and hopes that she will soon be able to welcome her students and their families back to Wolfenbüttel. When that will be is uncertain.

I guess one has to be” German” from another culture to be helped by the German authorities.

Just a little anecdote from my personal experience with the German government during the Rwandan Genocide. There actually wasn’t ANY experience to be had, because they didn’t give a tinker’s dam at the German Embassy about what was happening and the dangers expats were in. Their motto was more along the lines of:” See no Evil, Hear no Evil”.

Nothing has changed in that regard when it comes to Native Germans, now, has it?