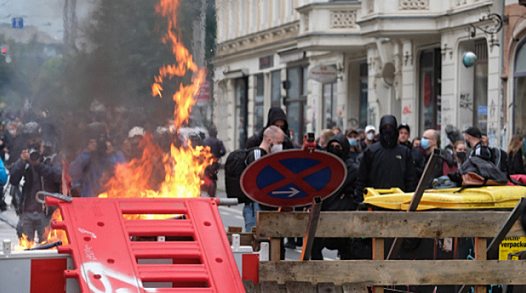 In Leipzig yesterday the black block built burning barricades, bashed banks, and bopped burghers with bottles. The anti-fascist allochthons of alliteration were allegedly allowed to allot allopathy to all.

The Black Block pushed its way through Leipzig today.

An estimated 5000 participants protested from the center to the Connewitzer Kreuz on Saturday, wrapped in billows of smoke and fog. A martial act. And one that escalated and got visibly out of control. Because: Autonomous people hurled bottles, stones and firecrackers at police officers. Eventually barricades burned.

“We are all anti-fascists: inside — we are all linX” was the motto of the elevator from Johannisplatz to Connewitzer Kreuz. The initiator of the demonstration and member of the state parliament, Juliane Nagel (42, left), actually wanted to prevent excessive violence during and after the demonstration — as was most recently the case ten months ago.

“We have good, experienced stewards and our message to the participants is clear: We want to remain peaceful,” said the member of the state parliament. This wish remained unfulfilled.

The demonstration stopped at the police headquarters for a short time. Objects, bottles, firecrackers and paint bags rained down on the entrance. A Commerzbank branch was attacked a few hundred meters away.

About 5,000 left-wing extremists were on the train on the Karli. They were only colorful at the head of the demo. The Black Block marched farther back, lighting flares incessantly. Radical protesters demolished several parked cars.

Around 2,000 officers from three federal states as well as the federal police, water cannons and helicopters were on duty. The police held back during the demonstration, relying on de-escalation.

The deployment was not only explosive because it took place a week before the general election, but also because a few days ago the criminal trial against the Connewitz left-wing extremist Lina E. (26) began.

“We are not the solidarity alliance for Lina E.,” Juliane Nagel assured BILD. “Our initiative was founded at the beginning of the year; we are only concerned with anti-fascism!”

In addition, they wanted to “take a stand against the shift to the right” before the election. However, there were a number of “Free Lina” posters held up during the demonstration.

When the vanguard of the demo reached the Connewitzer Kreuz after 5 p.m., bottles flew out of the protest march again. Shortly afterwards, stones were thrown at the Sparkasse branch at the Connewitzer Kreuz. At this point the participants in the demo, which had now ended, were no longer peaceful, nor — as announced — had they been brought under control by the stewards.

After 6 p.m. radical demonstrators began to erect barricades and set them on fire. The police used water cannons against flames and demonstrators. At least one anarchist has been arrested.

So “Querdenker” are harmful to a “peaceful” government-controlled society! Antifa, on the other hand, are pillars of socialist society. And what a surprise, the ANTIFA demo escalated in Leipzig yesterday.

Also, Facebook has apparently deleted around 150 “Querdenker” accounts and groups in order to ban harmful networks from the platform. When you look at this riot and hatred, and not just at yesterday’s demonstration, you wonder: Who is really harmful here?

5 thoughts on “Merkel’s Blackshirts Are Rallying”