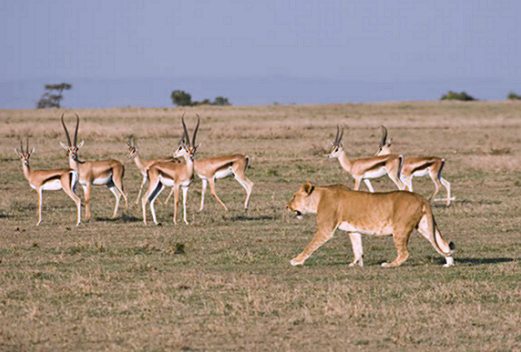 The aristocrats of the ecology movement are the predators, while ordinary people like you and me are the prey. In order to Save the Planet, we will be culled the same way a pride of lions culls a herd of gazelles.

Many thanks to Hellequin GB for translating this article from the German site Recentr.com:

The elite 1001 club behind the eco-agenda

Prince Bernhard [of the Netherlands] created “The 1001: A Nature Trust” together with Prince Philip to finance the activities of the WWF [World Wildlife Foundation]. On board was Anton Rupert, an African tobacco billionaire of Dutch descent who was involved in the secret society “Afrikaner Broederbond”, which controlled South Africa and which had implemented apartheid.[16]

For a long time, public information about 1001 was almost completely unavailable, and all that was learned was that handpicked members had to pay a membership fee of $10,000.

Similar to the Bilderberg Group, the principle of confidentiality applies, and you can at least learn from a leaked internal report that the 1001 Club holds regular meetings in Windsor Castle, at the residence of the Spanish royal family, and in distant places like Nepal.

According to leaked membership lists, the 1001 Club includes people such as:

Maurice Strong: Member of the Privy Council in Canada (British Commonwealth), Fellowship of the Royal Society of Canada.

He is considered the inspiration for former US Vice President Al Gore, who released the eco-propaganda film An Inconvenient Truth.

Baron Conrad Black: He owns major newspapers and companies and has been involved in many scandals. At times he was on the Privy Council of Canada. His friend, US President Donald Trump, pardoned him in 2019.

King Juan Carlos of Spain: Juan Carlos, who came from the house of the Bourbons, is a member of the powerful eco-organization the Club of Rome.

He is the eldest son of Juan de Borbón y Battenberg, whose mother was Victoria Eugénie von Battenberg, from the Welfen lines Hessen-Darmstadt as well as Saxe-Coburg and Gotha (the same lines as Prince Philip and Queen Elizabeth).

Henry Ford II: From the highly controversial family of automakers. The Ford group goes back to the scientific network of the Royal Society or the Guelph nobility (see chapter in this book about the auto industry). His grandfather Henry Ford was one of the leading anti-Semites, supported the NSDAP and provided both the Nazis and the Soviets with technology that was essential to the war effort.

Robert McNamara: He was a manager for Ford Motor Company, US Secretary of Defense under JFK, and President of the World Bank. In the Vietnam conflict he relied on the tactic of a brutal war of attrition. The communist North Vietnamese used Soviet technology that originally came from the United States.

Dr. Alfred Hartmann: Worked for the Rothschilds and was involved in the scandal surrounding the notorious bank BCCI. More details in the Spiegel article “Cloudy Source” from 1992.

Peter Cadbury: Son of Sir Egbert Cadbury. The family business is sweets. The company received its first Royal Warrant from Queen Victoria in 1854.

Baron Buxton: Holder of the Royal Victorian Order, co-founder of the WWF. Involved in the Natural History Museum, the Wildfowl and Wetlands Trust, and the London Zoological Society.

Baron Thyssen-Bornemisza: Grandson of August Thyssen, the founder of a rolling mill from which Thyssen AG later formed into a large corporation that was important for the Nazis. Fritz Thyssen had connections with Skull & Bones. His first wife was from the noble family Lippe; see also Prince Bernhard von Lippe-Biesterfeld. His third wife was Fiona Frances Elaine Campbell-Walter of noble British ancestry.

Mobutu Sese Seko: President of the Democratic Republic of the Congo from 1965 to 1997. Previously, the Congo was in the hands of the Dutch nobility, who let millions of Congolese die.

Salem Bin Laden: Saudi Arabian investor and businessman and the eldest half-brother of Osama bin Laden. From 1972 until his death, he headed the Saudi Binladin Group, a family business founded by his father Muhammad bin Laden. He had close business ties with George Bush Sr. as an investor through companies such as the Carlyle Group. He was also a partner in George W. Bush’s first company (Arbusto Energy Oil).

Agha Hasan Abedi: Founder of the infamous BCCI-Bank, now the seventh largest private bank in the world. US and UK investigative agencies found the financial institution involved in money laundering, bribery, arms trafficking and the sale of nuclear technology, aiding in terrorism, initiating and promoting tax evasion, smuggling, illegal immigration, buying real estate and banks, and the promotion of prostitution was related. There are links between the BCCI and Jeffrey Epstein’s network.[17]

Stephen Bechtel: Heir to the powerful construction company Bechtel Corporation with links to the CIA. Bechtel helped China become a superpower and built many nuclear power plants in the US. In 2003 the group won a US state contract to rebuild Iraq. The Mining & Metals (M&M) department does mining for the extraction of raw materials such as aluminum, and there is also a department for oil, liquefied gas and chemicals.

Lukas Hoffmann: Swiss pharmaceutical entrepreneur from the Hoffmann-La Roche group, which produces drugs such as Tamiflu against epidemics, as well as cancer drugs.

With Tamiflu, which was recommended by the WHO against avian flu based on dubious studies, they made billions.[18]

Gianni Agnelli: Head of FIAT. The group once sold important vehicle technology to the Soviet Union. The Agnelli clan has ties to the nobility.

Wallenberg family: Large industrialists from Sweden. In the 1970s the clan managed 40% of Sweden’s stock market and industrial workforce.

Rothschild family: Built up by the Landgrave of Hesse-Kassel (Welfe) and the British throne. British intelligence agencies cultivated the conspiracy myth that the Rothschilds made a fortune after the Battle of Waterloo and took control of the City of London and the Bank of England. The Rothschild myths are at the core of the conspiracy theory about Jewish world domination.

The Watson family of IBM: Thomas Watson supplied extremely important punch card computers to the Nazis. See also the relevant chapter in this book. Watson quickly transformed from a Nazi proponent to a supporter of the American war effort.

Peter von Siemens: He was committed to nature conservation and land conservation, and was a full member of the German Council for Land Conservation. He supported the WWF and the Bund Naturschutz, which awarded him the Bavarian Nature Conservation Prize in 1975.

Axel Springer: Responsible for anti-Semitic propaganda in the Third Reich. The British occupiers gave him permission to publish newspapers, magazines and books after the Second World War. Member of a Hamburg Masonic Lodge. Axel Springer Verlag became extremely powerful in the Federal Republic of Germany and is regularly represented at Bilderberg conferences.

Otto Wolff von Amerongen: One of the most influential entrepreneurs in Germany after 1945. He was also referred to as the “pioneer of trade with the East”. The company that his father had founded supplied wolfram for the Nazis and procured Jewish property. Otto sat on many boards, including at Exxon (Rockefeller). While he was working in the inner circle of the Bilderberg organization, he established economic ties with the Soviets.

Friedrich Flick: He was one of the most important German entrepreneurs. At the time of the Second World War, his Flick group had extensive company holdings, especially in the armaments sector. In the Flick Trial, he was sentenced to seven years in prison as a war criminal.

In the post-war period he began to rise again, becoming one of the richest men in the Federal Republic of Germany. In the war year 1944, a total of around 130,000 workers were employed within the Flick Group, and about half of them were employed and exploited as forced laborers and concentration camp prisoners.

After the war and imprisonment, he became one of the most powerful men in Germany and promoted politicians.

In the course of the affair about illegal payments by the Flick Group to German politicians, Helmut Kohl was also charged.

In the course of the investigation it had been shown that in the 1970s all parties represented in the Bundestag at that time, i.e. CDU, CSU, SPD and FDP, had received donations from the Flick Group — in some cases through non-profit organizations such as the Citizens’ Association.

The investigative committee made it known that between 1969 and 1980 more than 25 million Deutschmarks had flowed from Flick’s black coffers to politicians from the CDU / CSU, FDP and SPD.

Apparently, at the 1001 Club, nobles, politicians and business leaders meet with dictators and other sensitive people to do business that often revolves around natural resources.

The suspicion arises that the old British Empire, including colonialism, is being secretly continued, and that environmental protection is also practiced as a side effect.

For example, when the apartheid system in South Africa wavered (see the secret society “Afrikaner Broederbond”), elite circles simply got military experts and created camouflage companies such as KAS, which were officially intended to stop poachers.

It was noticeable, however, that many of those killed belonged to the ANC party, which wanted to abolish apartheid. The South African Army and KAS themselves profited big time from the poaching and illegal trade.

The front company KAS was founded by David Stirling (British Army) and Colonel Ian Crooke (a decorated veteran of the special unit SAS) and had the support of Prince Bernhard.

Afterwards, the WWF distanced itself from “Project Lock”.

An investigation initiated by Nelson Mandela in 1995 found that mercenaries from Project Lock had trained UNITA and Renamo anti-communists.[19]

In the nature and wildlife reserves total oppression reigned and made excellent territory for training mercenaries.

The 1001 Club is said to be subordinate to the British Privy Council and the MI6 secret service.

A number of green NGOs have leading figures or founders from the 1001 environment, such as the Club of Rome, Earth Council Alliance and the Wildlife Conservation Society.

Groups such as “Extinction Rebellion” want to paralyze the economy and turn the social order upside down with increasingly radical acts of civil disobedience.

It has been shown that one could resort to tougher methods if politics does not fulfill the wishes of Extinction Rebellion quickly enough and to the desired extent.

In the worst case, eco-terrorists (with whatever backers) commit an attack with a pathogen like Ebola in order to reduce the population and blame climate change, including the population explosion and human intrusion into natural areas, for the outbreak.

During the 17th Century, in order to save money, the Military relied upon civilian contractors. Army provisioning was founded on the Antwerp and Amsterdam grain trade, and developed through the omnipresence of war in the Low Countries.

By the 1650s the business was dominated by the Sephardic Jews, mainly of Portuguese origin, who were regarded as neutrals, enabling them to travel freely in search of sources of cheap supply.

Needless to say, they supplied the opposing Armies in Europe and made tons of money.

Amongst the principal contractors was Samuel Oppenheimer of Heidelberg (1630-1703), who began as financial agent and victualling contractor to the garrisons of Elector Karl Ludwig of the Palatinate. In 1673 he formed a consortium to provision Leopold I’s Austrian Army of the Rhine. Oppenheimer supplied the entire Austrian War effort in Hungary after 1683, whilst his son, Emmanuel, victualled the imperial garrisons in Western Germany during the “Nine Years’ War” etc. etc…

So, the story of the Rothschild Family making money during the Napoleonic Wars is really not so farfetched at all.

6 thoughts on “Lion or Gazelle?”