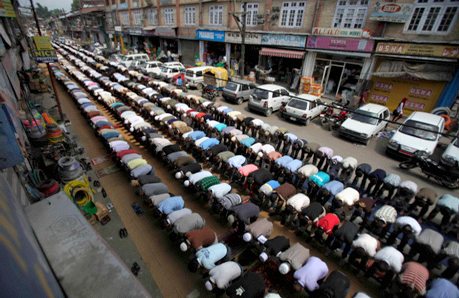 In the following excerpt from a French TV talk show, the popular commentator Eric Zemmour discusses the Great Replacement, drawing on a recent and controversial study of demographic information on migrants in French cities.

The article below from the French online magazine Causeur (also translated by MissPiggy) describes the demographic studies referred to by Eric Zemmour in the video. Open the original article to see the maps:

Observatory of Immigration and Demography — August 24, 2021

Seine Saint-Denis, inner Paris… but also Rennes or Limoges (!): the proportion of 0-18 year olds born to non-European parents is exploding in many urban areas. A historic demographic shift. Analysis.

For many years, the issue of ethnic statistics has been a hot topic in the debates on migration, its scientific approach and its repercussions in French society.

Indeed, the current jurisprudence of the Constitutional Council considers that “if the processing necessary for the conduct of studies on the measurement of the diversity of people’s origins […] can be based on objective data, they cannot be based on ethnic origin or race without violating the principle set forth in Article 1 of the Constitution” (decision of 15 November 2007).

Nevertheless, if the composition of databases based on “race” or self-declared ethnic origin — such as exist in the United States or in Great Britain — remains formally prohibited, the same is not true for the national origin of individuals. Based on census data, INSEE maintains a whole statistical apparatus relating to the number of immigrants living in France (NB: only individuals born abroad are considered immigrants), the number of children born to immigrant parents and their countries of origin.

It is on this basis that France Stratégie, a forward-looking organization affiliated with the Prime Minister, published a vast study in 2020 devoted to “residential segregation in France”.

The scope of the study

Looking at the INSEE data available for the 55 French “urban units” with more than 100,000 inhabitants, France Stratégie’s teams have drawn up a detailed map aimed at understanding “the unequal distribution in the urban space of the different categories of population” with regard to several criteria measured in 2017: age group, activity status (employed/unemployed/inactive), socio-professional category, housing tenure status (HLM or other)… But also direct migratory origin: immigrants and their children.

Thanks to an exhaustive cartographic transposition work that should be praised, the site created for the occasion allows one to visualize, for each of the large and medium-sized French cities:

The percentage of European / non-European immigrants among 25-54 year olds;

The percentage of children born to European / non-European immigrants among 0-18 year olds.

By mobilizing the depth of the census data, this site proposes to visualize the history of these statistics on several milestones of the last fifty years: in 1968, 1975, 1990, 1999 and 2017 — the last year studied. It is thus possible to obtain a faithful vision of the major demographic transformations that French cities have undergone over the past half-century.

Said mapping work is carried out both at the level of communes and IRIS zones (“Ilôts regroupés pour l’information statistique”), which correspond to a division by neighborhood of about 2,000 inhabitants each applied by the INSEE. The choice of this fine grid offers us real precision in the geographical analysis of the phenomena.

In view of the very rich elements thus made available, it is clear that the changes generated by migratory flows are particularly striking, as are the phenomena of geographic separation that they induce in all metropolises.

We propose to examine a few significant examples here, focusing on a single indicator: the percentage of 0-18 year-olds born to non-European immigrants and its evolution since 1990.

Let us begin with two zooms in the urban unit of Paris, which will focus on:

The department of Seine-Saint-Denis,

The capital city within the city limits.

INSEE data mapped by France Stratégie tells us that immigrant children or children born to non-European immigrant parents are in the majority among the 0-18 age group in more than half of the municipalities of Seine-Saint-Denis in 2017.

This shift is particularly marked in certain communes:

If the same analysis is conducted by IRIS zone, it becomes clear that the percentages concerned are even higher in some neighborhoods of these cities — up to 84% in some areas of Clichy-sous-Bois:

4 thoughts on “Eric Zemmour: “The French People Are Being Expropriated From Their Country””