Our English correspondent Seneca III sends his take on the impending Great Reset, as seen from a British perspective.

Atreus paused in his pacing and supported himself with an arm outstretched to a colonnade’s crimson pillar. Sunken blue eyes examined me closely. ‘Apart from material gain I have two purposes. First, by expanding our territory to make Mycenae Achaea’s paramount power. Second, to close the coast to seaborne Dorians infiltrating across the Gulf.’

‘They are crossing in numbers, sire?’ Bunus inquired.

‘The movement’ said Atreus grimly, ‘has attained the proportions of a mass immigration. They land and take to the mountains, where they reinforce the Goatmen. If we don’t soon stop it we will be embroiled in a ceaseless war of attrition. And not Mycenae alone. Every civilised city will likewise suffer.’

Heroes shook doubtful heads. Some smiled behind their hands. Goatmen raids and counter-raids had become a way of life, a competitive military exercise to keep warriors on their toes, a salutary irritant like blistering a horse. None conceived them a major menace.

Do nations commit suicide without ever realising they are doing so? Doubtless they do. I look around me these days and I see and hear of things happening throughout the West that I could never have imagined even in my darkest dreams.

Whilst I appreciate that life and culture are both dynamics and the evolution of human social-political organisation is a continuous process, I see nothing that would encourage me to think this current vector will in any way lead to a better world and way of life. It would appear that the people of Britain and Europe, invaded from without and betrayed from within, have become so scared of losing what material things they have accumulated that they do not comprehend the actual horrors of the poverty, strife and lack of any personal freedom that Multiculturalism and the Great Reset will bring.

They appear to have given up all hope of holding onto the freedoms that our ancestors purchased for us with their blood. Rather, they have chosen to quietly sink into quasi-servitude, afraid to fight for that which is ours, ours to hand on to our children, not to anyone else. They huddle around the warm fire of history hoping for better times and doing nothing to counteract the increasingly threatening noises in the darkness behind them.

In essence, Britain is being conquered by a cabal of governing cliques who are determined to destroy our whole way of life. The rulings coming out of Westminster, Edinburgh and Cardiff, initiated or parroted by an equally treacherous media, are carefully devised to disenfranchise long-heritage native Caucasian citizens and foreclose any effective resistance to our ethnic cleansing.

They have organised it in such a way that our once green and pleasant land has been fragmented by an invasive horde of predatory alien cultures and primitive belief systems encouraged, enabled and supported by our own political, spiritual, corporate and civil institutions. Metaphysically speaking, we are being subjected to the ideological equivalent of a scorched earth policy. Popes, Archbishops and other princes of the Christian Church have close-ranked with and genuflected before the purveyors of a barbaric political power system founded on atrocity and slavery several centuries ago and maintained thereby to this day.

By effecting this sedition through innocuous pinpricks over a period of decades they have induced a terminal osteoporosis of that conceptual skeleton to which the sinews of a strong, functional society must be anchored. Thus, it is inevitable that the full extent of our weakened condition will only become apparent when one straw too many finally breaks our back, and by then both the will and the means to resist will have been sapped, and the complacent masses will find themselves unarmed and unorganised, naked in the face of their enemies.

Add to this the fact that we are being swamped by waves of psychotically damaged people forcing their bizarre sexual aberrations upon us. They are lauded by the state and the media and funded quietly through the back door with taxpayer’s money. Their tearful protestations are designed to convince us to accept their illness as normal … under threat of punishment if we refuse to acknowledge that such predilections are desirable or in any way contribute to society as a whole.

We are become the new benighted, the victims of decades of ethnic, spiritual and cultural treason in high places. We have aided and abetted this through our own timidity and quiet magnanimity which has led us into a world where now to be patriotic, heterosexual and rational is to become stigmatised and persecuted.

All of the foregoing begs the question: ‘How has this parlous state of affairs come to pass’? Well, part of the answer lies in what was East Germany. It was there that the rules for the control and suppression of postwar populations were formulated, codified and refined, an inheritance from the Nazi era with a significant input from the similar Soviet system, and were then adopted in the main by the secret enclaves of Bilderberg, Davos, the World Economic Forum and the architects of the EU.

It worked successfully for quite some time, and despite German integration it has been quietly spread throughout the Anglo-Euro Ecumene by power hungry politicians and their dependent parasites. Meanwhile, whilst the suppression of free thought, speech and action proceeded apace the convenient appearance of COVID simultaneously presented our Staatliche Gedankenpolizei (State Thought Police) with an opportunity to descend upon us utilising every tool of intimidation and suppression at their disposal. We are to be collectively emasculated, subdued and remoulded as obedient serfs.

This process has progressed small increment by small increment. Records released to The Times newspaper under the Freedom of Information Act show that by October 2017 more than 3,400 people had been arrested under the provisions of section 127 of the Communications Act 2003 for online comments. It comes as no surprise that many others have been arrested and prosecuted for committing thought crimes in person, as was the middle-aged woman who, in May 2018 in London, was arrested, threatened and intimidated for wishing someone a ‘gay day’ in what might even be a carefully orchestrated set-up in revenge for her public online humiliation and exposure of the fearful dhimmitude of the Metropolitan Police in Hyde Park some weeks previously.

And it does not stop there. How many people, I wonder, have responded to a knock on the door only to be confronted by a couple of muppets in blue loaded down with gadgets menacingly declaring that ‘We have come to correct your thinking’ or to accuse you of a ‘non-crime hate incident’, whatever that oxymoron is supposed to mean? 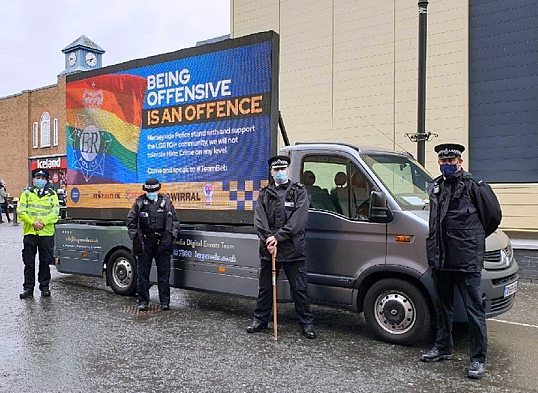 When the Legislative, Executive and Judicial Arms of any government become an unassailable law unto themselves and do not need to answer to the people there will no longer be anything resembling the soft power of democratic governance. Those in the driving seat will and do revert to unrestrained hard power in order to preserve their comfortable, lucrative sinecures.

Initially, dictatorship is imposed via the abuse and manipulation of language, its function being to peddle falsehoods. Censorship comes next, and then the denigration and erasure of memories of the past. This process has an established pattern. First, the past is ridiculed. Second, it is demonised and, finally, criminalised.

It is when the first stage is segueing into the second that an open battle of wills begins to emerge between those demanding the reinstatement of their traditional culture, customs, and freedoms and the totalitarian few, gathered together with their imported alien foot soldiers, who are attempting to destroy everything that was and is.

At that point it soon becomes evident that the only viable end game is that one side must completely eliminate the other in order to survive. There is no longer any room, nor necessity, for the so often fatal trap of compromise.

Have no doubts about it: If the situation becomes kinetic, and history suggests this has a probability higher than 0.5, then only the brave, the most determined and ruthless will prevail.

What comes after will not be particularly pleasant, either, so gird your loins, dear readers, and choose your side so that each will know the other and act together, and I do not mean in a party political sense either; that door has long been closed to us… now we will have to cross the Rubicon.

— Seneca III, in Middle England, on this 5th day of September in the year of our Lord 2021.

17 thoughts on “Crossing the Rubicon”