Many thanks to Gary Fouse for translating this article from Samtiden, an online newspaper published by Sverigedemokraterna. Note: this case has a Mohammed Coefficient of 100%: 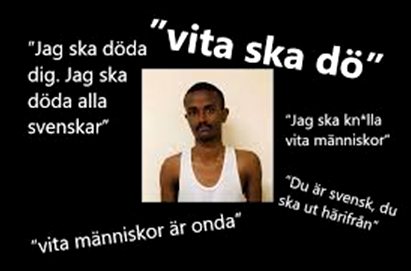 Clockwise from upper left: “I will kill you. I will kill all Swedes”, “Whites must die”, “I will f*** white people”, “You are Swedish. You must get out of here”, White people are evil”

Attacked women and made threats: “Whites must die”

The Somali who subjected at least eight women to insane attacks has now been charged in the District Court of Borås for assault and also for threatening female social workers.

One person who read the preliminary investigation against the Somali perpetrator is the journalist Joakim Lamotte. He describes it as frightening reading.

The defendant, Dawud Mohammad, without provocation, made outbursts and violent attacks against women. Men who tried to help the women were also attacked. In addition, he issued serious insults and death threats.

Another social worker stated that she was threatened via email, when Dawud Mohammad reportedly wrote things like, “I will destroy your life,” and “I will kill you all.”

Dawud Mohammad himself denies the crime, and in a police interrogation he says that, “It is all about racism,” and that police “want to fill up my file.” He also refused to speak with a police investigator because he was white.

Lamotte writes that the preliminary investigation is unpleasant to read.

“Not just for the violence that several people testify to, but also for the threats directed towards people on account of their skin color. At the same time, I recall that a Swedish TV employee this week reprimanded a viewer by explaining that whites cannot be affected by racism.”

“I wonder what this is if not racism?”

This Dawud Mohammad became a Swedish citizen in 2015. Since then he has been convicted of, among other things, narcotics crimes, threats against officials, and illegal driving.

And now he stands charged for several cases of abuse against women and threats of an openly racist nature.

9 thoughts on “Another Somali Success Story in Sweden”