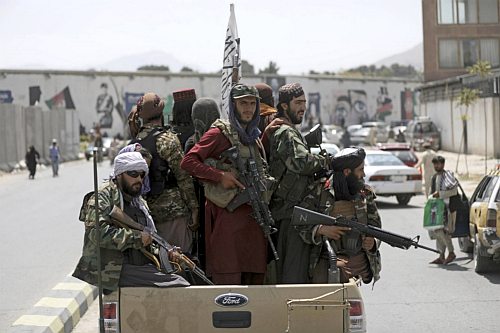 Many thanks to Gary Fouse for translating this article from the German site JournalistenWatch:

Triumph of the Taliban: The More Afghan refugees, the more Islamic sleeper terrorists

The security-political consequences of the Taliban triumph are for Germany perhaps graver than the refugee crisis in 2015, when the Merkel government, in oath-breaking irresponsibility, out of naïve humanitarianism, flooded the country with millions of people whose intentions and background were, in most cases, not known. Because the change of power in Kabul conjures up exactly the horror scenes that were fought there for 20 years and gives jihadists worldwide a tailwind.

After the terror attacks in New York, the West moved to the Hindu Kush — under the motto “War on Terror”, contradictory in itself because they were crooked and utopian words from the start. Germany, which under the then-Schröder government negligently and hastily declared “unconditional solidarity” with the USA, made its contribution. Then the terror was fought; but in the last few years, in which Berlin negotiators dealt with the Taliban in Doha, even more so now after the foreseeable takeover of power, the important lesson from the RAF [Red Army Faction] “You don’t negotiate with terrorists” has become obsolete. That yesterday the political leader of the Taliban, Mullah Baradar, was flown to Afghanistan from exactly where Merkel’s diplomats chatted diplomatically in air-conditioned luxury offices with the barbarians and where Germany will play in the World Cup next year, could not be more symbolic than the breaches of German morals and consistency.

Actually, the Taliban are now being made socially acceptable: The pseudo-pragmatism of a pathetic and spineless appeasement, which the despondent cowards of the West advise as conflict and confrontation readiness, will mean that the West will serve them just as it did with the Iranian mullahs. And even when Germany “suspends” its development aid payments (which flowed unchecked until last month, especially into the private box of the fleeing ex-president, Ashraf Ghani, who absconded with $164 million), one can assume that it will soon bubble up again. The Taliban have made a clever contribution to PR here, the generous promise to protect “women’s rights” (in conformance with sharia, you understand), and suddenly under the eyes of the public render themselves harmless. With the softened political amateurs, something like that resonates.

“Dialogue readiness” with the Taliban as with the Mullahs

This is entirely in the interest of the Holy Warriors, who, due to their own inability, are now using it as an argument to remain “dialogue ready”. Because the de facto hostages, among whom, are still hundreds of German and Afghan ex-Bundeswehr [German army] local forces, as well as diplomats and co-workers of aid organizations stuck in Afghanistan, and in addition, the Taliban also got a huge weapon arsenal free of charge, and have an ideal negotiating position.

In addition: In the future Islamic Emirate of Afghanistan, the Stone Age warriors also have learned since 2001: They don’t need open confrontation anymore, rather, thanks to the suicidal naïveté of the West, they have long since placed their fifth column in the Western kuffar states, more effective than any military success or any secret intelligence infiltration would have allowed. Over half a million Afghans live in Germany alone, a large number of whom have been “Merkel guests” for the last five or six years. Nobody knows how many of them are submarines connected to the Taliban or other extremist Islamist groups.

It is characteristic of these sleepers to remain inconspicuous for years, and then be activated when necessary. And now, with the recent fall of the country, nobody can say how many of the Afghans reaching Germany are terrorist time bombs. This is not about prejudice or general suspicion, rather about a fully objective and sober consideration of the facts, which touches on our direct security interests. The day before yesterday, Interior Minister Seehofer counted about five million possible refugees, but even if it is only a tenth of that, this is sufficient to be the final straw for Germany, not only for integration and migration policy, but for becoming an Islamic high-risk area with 365-day critical terror incident alert status.

Code Red alarm for the internal security of Germany

Even under the assumption that only one in a thousand of those taken in is a Taliban danger, this would mean alarm code red for our internal security. The actual number could clearly be higher — especially since the Taliban obviously will send their people among the asylum-seekers to the West who can be turned on and off. Mohammed and company send greetings.

This assessment was recognized by realists worldwide and followed with concern — not, however, naturally, by German policy, which has not only shown the world that they are at the top in their insane and no-upper-limits acceptance of the refugee movement, but also in their production — as was proven in Afghanistan, where a totally failed foreign and security policy reliably helped prepare the next exodus.

Colin Clarke from the US think tank Soufan Center in New York points out that the victory of the Taliban will give the jihadists “an enormous boost”. “They now believe that the foreign powers can be driven out, even a great power like the USA,” the political scientist told N-TV. Clarke anticipates that Islamists will exploit the example of Afghanistan in their propaganda, especially before the approaching 20th anniversary of the attacks of 11 September in New York. “That will strengthen the morale of the jihadists from North Africa to Southeast Asia,” says Clarke. And, naturally, here in Germany. With every major Afghan community according to the number of people who will be accepted here, the acceptance of sharia and jihad also increases here. And with some “luck”, the fight for the next Caliphate will soon be carried out on our streets. The Merkel government has done great work.

11 thoughts on “The Triumph of the Taliban”