Last Wednesday I posted Boris Reitschuster’s video report showing the way he was manhandled by German police during an anti-lockdown protest.

Some protesters fared much worse at the hands of the Corona Stasi than he did. The following article discusses a video in which police can be seen smashing a young man’s face into the pavement repeatedly, leaving him covered with blood.

Many thanks to Hellequin GB for translating this article from PolitikStube (see the original article for the video):

Berlin: More and more cases of excessive police violence have been documented

Here the abusive officer even had to be held back by his colleagues, because he repeatedly smacked the defenseless man’s face into the pavement and this is what it looks like. 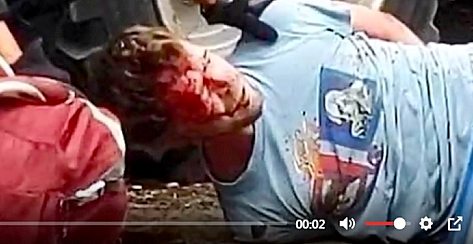 The abused person was accused of “freeing prisoners” and if everyone were to do that (as in France) the police would have to flee (as in France).

Hence the over-hard use of violence, so that nobody does that.

So be frightened off, or follow the example of the brave young man?

4 thoughts on “More on the Corona Stasi”