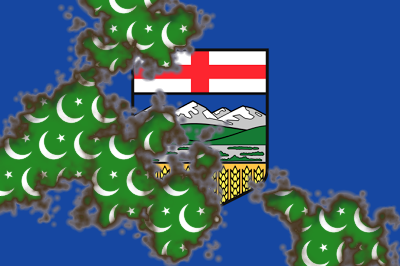 DL, who provided the tip for my earlier post about the grooming gang operating in Alberta, sends this follow-up material about the cultural enrichment of Alberta, and its enabling by white lefties:

You will notice that the reporter referred to the perps as “Albertans”. The guy who did that was Ryan White of CTV/Bell Media.

There was a previous incident in Lethbridge with a Muslim Pakistani National by the name of “Wijdan Yasir”. Wijdan was released by Chief Crown Prosecutor Vaughan Hartigan on a “no cash bail”.

The perp Wijdan Yasir jumped his “no cash” bail and ended up in Lethbridge court on the sex assault charges before trial on a matter of “non appearance”. Once again, with Chief Crown Prosecutor Vaughan Hartigan in oversight, incredibly in spite of non-appearance, Wijdan Yasir was again released on a “no cash” bail.

Here is Ezra’s / Rebel News coverage of the Wijdan Yasir story and the refusal of Mass Media to post Yasir’s details.

Of concern is that the Chief Crown Prosecutor Vaughan Hartigan who oversaw the mishandling of the bail for Yasir has now been promoted to a justice on the Alberta Court of Queens Bench.

Notice in the court bio that Hartigan is sympathetic to “non traditional” sentencing for Indians, a hard Leftist prosecutor, now a judge in Alberta’s superior court.

2 thoughts on “Follow-Up on the “Albertan” Rapists”