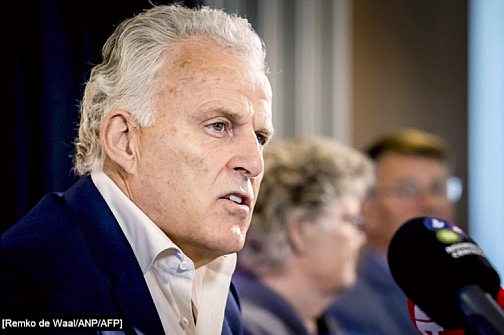 I wrote last week about the shooting of Peter R. de Vries, a Dutch investigative journalist who was shot in the head, most likely by a member of the Mocro Mob, on the street in Amsterdam.

Today Mr. De Vries died of his wounds. Many thanks to Gary Fouse for translating this article from De Telegraaf:

Amsterdam: Peter R. de Vries died on Thursday, July 15. The crime reporter was seriously wounded last Tuesday evening when he was shot on the Lang Leidsedwarsstraat in Amsterdam. De Vries was 64.

The family and his partner announced the following: “Peter fought until the end, but was not able to win the battle. He died surrounded by the people who loved him. Peter lived according to his conviction: ‘On bended knee is no way to be free’. We are immensely proud of him and, at the same time, inconsolable.”

The attack happened around 7:30pm on the Lange Leidsedwarsstraat, in the area of the Leidseplein near a parking garage. About 100 meters away sits the studio of RTL Boulevard, where de Vries was present that evening. Images of a bloodied de Vries quickly spread.

Two suspects are still in custody because of the shooting. They are a 35-year-old Pole from Maurik in Gelderland and a 21-year-old man from Rotterdam. The latter was allegedly the shooter; the Pole is believed to have driven the getaway car. The police conducted house searches in Maurik, Tiel, and Rotterdam and seized data processors and ammunition.

As yet little is clear concerning the background of the murder. The attorney Inez Weski complained that the media too easily point to Ridouan Taghi, whom she is defending in the notorious Marengo murder trial. Taghi is the chief suspect in that trial. He is believed to be the one who gave the order for a series of murders against the backdrop of the international cocaine business.

De Vries is the confidant of Nabil B., and worked in that role with the two current attorneys of the prosecution witness. It was often said in the corridors that his advisory role became fatal for him. As far as is known, he had no security because he didn’t want it.

Peter R. de Vries began his journalistic career with De Telegraaf right after middle school. A Hague murder case that he worked on awakened his interest in crime journalism. In the 35 years that followed, he investigated more than 500 murder files and grew into one of the most well-known crime journalists in the country.

15 thoughts on “The Execution of an Investigative Journalist”